The Japan Air Self-Defense Force (航空自衛隊, Kōkū Jieitai?), or JASDF, is the aviation branch of the Japan Self-Defense Forces - responsible for the defense of Japanese airspace and for other aerospace operations.[2] The JASDF carries out combat air patrols around Japan, while also maintaining an extensive network of ground and air early-warning radar systems. The branch also has an aerobatic team known as Blue Impulse and has recently[when?] become involved in providing air transport in several UN peacekeeping missions.

The Air Defense Command has northern, central, and western regional headquarters located at Misawa, Iruma, and Kasuga, respectively and the Southwestern Composite Air Division based at Naha on Okinawa. All four regional headquarters control surface-to-air missile units of both the JASDF and the JGSDF located in their respective areas. 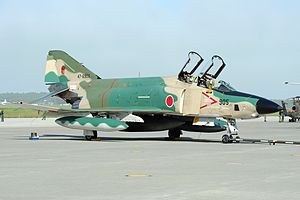 The JASDF maintains an integrated network of radar installations and air defense direction centers throughout the country known as the Basic Air Defense Ground Environment. In the late 1980s, the system was modernized and augmented with E-2C Hawkeye airborne early warning aircraft. The nation relies on fighter-interceptor aircraft and surface-to-air missiles to intercept hostile aircraft. Both of these systems were improved from the beginning of the late 1980s. Outmoded aircraft were replaced in the early 1990s with more sophisticated models, and Nike-J missiles have been replaced with the modern Patriot PAC-2 and PAC-3 system. The JASDF also provides air support for ground and sea operations of the JGSDF and the JMSDF and air defense for bases of all the forces. Base defenses were upgraded in the late 1980s with new surface-to-air missiles, modern anti-aircraft artillery and new fixed and mobile aircraft shelters. 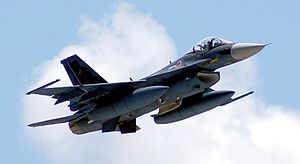 An F-2 taking off from the runway at Andersen Air Force Base, Guam 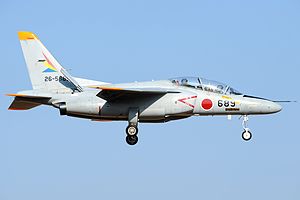 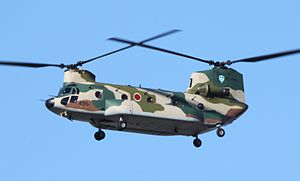 A CH-47J from Iruma Air Base