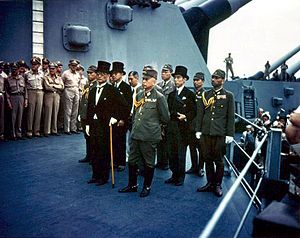 Representatives of Japan stand aboard USS Missouri prior to signing of the Instrument of Surrender.

The Japanese Instrument of Surrender was the written agreement that formalized the surrender of the Empire of Japan, marking the end of World War II. It was signed by representatives from the Empire of Japan, the United States of America, the Republic of China, the United Kingdom of Great Britain and Northern Ireland, the Union of Soviet Socialist Republics, the Commonwealth of Australia, the Dominion of Canada, the Provisional Government of the French Republic, the Kingdom of the Netherlands, and the Dominion of New Zealand. The signing took place on the deck of USS Missouri in Tokyo Bay on September 2, 1945.

The date is sometimes known as Victory over Japan Day, although that designation more frequently refers to the date of Emperor Hirohito's Gyokuon-hōsō (Imperial Rescript of Surrender), the radio broadcast announcement of the acceptance of the terms of the Potsdam Declaration at noon Japan Standard Time on August 15. 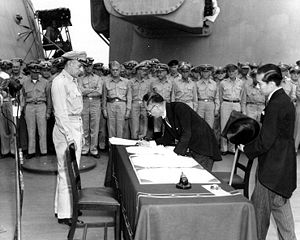 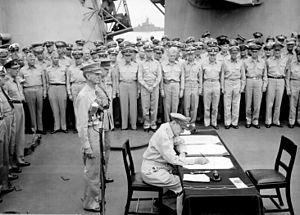 The ceremony aboard the deck of the Missouri lasted twenty three minutes and was broadcast throughout the world. The instrument was first signed by the Japanese foreign minister Mamoru Shigemitsu "By Command and on behalf of the Emperor of Japan and the Japanese Government" (9:04 am).[1] General Yoshijirō Umezu, Chief of the Army General Staff, then signed the document "By Command and on behalf of the Japanese Imperial General Headquarters" signed (9:06 am).[2][3]

After MacArthur's signature as Supreme Commander, the following representatives signed the instrument of surrender on behalf of each of the Allied Powers:

On September 6, Colonel Bernard Theilen took the document and an imperial rescript to Washington, D.C., and presented them to President Harry S. Truman in a formal White House ceremony the following day. The documents were then exhibited at the National Archives.

Flags at the ceremony 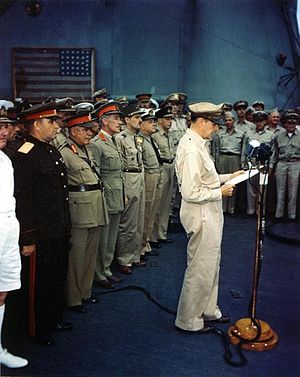 Commodore Perry's flag was flown from Annapolis, Maryland to Tokyo for display at the surrender ceremonies which officially ended World War II.

The deck of the Missouri was furnished with two American flags. A commonly heard story is that one of the flags had flown over the White House on the day Pearl Harbor was attacked. However, Captain Stuart Murray of USS Missouri explained:

"At eight o’clock we had hoisted a clean set of colors at the mainmast and a clean Union Jack [of the United States] at the bow as we were at anchor, and I would like to add that these were just regular ship’s flags, GI issue, that we’d pulled out of the spares, nothing special about them, and they had never been used anywhere so far as we know, at least they were clean and we had probably gotten them in Guam in May. So there was nothing special about them. Some of the articles in the history say this was the same flag that was flown on the White House or the National Capitol on 7 December 1941, the attack on Pearl Harbor, and at Casablanca, and so forth, also MacArthur took it up to Tokyo and flew it over his headquarters there. The only thing I can say is they were hard up for baloney, because it was nothing like that. It was just a plain ordinary GI-issue flag and a Union Jack. We turned them both into the Naval Academy Museum when we got back to the East Coast in October. "The only special flag that was there was a flag which Commodore Perry had flown on his ship out in that same location 82 years before [sic: the actual number of years was 92]. It was flown out in its glass case from the Naval Academy Museum. An officer messenger brought it out. We put this hanging over the door of my cabin, facing forward, on the surrender deck so that everyone on the surrender deck could see it."

That special flag on the veranda deck of the Missouri had been flown from Commodore Matthew Perry's flagship in 1853–54 when he led the U.S. Navy's Far East Squadron into Tokyo Bay to force the opening of Japan's ports to foreign trade. MacArthur was a direct descendant of the New England Perry family and cousin of Commodore Matthew Perry.

Photographs of the signing ceremony show that this flag is displayed backward—reverse side showing (stars in the upper right corner). This was because American flags on the right of an object plane, ship, or person have the stars on the upper right corner, to look like the flag is heading into battle—as if attached to a pole and someone is carrying it. Stars in the upper left of a flag displayed on the right side of the object would make the flag look like it was going away from battle. The cloth of the historic flag was so fragile that the conservator at the U.S. Naval Academy Museum directed that a protective backing be sewn on it, leaving its "wrong side" visible; and this was how Perry's 31-star flag was presented on this unique occasion.[23]

A replica of this historic flag can be seen today on the Surrender Deck of the Battleship Missouri Memorial in Pearl Harbor. This replica is also placed in the same location on the bulkhead of the veranda deck where it had been initially mounted on the morning of September 2, 1945,[23] by Chief Carpenter Fred Miletich.[1] The original flag is still on display at the Naval Academy Museum, as is the table and tablecloth upon which the instrument of surrender was signed, and the original bronze plaque marking the location of the signing (which was replaced by two replicas in 1990).

We, acting by command of and in behalf of the Emperor of Japan, the Japanese Government and the Japanese Imperial General Headquarters, hereby accept the provisions set forth in the declaration issued by the heads of the Governments of the United States, China, and Great Britain on 26 July 1945 at Potsdam, and subsequently adhered to by the Union of Soviet Socialist Republics, which four powers are hereafter referred to as the Allied Powers.

We hereby proclaim the unconditional surrender to the Allied Powers of the Japanese Imperial General Headquarters and of all Japanese Armed Forces and all Armed Forces under Japanese control wherever situated.

We hereby command all Japanese forces wherever situated and the Japanese people to cease hostilities forthwith, to preserve and save from damage all ships, aircraft, and military and civil property, and to comply with all requirements which may be imposed by the Supreme Commander for the Allied Powers or by agencies of the Japanese Government at his direction.

We hereby command all civil, military, and naval officials to obey and enforce all proclamations, orders, and directives deemed by the Supreme Commander for the Allied Powers to be proper to effectuate this surrender and issued by him or under his authority; and we direct all such officials to remain at their posts and to continue to perform their non-combatant duties unless specifically relieved by him or under his authority.

We hereby undertake for the Emperor, the Japanese Government, and their successors to carry out the provisions of the Potsdam Declaration in good faith, and to issue whatever orders and take whatever action may be required by the Supreme Commander for the Allied Powers or by any other designated representative of the Allied Powers for the purpose of giving effect to that declaration.

The authority of the Emperor and the Japanese Government to rule the State shall be subject to the Supreme Commander for the Allied Powers, who will take such steps as he deems proper to effectuate these terms of surrender.

Accepted at TOKYO BAY, JAPAN at 09.08 on the SECOND day of SEPTEMBER, 1945, for the United States, Republic of China, United Kingdom and the Union of Soviet Socialist Republics, and in the interests of the other United Nations at war with Japan.

The Japanese copy of the treaty varied from the Allied in the following ways:

The Allied copy of the Instrument is at the United States National Archives Building in Washington, D.C.. A replica of the Japanese version can be viewed at the Edo-Tokyo Museum in Tokyo.

As witnesses, American general Jonathan Wainwright, who had surrendered the Philippines, and British lieutenant-general Arthur Percival, who had surrendered Singapore, received two of the six pens used by General MacArthur to sign the instrument. Another pen went to the West Point military academy, and one to MacArthur's aide. All of the pens used by MacArthur were black, except the last, which was plum-colored and went to his wife. A replica of it, along with copies of the instrument of surrender, is in a case on Missouri by the plaque marking the signing spot. The model of the USS Missouri in the National Museum of the United States Navy at the Washington Navy Yard, has a scale replica of the signing table in the correct location.