Japan at the Last Glacial Maximum in the Late Pleistocene about 20,000 years ago black outline indicates present-day Japan

The Japanese Paleolithic period (旧石器時代, kyūsekki jidai?) is the period of human inhabitation in Japan that lasted from around 40,000 BC[1] to 14,000 BC,[2] which corresponds to the beginning of the Mesolithic Jōmon period. The 35,000 BC date is most generally accepted:[3] Any date of human presence before 35,000 BC is controversial, with artifacts supporting a pre-35,000 BC human presence on the archipelago being of questionable authenticity.[3]

The earliest human bones were discovered in Hamamatsu, Shizuoka. Radiocarbon dating has shown that the fossils date back to around 14,000–18,000 years ago. 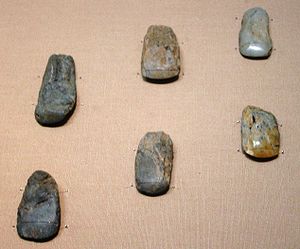 The Japanese Paleolithic is also unique in that it incorporates the earliest known ground stone tools and polished stone tools in the world,[4] dated to around 30,000 BC, a technology typically associated with the beginning of the Neolithic, around 10,000 BC, in the rest of the world. It is not known why such tools were created so early in Japan, although the period is associated with a warmer climate worldwide (30,000–20,000 before present), and the islands may have particularly benefited from it.[citation needed]

The Paleolithic populations of Japan, as well as the later Jōmon populations, appear to relate to an ancient Paleo-Asian group which occupied large parts of Asia before the expansion of the populations characteristic of today's people of China, Korea, and Japan.[citation needed]

Skeletal characteristics point to many similarities with other aboriginal people of the Asian continent. Dental structures belong to the Sundadont group, mainly distributed in ancient populations of South-East Asia (where current populations belong to the Sinodont group). Skull features tend to be stronger, with comparatively recessed eyes.

The aboriginal populations of the Ainu, today mostly confined to the northern island of Hokkaidō, appear to be the descendants of these Paleolithic populations, and display features that have, in the past, been interpreted as Caucasoid, but today tend to be considered more generally as part of that early Paleolithic human stock.

Genetic analysis on today's populations is not clear-cut and tends to indicate a fair amount of genetic intermixing between the earliest populations of Japan and later arrivals (Cavalli-Sforza). It is estimated that 10 to 20% of the genetic capital of the Japanese population today derives from the aboriginal Paleolithic-Jōmon ancestry, with the remainder coming from later migrations from the continent, especially during the Yayoi.

Archaeology of the Paleolithic period

The study of the Paleolithic period in Japan was not begun until quite recently: the first Paleolithic site was discovered right after the end of World War II. Due to the previous assumption that humans did not live in Japan before the Jōmon period, excavations usually stopped at the beginning of the Jōmon stratum (14,000 BC), and were not carried on further. However, since that first Paleolithic find by Tadahiro Aizawa, around 5,000 Paleolithic sites have been discovered, some of them at existing Jōmon archaeological sites.

The study of the Japanese Paleolithic period is characterized by a high level of stratigraphic information due to the volcanic nature of the archipelago: large eruptions tend to cover the islands with levels of ash, which are easily datable and can be found throughout the country as a reference. A very important such layer is the AT (Aira-Tanzawa) pumice, which covered all Japan around 21,000–22,000 years ago.

In 2000 the reputation of Japanese archaeology of the Paleolithic was heavily damaged by a scandal, which has become known as the Japanese Paleolithic hoax. The Mainichi Shimbun reported the photos in which Shinichi Fujimura, an archaeologist in Miyagi Prefecture, had been planting artifacts at the Kamitakamori site, where he "found" the artifacts the next day. He admitted the fabrication in an interview with the newspaper. The Japanese Archaeological Association disaffiliated Fujimura from its members. A special investigation team of the Association revealed that almost all the artifacts which he had found were his fabrication.

Since the discovery of the hoax, only a few sites can tentatively date human activity in Japan to 40,000–50,000 BC, and the first widely accepted date of human presence on the archipelago can be reliably dated circa 35,000 BC.[3]