Kōtetsu (甲鉄?, literally "Ironclad"), later renamed Azuma (東?, "East") was the first ironclad warship of the Imperial Japanese Navy. Built in France in 1864 for the Confederate States Navy as CSS Stonewall, and acquired from the United States in February 1869, she was an ironclad ram warship. She had a decisive role in the Naval Battle of Hakodate Bay in May 1869, which marked the end of the Boshin War, and the complete establishment of the Meiji Restoration.

Her sister ship Cheops was sold to the Prussian Navy, becoming the Prinz Adalbert.

Kōtetsu was built by shipbuilder Lucien Arman in Bordeaux, France. Originally named Sphynx,[1][2] this ship was initially built for the Confederate Navy during the American Civil War.

In June 1863 John Slidell, the Confederate commissioner to France, asked Emperor Napoleon III in a private audience if it would be possible for the Confederate government to build ironclad warships in France. Arming ships of war for a recognized belligerent like the Confederate States would have been illegal under French law, but Slidell and Confederate agent James D. Bulloch were confident that the French emperor would be able to circumvent his own laws more easily than could the British government. Napoleon III agreed to the building of ironclads in France on the condition that their destination remain a secret.[3] The following month Bulloch entered a contract with Lucien Arman, an important French shipbuilder and a personal confidant of Napoleon III, to build a pair of ironclad rams capable of breaking the Union blockade. To avoid suspicion, the ships' guns were manufactured separately in England and they were named Cheops and Sphynx to encourage rumors that they were intended for the Egyptian navy.[4]

Prior to delivery, however, a shipyard clerk walked into the U.S. Minister's office in Paris and produced documents which revealed that L'Arman had fraudulently obtained authorization to arm the ships and was in contact with Confederate agents.[5] The French government blocked the sale under pressure from the United States, but L'Arman was able to sell the ships illegally to Denmark and Prussia, which were then fighting on opposite sides of the Second Schleswig War. Cheops was sold to Prussia as Prinz Adalbert, while Sphynx was sold to Denmark under the name Stærkodder.

Manned by a Danish crew, the ship left Bordeaux for its shakedown cruise on June 21, 1864. The crew tested the vessel while final negotiations were being conducted between the Danish Naval Ministry and L'Arman. Intense haggling over the final price and a disagreement over compensation from L'Arman for late delivery led to his calling off the deal on October 30. The Danish government refused to relinquish the vessel, claiming confusion in regards to the negotiations.[6] 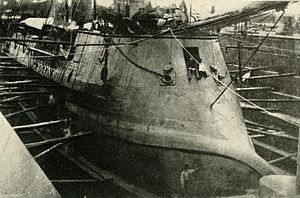 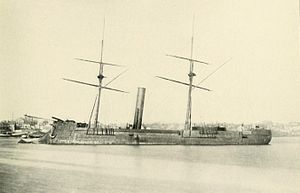 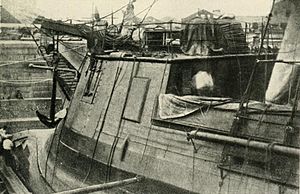 On January 6, 1865 the vessel took on a Confederate crew at Copenhagen under the command of Captain T. J. Page, CSN[7] and was recommissioned the CSS Stonewall while still at sea.[8]

The arrival of the "formidable" Stonewall in America was dreaded by the Union, and several ships tried to intercept her, among them the USS Kearsarge and the USS Sacramento. Stonewall sprang a leak, however, after leaving Quiberon, Brittany and Captain Page steamed her into Spain for repairs. In February and March, USS Niagara and Sacramento kept watch from a distance as Stonewall lay anchored off Corunna during February 1865. On March 24 Captain Page steamed the Stonewall out to sea, challenging the U.S. Navy vessels, which turned and fled, fearful of engaging the ironclad. Finding that the enemy had run, Captain Page steamed for Lisbon, intending to cross the Atlantic Ocean from there and attack at Port Royal, the base of Major General Sherman's attack on South Carolina.[7]

Stonewall reached Nassau on May 6, and then sailed on to Havana, Cuba, where Captain Page learned of the war's end. There he decided to turn her over to the Spanish Captain General of Cuba for the sum of $16,000.[9] The vessel was then turned over to United States authorities in return for reimbursement of the same amount.[10] She was temporarily de-commissioned, stationed at a U.S. Navy dock, until she was offered for sale to the Japanese government of the Tokugawa shogunate.

Kōtetsu was supposed to be delivered to the Tokugawa shogunate in 1868, in order to reinforce the ongoing modernization of its army and navy. US$30,000 had already been paid, and the remaining US$10,000 were to be paid on delivery. When the Boshin War between the shogunate and pro-Imperial forces broke out however, Western powers took a neutral stance, retrieved any military advisors they had in Japan, and stopped the delivery of military material, including the delivery of Kōtetsu to the shogunate. The ship actually arrived under Japanese flag, but US Resident-Minister Robert B. Van Valkenburg ordered her put back under American flag on arrival in Japan under a caretaker crew of the US naval squadron then stationed there.[11]

Kōtetsu was finally delivered to the new Meiji government in February 1869. She was immediately put to use and dispatched with seven other steam warships to the northern island of Hokkaidō, to fight the remnant of the Shogun's forces, who were trying to form an independent Ezo Republic there, with the help of French ex-military advisors. On March 25, 1869, in the Naval Battle of Miyako Bay, Kōtetsu successfully repulsed a surprise night attempt at boarding by the rebel Kaiten (spearheaded by survivors from the Shinsengumi), essentially thanks to the presence of a Gatling gun on board. 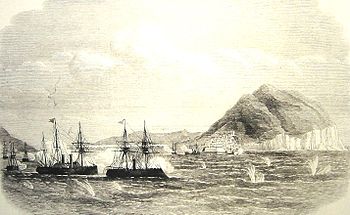 Kōtetsu leading the line of battle, at the Naval Battle of Hakodate.

She then participated in the invasion of Hokkaidō and various naval engagements in the Naval Battle of Hakodate Bay. Kōtetsu was renamed Azuma in 1871 and remained in military service until 1888, when she was turned to non-combat harbor service. Kōtetsu was well-armed with casemated rotating turret guns, and considered a "formidable" and "unsinkable" ship in her time. She could sustain direct hits without her armour being pierced, and prevail against any wooden warship. In effect, Japan was thus equipped with advanced ironclad warships only ten years after the launch of the first ocean-going ironclad warship in history, the French Navy's Gloire, launched in 1859.