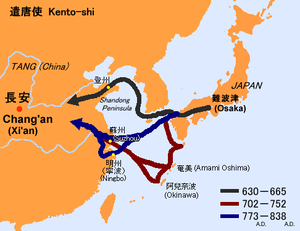 Possible routes of embassy vessels to the Tang dynasty.

The Japanese Missions to Imperial China were diplomatic embassies which were intermittently sent to the Chinese court. Any distinction amongst diplomatic envoys sent from the Imperial Japanese court or from any of the Japanese shogunates was lost or rendered moot when the ambassador was received in the Chinese capital.

Extant records document missions to China between the year of 607 and 894. The composition of these Imperial missions included members of the aristocratic kuge and Buddhist priests. These missions led to the importation of Chinese culture including advances in sciences and technologies. These diplomatic encounters produced the beginnings of a range of Schools of Buddhism in Japan, including Zen.

From the sinocentric perspective of the Chinese Court in Chang'an, the several embassies sent from Kyoto were construed as tributaries of Imperial China; but it is not clear that the Japanese shared this view.[1]

China seems to have taken the initiative in opening relations with Japan. Sui Emperor, Yangdi (kensui taishi) dispatched a message in 605 that said:

Prince Shōtoku responded by sponsoring a mission led by Ono no Imoko in 607. The Prince's own message contains the earliest written instance in which the Japanese archipelago is named "Nihon," literally, sun-origin.[3] The salutation said:

The Imperial embassies to Tang dynasty (遣唐使, Kentō-shi?) are the best known (total 13 times); they ended in 894. At this time, ambassadors had been appointed; and they were about to depart for China. However, the mission was stopped by Emperor Uda in 894 (Kanpyō 6, 8th month) because of reports of unsettled conditions in China.[5] The emperor's decision-making was informed by what he understood as persuasive counsel from Sugawara Michizane.[6]

Envoys to the Sui court

Japanese envoys to the Sui court were received as ambassadors:

Envoys to the Tang court

Japanese envoys to the Tang court were received as ambassadors: Three missions to the Tang court were dispatched during the reign of Emperor Kōtoku.[12] Emperor Kammu's planned mission to the Tang court in 804 (Enryaku 23) included three ambassadors and several Buddhist priests, including Saichō (最澄?) and Kūkai (空海?); but the enterprise was delayed until the end of the year. The ambassadors returned in the middle of 805 (Enryaku 24, 6th month). They were accompanied by the monk Saichō, also known by his posthumous name Dengyō Daishi (伝教大師?), whose teachings would develop into the Tendai school of Japanese Buddhism.[13] In 806 (Daidō 1, 8th month), the return of the monk Kūkai, also known posthumously as Kōbō-Daishi (弘法大師?), marks the beginning of what would develop into the Shingon school of Japanese Buddhism.[14]

New ambassadors to China were appointed by Emperor Ninmyō in 834, but the mission was put off.

In China, a steady and conservative Confucianist Song dynasty emerged after the end of the Tang dynasty and subsequent period of disunity during the Five Dynasties and Ten Kingdoms period. During this time, although travel to China was generally safe, Japanese rulers believed there was little to learn from the Song, and so there were no major embassy missions to China.

Ancient Japan was called Wa, which had a primitive culture when compared to Tang culture. The Tang folks referred to Wa as 東夷 (Eastern barbarians).

From 630 onward, Wa sent large groups of monks, students and government officials, up to 600 each time, to the Tang capital of Chang'an to learn the then advanced production technology, social system, history, philosophy, arts and architecture. Among many items adopted by Wa:

Envoys to the Ming court

Japanese envoys to the Ming court were received as ambassadors.[17]

Envoys to the Qing court

During Japan's self-imposed isolation in the Edo period (1603–1868), Japan's vicarious relationships with China evolved through the intermediary of the Kingdom of Ryukyu. Japan's view of external relations was ambivalent.[17]