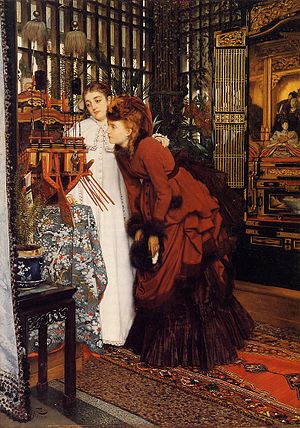 Young Ladies Looking at Japanese Objects by the painter James Tissot in 1869 is a representation of the popular curiosity in all Japanese items that started with the opening of the country in the Meiji Restoration of the 1860s. Large number of artifacts came to the West and were exhibited and sold to an eager audience.

Japonism (from the French Japonisme, first used in 1872[1]) is the influence of Japanese art, fashion and aesthetics on Western culture.[2][3] The term is used particularly to refer to Japanese influence on European art, especially in impressionism.[4] In France the term Japonisme refers to a specific French style which mainly found expression in the fine arts from 1864,[5] while in England it initially had an impact on the decorative arts, with the first documented pieces of furniture in the Anglo-Japanese style completed in 1862, even if the term Anglo-Japanese was used as early as 1851.[6]

From the 1860s, ukiyo-e, Japanese wood-block prints, became a source of inspiration for many European impressionist painters in France and elsewhere, and eventually for Art Nouveau and Cubism. Artists were especially affected by the lack of perspective and shadow, the flat areas of strong color, and the compositional freedom gained by placing the subject off-centre, mostly with a low diagonal axis to the background. 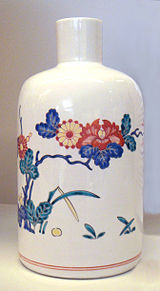 Since the latter 17th century, Japanese ceramics had been exported from Arita and were already quite influential in Europe. To a lesser extent, Japanese lacquer was also influential.[7] Japanese blue and white porcelain was exported and reproduced in Europe, as well as some very characteristic Japanese porcelain styles such as the Kakiemon style, which was widely reproduced throughout Europe, especially in the Rococo period, notably at the Meissen manufactory in Germany and the Chantilly manufactory in France.[8]

Not all Japanese styles were so influential. In the 18th century only a handful of Japanese plants were in Dutch and English gardens, and the Japanese garden style remained as unknown in Europe as Japanese textiles or woodblock prints.[citation needed] 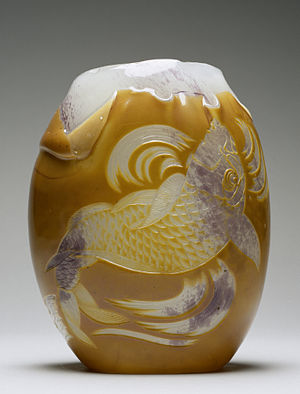 During the Kaei era (1848–1854), after more than 200 years of seclusion, foreign merchant ships of various nationalities again began to visit Japan. Following the Meiji Restoration in 1868, Japan ended a long period of national isolation and became open to imports from the West, including photography and printing techniques. In turn, many Japanese ceramics and ukiyo-e prints, followed by Japanese textiles, bronzes, cloisonné enamels and other arts, came to Europe and America and soon gained popularity.

Japonism started with a craze for collecting Japanese art, particularly ukiyo-e, of which some of the first samples were to be seen in Paris.[9] In about 1856 the French artist Félix Bracquemond first came across a copy of the sketch book Hokusai Manga at the workshop of his printer; they had been used as packaging for a consignment of porcelain. In 1860 and 1861, black-and-white reproductions of ukiyo-e were published in books about Japan. Baudelaire wrote in a letter in 1861, "Quite a while ago I received a packet of japonneries. I've split them up among my friends ...". In 1862, La Porte Chinoise, a shop selling various Japanese goods including prints, opened in the rue de Rivoli, one of the most fashionable shopping street in Paris, and counted numerous artists from this art circle, like James Tissot, among its clients.[5]

Whistler has been considered important in introducing England to Japanese art in the same way as Paris has been considered the center of all things Japanese in the context of Fine Art. Whistler acquired a good collection during his years in Paris before coming to England in 1859. In England the study and purchase of Japanese art by institutions had begun as early as 1852. An essential element of Japanese art, the use of conventional or flat decoration (and lack of perspective, see above) was in fact one of the propositions in Owen Jones The Grammar of Ornament 1856. Decorative art, rather than fine art, when influenced by the principles of the arts of Japan is referred to in England as Anglo-Japanese style, distinct from the Japonisme of France.

Despite Braquemond's initial contact with one of the classic masterpieces of ukiyo-e, most of the prints reaching the west were by contemporary Japanese artists of the 1860s and 1870s. Nevertheless, the prints of Hiroshige, Utamaro or Hokusai soon reached Europe and later influenced Toulouse-Lautrec posters or Van Gogh, who copied them. At the same time, many American intellectuals maintained that Edo prints were a vulgar art form, unique to the period and distinct from the refined, religious, national heritage of Japan known as Yamato-e (大和絵, pictures from the Yamato period, e.g. those of Zen masters Sesshū and Shūbun).[citation needed] 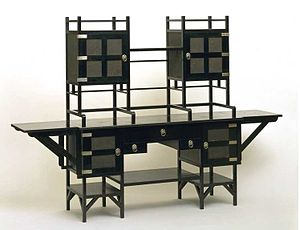 Edward William Godwin designed a number of Japanese-inspired pieces, including this sideboard, 1867–1870

In England, the official Japanese section at the 1862 International Exhibition in London was prepared by Sir Rutherford Alcock (British Minister in Edo from 1859) and included his own collection. This is considered one of the most important events in the history of Japanese art in the West.[10] The English botanist, designer, and theorist Christopher Dresser (1834–1904) bought items from this display and was one of the few designers who visited Japan (in 1876 as a guest of the Japanese nation) and who consistently promoted Japanese art throughout his long career. The ebonized chair exhibited at the 1862 International Exhibition by A.F. Bornemann & Co of Bath, described (and possibly designed) by Dresser as the quaint and unique Japanese character, is considered to be the first documented piece of furniture in the Anglo-Japanese style and was followed by pieces by Edward William Godwin from 1867, including a sideboard of which several versions survive.

In the Paris Exposition Universelle of 1867 Japan was represented by its own national pavilion and much more pieces of Japanese art or inspired by it, like the Service Rousseau by Félix Bracquemond, were presented. This presentation greatly enhanced the interest of artists in this art. Several Japanese art dealers subsequently based themselves in Paris, including Tadamasa Hayashi and Iijima Hanjuro. French collectors, writers, and art critics undertook many voyages to Japan in the 1870s and 1880s, leading to the publication of articles about Japanese aesthetics and the increased distribution of Edo era prints in Europe, especially in France. Among them, the liberal economist Henri Cernuschi and the critic Theodore Duret (both in 1871–1872). Earlier, A good account of Parisian Japonisme can be found in the passages in Edmund de Waal's The Hare with Amber Eyes dealing with Charles Ephrussi. After his trip to Japan in 1885, Pierre Loti published his novel Madame Chrysanthème in 1887, portraying a naval officer who was temporarily married to a geisha while he was stationed in Nagasaki, which later inspired Giacomo Puccini's Madame Butterfly. 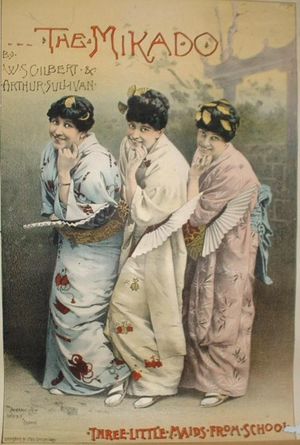 Advertising poster for the comic opera The Mikado, which was set in Japan (1885) 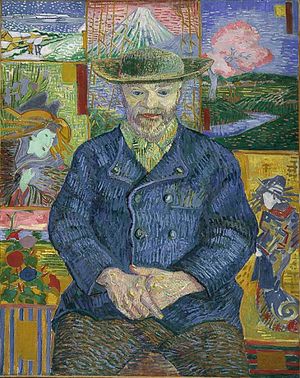 Portrait of Père Tanguy by Vincent van Gogh, an example of Ukiyo-e influence in Western art (1887)

Japanese artists who had a great influence included Utamaro and Hokusai. While Japanese art was becoming popular in Europe, the bunmeikaika (文明開化, "Westernization") led to a loss in prestige for the prints in Japan.

Although works in all media were influenced, printmaking was not surprisingly particularly affected, though lithography rather than woodcut was the most popular medium. Not until Félix Vallotton and Paul Gauguin was woodcut itself much used for japonesque works, and then mostly in black and white.

Several of Van Gogh's paintings imitate ukiyo-e in style and in motif. For example, Le Père Tanguy, the portrait of the proprietor of an art supply shop, shows six different ukiyo-e in the background scene. He painted The Courtesan in 1887 after finding an ukiyo-e by Keisai Eisen on the cover of the magazine Paris Illustré in 1886. At this time, in Antwerp, he was already collecting Japanese prints.[14]

Japonism also had an effect on music. In 1871 Camille Saint-Saëns wrote a one-act opera, La princesse jaune, to a libretto by Louis Gallet, in which a Dutch girl is jealous of her artist friend's fixation on an ukiyo-e woodblock print. In 1885 Gilbert and Sullivan's comic opera The Mikado, was possibly inspired by the Japanese Native Village exhibition in Knightsbridge, London,[15] although the exhibition did not open until after the opera was already in rehearsal. This[clarification needed (what?)] could have been confused with the earlier Japanese village which had been proposed in 1873 following the International Exhibition in Vienna that year and built at Alexandra Palace in North London by 1875. Sullivan used a version of the song "Ton-yare Bushi" by Ômura Masujiro in The Mikado. Giacomo Puccini also made use of the same tune in his opera Madama Butterfly in 1904. The Gilbert and Sullivan opera's name was extended to the 2-8-2 configuration of railroad locomotives after a set of these was built for the Nippon Railway of Japan in 1897, during the Japan craze.[16]

Many characteristics of Japanese art influenced these artists. In the Japonisme stage, they were more interested in the asymmetry and irregularity of Japanese art. Japanese art consisted of off-centered arrangements with no perspective, light with no shadows, and vibrant colors on plain surfaces. These elements were in direct contrast to Greco-Roman art and were embraced by 19th-century artists, who believed they freed the Western artistic mentality from academic conventions.

Ukiyo-e, with its curved lines, patterned surfaces, and contrasting voids and flatness of their picture-plane, also inspired Art Nouveau. Some line and curve patterns became graphic clichés that were later found in works of artists from all parts of the world. These forms and flat blocks of color were the precursors to abstract art in modernism.

Japonism also involved the adoption of Japanese elements or style across all the applied arts, from furniture, textiles and jewellery to graphic design.

Recent scholarship has shown that the influence of Japanese visual art on early Modernist experiments in Western literature was also highly significant. Ezra Pound began his long engagement with East Asian culture in 1909 with viewings of ukiyo-e prints in the company of Laurence Binyon, curator at London's British Museum, giving rise to a pronounced Imagist tendency to offer poetic visions of Japan through ekphrastic descriptions of such artworks.[17] This tendency is most obvious in the work of Imagist poets such as Richard Aldington, John Gould Fletcher, and Amy Lowell.[18] 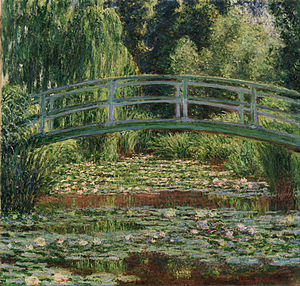 The aesthetic of Japanese gardens was introduced to the English-speaking world by Josiah Conder's Landscape Gardening in Japan (Kelly & Walsh, 1893). It sparked the first Japanese gardens in the West. A second edition was required in 1912.[19] Conder's principles have sometimes proved hard to follow:

"Robbed of its local garb and mannerisms, the Japanese method reveals aesthetic principles applicable to the gardens of any country, teaching, as it does, how to convert into a poem or picture a composition, which, with all its variety of detail, otherwise lacks unity and intent"[20]

Samuel Newsom's Japanese Garden Construction (1939) offered Japanese aesthetic as a corrective in the construction of rock gardens, which owed their quite separate origins in the West to the mid-19th century desire to grow alpines in an approximation of Alpine scree. According to the Garden History Society, the Japanese landscape gardener Seyemon Kusumoto was involved in the development of around 200 gardens in the UK. In 1937 he exhibited a rock garden at the Chelsea Flower Show, and worked on the Burngreave Estate at Bognor Regis, a Japanese garden at Cottered in Hertfordshire, and courtyards at Du Cane Court in London.

The impressionist painter Claude Monet modeled parts of his garden in Giverny after Japanese elements, such as the bridge over the lily pond, which he painted numerous times. By detailing just on a few select points such as the bridge or the lilies, he was influenced by traditional Japanese visual methods found in ukiyo-e prints, of which he had a large collection.[21][22][23] He also planted a large number of native Japanese species to give it a more exotic feeling.