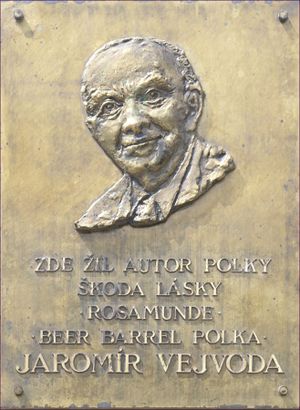 Vejvoda was born and died in Zbraslav. He learned to play the fiddle and flugelhorn in a band led by his father. Later he played these instruments in a military band. He started to compose in the 1920s while he worked as a bartender in a pub owned by his father-in-law. In 1929 he wrote the Modřanská polka named after Modřany, a suburb of Prague where it was played the first time. This catchy tune became a hit and allowed Vejvoda to pursue music as a full-time professional. It was published in 1934 with lyrics Škoda lásky, kterou jsem tobě dala... Publishing house Shapiro Bernstein acquired the rights shortly before World War II and the polka, now the "Beer Barrel Polka" with the English lyrics "Roll out the barrel...", became the most popular song of the Allies in the West, although the original Czech lyrics have a very different meaning and do not speak about beer. After the war this polka became popular around the world, in German-speaking countries as Rosamunde-Polka.

Vejvoda wrote many other hits, such as Kdyby ty muziky nebyly ("If those bands did not exist") and Já ráda tancuju ("I love to dance") but none of them became popular outside of the Czech and German speaking countries.

Vejvoda had three sons: Jaromír, Jiří and Josef. Josef continues the family tradition of being musician, composer and bandleader. His daughter Zuzana is a musical actress.