listen); 23 September 1901 – 10 January 1986) was a Nobel Prize–winning Czechoslovak writer, poet and journalist. In 1984 Jaroslav Seifert won the Nobel Prize in Literature "for his poetry which endowed with freshness, sensuality and rich inventiveness provides a liberating image of the indomitable spirit and versatility of man".[1]

Born in Žižkov, a suburb of Prague in what was then part of Austria-Hungary, Seifert's first collection of poems was published in 1921. He was a member of the Communist Party of Czechoslovakia (KSČ), the editor of a number of communist newspapers and magazines – Rovnost, Sršatec, and Reflektor – and the employee of a communist publishing house.

During the 1920s he was considered a leading representative of the Czechoslovakian artistic avant-garde. He was one of the founders of the journal Devětsil. In March 1929, he and six other writers left the KSČ after signing a manifesto protesting against Bolshevik Stalinist-influenced tendencies in the new leadership of the party. He subsequently worked as a journalist in the social-democratic and trade union press during the 1930s and 1940s.

In 1949 Seifert left journalism and began to devote himself exclusively to literature. His poetry was awarded important state prizes in 1936, 1955, and 1968, and in 1967 he was designated National Artist. He was the official Chairman of the Czechoslovak Writer's Union for several years (1968–70). In 1977 he was one of the signatories of Charter 77 in opposition to the government of the Czechoslovak Socialist Republic.[2]

Seifert was awarded the Nobel Prize in Literature in 1984. Due to bad health, he was not present at the award ceremony, and so his daughter received the Nobel Prize in his name. Even though it was a matter of great importance, there was only a brief remark of the award in the state-controlled media. He died in 1986, aged 84, and was buried at the municipal cemetery in Kralupy nad Vltavou (where his maternal grandparents originated from).

His burial was marked by a high presence of secret police, who tried to suppress any hint of dissent on the part of mourners.[3] 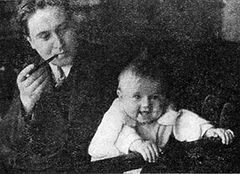