Jarrow (/ˈdʒæroʊ/ or /ˈdʒærə/) is a town north-east England, located on the River Tyne, with a population of 27,526.[1] Historically part of County Durham, in 1974 it became part of the metropolitan county of Tyne and Wear.

In the 8th century, the monastery of Saint Paul in Jarrow was the home of Bede, who is regarded as the greatest Anglo-Saxon scholar and the father of English history. From the middle of the 19th century until 1935, Jarrow was a centre for shipbuilding, and was the starting point of the Jarrow March against unemployment in 1936. Jarrow had a population of 23,405 in 2011.[2]

The Angles re-occupied a 1st-century Roman fort on the site of Jarrow in the 5th century[citation needed] Its name is recorded around AD 750 as Gyruum, representing Old English [æt] Gyrwum = "[at] the marsh dwellers", from Anglo-Saxon gyr = "mud", "marsh". Later spellings are Jaruum in 1158, and Jarwe in 1228. Today Jarrow residents' popular nickname for Jarrow is "Jarra". 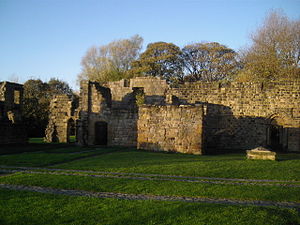 The ruins of St. Paul's Monastery

The monastery of Saint Paul in Jarrow, part of the twin foundation Monkwearmouth-Jarrow Priory, was once the home of the Venerable Bede, whose most notable works include The Ecclesiastical History of the English People and the translation of the Gospel of John into Old English. At the time of its foundation, it was reputed to have been the only centre of learning in Europe north of Rome. In 794 Jarrow became the second target in England of the Vikings, who had plundered Lindisfarne in 793. The monastery was later dissolved by Henry VIII. The ruins of the monastery are now associated with and partly built into the present-day church of St. Paul, which stands on the site. One wall of the church contains the oldest stained-glass window in the world, dating from about AD 600. Just beside the monastery is "Bede's World", a working museum dedicated to the life and times of Bede. Bede's World also incorporates Jarrow Hall, a grade II listed building and significant local landmark. 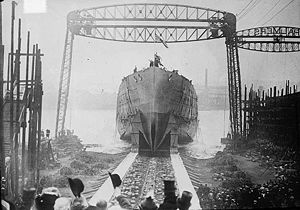 Jarrow remained a small town until the introduction of heavy industries like coal mining and shipbuilding. Charles Mark Palmer established a shipyard – Palmer's Shipbuilding and Iron Company – in 1852 and became the first armour-plate manufacturer in the world. John Bowes, the first iron screw collier, revived the Tyne coal trade, and Palmer's was also responsible for the first modern cargo ship, as well as a number of notable warships. Around 1,000 ships were built at the yard, they also produced small fishing boats to catch eel within the River Tyne, a delicacy at the time. 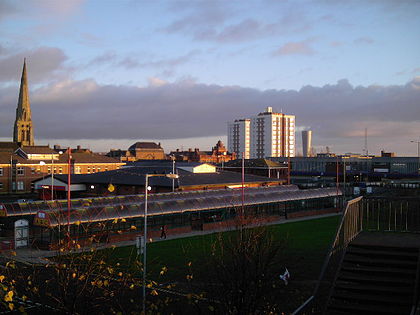 Palmer's employed as much as 80% of the town's working population until its closure in 1933[3] following purchase by National Shipbuilders Securities Ltd. (NSS). This organisation had been set up by Stanley Baldwin's Conservative government in the 1920s, but the first public statement had been made in 1930 whilst the Labour Party was in office. The aim of NSS was to reduce capacity within the British shipyards. In fact Palmer's yard was relatively efficient and modern, but had serious financial problems.[citation needed] As from 1935, Olympic, the sister ship of RMS Titanic, was partially demolished at Jarrow, being towed in 1937 to Inverkeithing, Scotland for final scrapping.

The closure of the shipyard was responsible for one of the events for which Jarrow is best known. Jarrow is marked in history as the starting point in 1936 of the Jarrow March to London to protest against unemployment in Britain. Jarrow MP Ellen Wilkinson wrote about these events in her book The Town That Was Murdered (1939). Some doubt has been cast by historians as to how effective events such as the Jarrow March actually were[4] but there is some evidence that they stimulated interest in regenerating 'distressed areas'.[5] 1938 saw the establishment of a ship-breaking yard and engineering works in the town, followed by the creation of a steelworks in 1939.[6]

The Second World War revived the town's fortunes as the Royal Navy was in need of ships to be built. After 1945 the shipbuilding industries were nationalised. The last shipyard in the town closed in 1980.[7]

In August 2014 a group of mothers from Darlington organised a march from Jarrow to London to oppose the privatisation of the NHS. The march took place in September 2014 and 3,000-5,000 people participated in the event.[8]

Jarrow's needs for secondary education are currently served by Jarrow School, formerly Springfield Comprehensive. Springfield was merged with another of Jarrow's secondary schools, Hedworthfield Comprehensive at Fellgate, following a gradual reduction of the number of new pupils for the yearly intake of 11-year-olds to the point where keeping both schools open was no longer viable. As of 2008 plans to revamp Jarrow School have come into action. Building work has now began with aims of turning the school into a modern learning facility with Specialist Engineering Status. The head teacher at the school plans to improve the school's grade point average, by improving the learning facilities, costing millions of pounds. 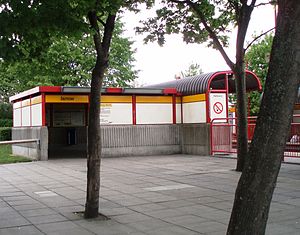 Jarrow is reached from the south by the A1(M) via the A194, and is connected to North Tyneside and Northumberland via the Tyne Tunnel.

The nearest major airport is Newcastle Airport, about 10 miles away.

Notable former residents of the town, including Ellen Wilkinson MP, Charles Mark Palmer and William Jobling, have been remembered in the names of beers produced in the Town.

Jarrow is twinned with the following towns, under the umbrella of the South Tyneside town-twinning project which saw individual twinning projects brought together in 1974: