From Infogalactic: the planetary knowledge core
Jump to: navigation, search
This article is about the actor. For the singer, see Jason Isaacs (singer). For the Texas politician, see Jason Isaac.

He is known for his performance as Lucius Malfoy in the Harry Potter films, the brutal Colonel William Tavington in The Patriot and as lifelong criminal Michael Caffee in the American television series Brotherhood.[2]

Though most of his work has been in film and television, it also includes stage performances; most notably as Louis Ironson in Declan Donnellan's 1992 and 1993 Royal National Theatre London premières of Parts One (Millennium Approaches) and Two (Perestroika) of Tony Kushner's Pulitzer Prize-winning play Angels in America: A Gay Fantasia on National Themes,[3] and as Ben, one of two hitmen, playing opposite Lee Evans as Gus, in Harry Burton's 2007 critically acclaimed 50th-anniversary revival of Nobel Laureate Harold Pinter's 1957 two-hander The Dumb Waiter at Trafalgar Studios.[1][4][5] He starred in the NBC drama Awake as Detective Michael Britten from March to May 2012.

Jason Isaacs was born on 6 June 1963, in Liverpool, Merseyside, to Jewish parents. His father was a jewellery-maker.[6] Isaacs spent his earliest childhood years in an "insular" and "closely knit" Jewish community of Liverpudlians, of which his Eastern European great-grandparents were founder-members in the leafy Liverpool suburb, Childwall.[7] The third of four sons,[2] Isaacs attended a Jewish school, known then as King David High school and a cheder twice a week as a young adult.[8][9] When he was 11, he moved with his family to Northwest London, attending The Haberdashers' Aske's Boys' School, in Elstree, Hertsmere, in Hertfordshire, where he was in the same year as film reviewer Mark Kermode.[8] He describes his childhood as "preparation" for portraying the "unattractive", villainous characters whom he has most often played.[1] National Front members frequently harassed Isaacs and his friends throughout the 1970s and 1980s.[1][10]

Following his more traditionally inclined brothers, who became respectively a doctor, a lawyer and an accountant,[2] Isaacs studied law at Bristol University (1982–85), but he became more actively involved in the drama society, eventually performing in over 30 plays and performing each summer at the Edinburgh Fringe Festival, first with Bristol University and then, twice, with the National Student Theatre Company. After graduating from Bristol he went immediately to train at London's Central School of Speech and Drama (1985–88).[1][2][11]

After completing his training as an actor, Isaacs almost immediately began appearing on the stage and on television; his film debut was in a minor role as a doctor in Mel Smith's The Tall Guy (1989).[11] He was initially known as a TV actor in the UK, with starring roles in the ITV drama Capital City (1989) and the BBC drama Civvies (1992) and guest roles in series such as Taggart, Inspector Morse, and Highlander: The Series (1993).[11] He also played Michael Ryan in ITV1's adaptation of Martina Cole's novel Dangerous Lady, directed by Jack Woods and produced by Lavinia Warner, in 1995.

On stage he portrayed the "emotionally waffling"[11] gay Jewish office temp Louis Ironson in Tony Kushner's Pulitzer-Prize-winning Angels in America: A Gay Fantasia on National Themes, at the Royal National Theatre, in its London première, performing the role in both parts, Part One: Millennium Approaches, in 1992, and Part Two: Perestroika, in 1993.[3] When auditioning for that role, he told the producers, "Look, I play all these tough guys and thugs and strong, complex characters. In real life, I am a cringing, neurotic Jewish mess. Can't I for once play that on stage?"[9]

His first Hollywood role was alongside Laurence Fishburne in the film Event Horizon in 1997, in which he played a crew member ultimately killed by the protagonist-turned-antagonist acted by Sam Neill. Subsequently, he appeared in the Bruce Willis blockbuster Armageddon (1998).[11] Initially called upon to take a fairly substantial role, Isaacs was eventually cast in a much smaller capacity as a planet-saving scientist so that he could accommodate his commitment to Divorcing Jack (1998), a comedy thriller he was making with David Thewlis.[2]

After portraying a priest opposite Julianne Moore and Ralph Fiennes in Neil Jordan's acclaimed adaptation of Graham Greene's The End of the Affair (1999), Isaacs played the charismatic honourable priest opposite Kirsty Alley in the mini series The Last Don. He then shone as "memorable" villain, Colonel William Tavington, in Roland Emmerich's American Revolutionary War fictional film epic The Patriot (2000).[11] Starring opposite Mel Gibson as the film's hero, and Heath Ledger as Gibson's screen son, Isaacs portrays a sadistic British Army officer who kills Ledger's character, among many other soldiers.[11][12] Although his work in the film earned him comparisons to Ralph Fiennes' portrayal of Nazi Amon Göth in Schindler's List (1993) and mention of a Best Supporting Actor Oscar nomination, reaching beyond being typecast as an historical villain, Isaacs chose to play a drag queen in his next project, Sweet November (2001), a romantic comedy-drama starring Charlize Theron and Keanu Reeves.[2]

Isaacs has appeared in many other films, most notably as Lucius Malfoy in the Harry Potter series of films (2002–2011). Regarding the Harry Potter books by J.K. Rowling, Isaacs has said: "I went off and read the books after the audition and I read the first four books in one sitting – you know – didn't wash, didn't eat, drove around with them on the steering wheel like a lunatic. I suddenly understood why my friends, who I'd thought were slightly backward, had been so addicted to these children's books. They're like crack."[citation needed] In "The Naked and the Dead", an article published in the San Francisco Chronicle, on 26 November 2006, Neva Chonin names the character Lucius Malfoy one of the 12 "Sexiest Men Who Were Never Alive" and Isaacs one of the 13 "Sexiest Men Who Are Real and Alive".[13]

Prior to the making of the film, when asked whether or not he would be in Harry Potter and the Order of the Phoenix (2007), Isaacs replied, "I hope so – you'll have to ask David (producer David Heyman). I can't bear the idea that somebody else would get to wear my Paris Hilton wig, but you never know."[14] Isaacs also talked to J.K. Rowling on the inclusion of Lucius Malfoy in the then unpublished Harry Potter and the Deathly Hallows, so that he would have a part in the seventh and final film: "The character does not appear in the sixth book, Harry Potter and the Half-Blood Prince; but ... [Isaacs joked], 'I fell to my knees and begged ... It didn't do any good. I'm sure she doesn't need plot ideas from me. But I made my point. We'll see. Like everybody else, I'm holding my breath to July to see what's in there. I just want to bust out of prison, that's all. I don't want to stay in Azkaban most of my life.' "[15] Ultimately Isaacs did reprise the role of Malfoy as a cameo appearance in Harry Potter and the Half-Blood Prince (2009), where he is seen in a moving portrait. Afterwards, Isaacs reprised the role again in Harry Potter and the Deathly Hallows – Part 1 (2010) and Part 2 (2011).[16]

Isaacs played the leading role of Sir Mark Brydon, the British Ambassador to the US in the BBC Four miniseries The State Within (2006), for which he was nominated for the Best Performance by an Actor in a Mini-Series or a Motion Picture Made for Television for the 65th Golden Globe Awards.[17][18] On British television, he also portrayed actor Harry H. Corbett in The Curse of Steptoe, part of "a season of new one-off dramas for BBC Four revealing the stories behind some of Britain's best loved television entertainers, and their achievements," first broadcast in March 2008.[19][20] On American television, Isaacs appeared in three episodes of The West Wing in 2004, prior to developing his most notable TV serial role, as Michael Caffee in Brotherhood (2006–08).

Between 2 February and 24 March 2007, Isaacs played Ben, opposite Lee Evans (Gus), in the critically acclaimed 50th-anniversary production of Harold Pinter's The Dumb Waiter, at Trafalgar Studios, in London, his first theatre performance since appearing in The Force of Change (2000).[1][4][5][21][22]

Isaacs played Major Briggs, an American military officer, opposite Matt Damon and Greg Kinnear, in Paul Greengrass's thriller Green Zone (2010), a fictionalised drama set in Iraq after the defeat of Saddam Hussein based on the book Imperial Life in the Emerald City: Inside Baghdad's Green Zone (2006), by Rajiv Chandrasekaran, for which production began in Morocco, in January 2008.[23][24]

In 2007, he was cast in Jan de Bont's then-still-upcoming film Stopping Power, to play its star John Cusack's "nemesis",[25][26] but, on 31 August 2007, Variety reported that the film, also planned for release in 2009, had been cancelled after a financial backer pulled out.[27] Isaacs appeared in one episode of the TV show Entourage in the autumn of 2008 as Fredrick Line. In 2009, he was nominated at the British Academy Television Awards for Best Actor for his role as Harry H. Corbett in The Curse of Steptoe.[28]

On the evening of 2 May 2009, Isaacs performed the role of Ben again, opposite his Brotherhood co-star (and Tony Award winner) Brian F. O'Byrne (as Gus), in a "rehearsed reading" of The Dumb Waiter.[citation needed] Their reading capped off the Harold Pinter Memorial Celebration being curated by Harry Burton (who had directed him and Evans at Trafalgar Studios). This tribute to Harold Pinter co-sponsored by the Martin E. Segal Theatre Center (MESTC), of The Graduate Center of The City University of New York (CUNY), was part of the Fifth Annual PEN World Voices Festival of International Literature, held in New York City, from 27 April to 3 May 2009.[29][30]

Isaacs starred as Detective Michael Britten in the NBC series Awake, which premiered on 1 March 2012, and ended in May 2012. After Britten gets into a terrible car wreck with his family, his dreams begin to take on two alternate realities, one in which his wife died in the crash and one in which his son died. Says Isaacs about the ambitious premise: "There’s no question it's challenging. We’ve got a bunch of very experienced writers who have written things from HBO shows to The X-Files, to 24 and everything in between. And they are challenged. All of them have said that it's the hardest job that they've ever had. But sometimes that's a good thing. … If it comes easily, that they could write in their sleep, I personally wouldn't want to act – and I think the audience wouldn't want to watch."[31] 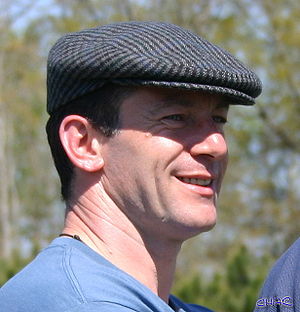 Isaacs at a Masters Celebrity Pro-Am Golf Tournament in 2005

Isaacs has lived with his partner BBC documentary filmmaker Emma Hewitt since 1988. The couple began dating at the Central School, and have two daughters, Lilly and Ruby.[33]

Despite Isaacs' screen celebrity as Lucius Malfoy, he describes himself as maintaining a "calm, sedate and suburban" life[33] and has spoken of travelling to film premières unrecognised on the London Underground, saying "They just think, who's that t*** in black tie? As soon as I get on the red carpet they start screaming and screaming."[1]

Isaacs has described himself a "Jewish man who does almost nothing Jewish in his life".[10] Isaacs spoke in 2009 of being a "huge" supporter of New Labour, praising the government's progress on education, health service and childcare, but criticising its "invasion of a country based on false pretexts".[34]