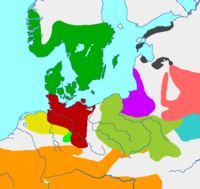 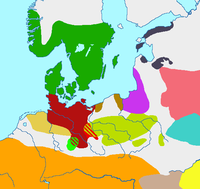 The Jastorf culture was an Iron Age material culture in what are now southern Scandinavia and north Germany, spanning the 6th to 1st centuries BCE, forming the southern part of the Pre-Roman Iron Age. The culture evolved out of the Nordic Bronze Age, through influence from the Halstatt culture farther south. The cultures of the Pre-Roman Iron Age are sometimes hypothesized to be the origin of the Germanic languages. Herwig Wolfram locates the initial stages of Grimm's Law here.[citation needed]

It is named after a site near the village of Jastorf, Lower Saxony (Lua error in Module:Coordinates at line 668: callParserFunction: function "#coordinates" was not found.). The Jastorf culture was characterized by its use of cremation burials in extensive urnfields and link with the practices of the Northern Bronze Age. Archeology offers evidence concerning the crystallization of a group in terms of a shared material culture, in which the (impoverished) Northern Bronze Age continued to exert cultural influence, and in which the northward thrust of Hallstatt into the same area was instrumental, while extensive migrations "should be discounted". No homogeneous contribution to the Germanic-speaking northerners has been determined, while earlier notions holding proto-Germanic peoples to have emigrated from Denmark during the Northern Bronze Age have been abandoned by archaeologists. Jastorf culture extended south to the fringes of the northern Hallstatt provinces, while towards the north a general congruence with the late phases of the Northern Bronze Age can be noted. Gravefields in Schleswig-Holstein, Mecklenburg, western Pomerania, in Brandenburg and in Lower Saxony show continuity of occupation from the Bronze Age far into the Jastorf period and beyond. The specific contributions from the various quarters witnessing the meeting of Celtic and indigenous cultures during the early periods can not be assessed by the present state of knowledge, although a shift to a northern focus has been noted to accompany the dwindling vitality of continental Celtic cultures later on.[1]

Its area was first restricted to northern Lower Saxony and Schleswig-Holstein. It then developed a "very expansive" character (Wolfam 1999), expanding towards the Harz and reaching by about 500 BC Thuringia, lower Silesia, and the lower Rhine,[2] thus covering the southern and western parts of Lower Saxony. In its mature phase, the Jastorf area proper in northern Lower Saxony (Lüneburger Heide, lower Elbe) can be contrasted with the so-called Nienburg (also Harpstedt-Nienburg) group to the west, situated along the Aller and the middle Weser, bordering the Nordwestblock separating it from the La Tène culture proper farther south. The Nienburg group has characteristics of material culture closer to Celtic cultures, and shows evidence of significant contact with the Hallstadt and Latène cultures. Isolated finds are scattered as far as Berlin and Mecklenburg-Vorpommern.

Finds are mostly from tumuli, flat graves and Brandgruben graves. There are few and modest grave goods, with the weapon deposits characteristic of migration period graves completely absent.

The southernmost extent of Germanic cultures beyond Jastorf has recently been accounted for at the final stages of the Pre-Roman Iron Age, with the paucity of Late-Laténe bracelet-types in Thuringia and northeastern Hessen proposed to suggest population movements between the central-Elbe/Saale region, Main-Franconia and the edge of the Alps and to have been triggered by the spread of the Przeworsk culture.[3]