Jatinegara (originally known as Meester Cornelis) is a subdistrict (kecamatan) of East Jakarta, Jakarta, Indonesia. The boundaries of Jatinegara are Bekasi Barat Raya - Bekasi Timur Raya - Jalan I. Gusti Ngurah Rai to the north, Kali Sunter to the east, Kali Malang canal - Jakarta-Cikampek Tollway to the south, and Ciliwung River to the west. The area is also known as Pecinan or Chinatown since the majority of the traders are of Chinese descent In Jatinegara Market.

There is also an administrative village named Jatinegara located in Cakung Subdistrict, but this is not related to the Subdistrict of Jatinegara.

A residence for the princes of the Sultanate of Banten existed in the area in the 17th century. The name Jatinegara came from Jatina Nagara which means "the might of the state", symbolizing the power of the princes of Banten to fight against the Dutch colonials.[1]

During the Dutch colonial period, the area was named Meester Cornelis, after Cornelis Senen, a Calvinist schoolmaster, preacher and landholder from Lontor Island, (Banda Islands). In 1656, Senen was granted land along the Ciliwung, with total area of 5 square kilometers, about 12 km southeast of the fort of Batavia. As a landlord, he received the title Meester. The land was used mainly for forestry. Meester Cornelis Senen died in 1661, but his name stuck and the area was known as Meester Cornelis until Indonesian independence. 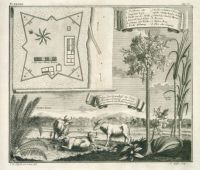 During the 18th century, Meester Cornelis was a military territory, with residential areas, wide roads, and a rural character. A buffalo market, known for its "Thursday Market", was built in the old area of Meester Cornelis in 1706. A fort was built in 1734. The commander of the fort established entertainment facilities around the fort, including a playhouse. In 1746, an encampment for soldiers with malaria was built in this area because of its higher altitude and drier air quality.

An artillery school was built in 1805. In 1810, General Daendels (1762–1818) established this territory as the center of defense against a possible attack by the British. The main point of this defense system was the Meester Cornelis fort. A British attack occurred in 1811. In 1820, the fort was transformed into a prison.

Meester Cornelis Military School was opened in 1852 and closed in 1892. It was not the first military school in the Dutch East Indies, but it was the most successful one. One third of the students were born in the colony, the majority came from the Netherlands, and one tenth were other Europeans, mostly from Germany. Most students were from the middle class. The school was later closed because of financial problems: only one in three students graduated, so the costs per student were unacceptably high.

After the transfer of sovereignty to the Republic of Indonesia on 27 December 1949, Meester Cornelis was renamed Jatinegara.

The subdistrict of Jatinegara is divided into eight Kelurahan or Administrative Villages: