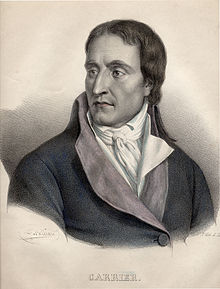 Jean-Baptiste Carrier, lithograph by F.-S. Delpech after a painting by J.-B. Belliard

Jean-Baptiste Carrier (1756 – 16 December 1794) was a French Revolutionary, known for his cruelty to his enemies, especially to clergy.

Carrier was born at Yolet, a village near Aurillac in Upper Auvergne. As the son of a middle class tenant farmer, Jean-Baptiste Carrier and his family survived on income reaped from cultivating the land of a French nobleman. Attending a Jesuit college in his hometown, he was able to pursue a wide variety of career interests. Carrier worked in a law office in Paris until 1785 when he returned to Aurillac, marrying, joining the national guard and becoming a member of the Jacobin Club. In 1790 he was a country attorney (counsellor for the bailliage of Aurillac) and in 1792 became deputy to the National Convention. He was already known as one of the influential members of the Cordeliers club and of that of the Jacobin Club. 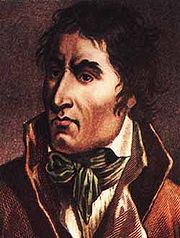 After the subjugation of Flanders he was one of the commissioners nominated in the close of 1792 by the Convention. In the following year he took part in establishing the Revolutionary Tribunal in Nantes. As he was still in the moderate stages of his violent nature, Carrier minded the orders of the convention and set up the tribunal to give prisoners a "fair" trial. He voted for the execution of King Louis XVI of France, was one of the first to call for the arrest of the Duke of Orléans, and took a prominent part in the overthrow of the Girondists (on 31 May). His strong Montagnard affiliation further empowered him to take a stand for violence.

After a mission to Normandy, Carrier was sent, early in October 1793, to Nantes, under orders from the National Convention to suppress the revolt of anti-revolutionists. He established a revolutionary tribunal as mentioned above, and formed what was called the Legion of Marat, to dispose quickly of the masses of prisoners heaped in the jails. The form of trial was soon discontinued, and the victims were sent to the guillotine, shot or disposed of in a more inhumane way. Carrier invented a variety of extremely torturous means of killing. He put large numbers of prisoners on board vessels with trap doors for bottoms, and sunk them in the Loire river. He also lined up hundreds of prisoners in fields and called the National Guard to shoot them down one by one. As Adolphe Thiers wrote, "This frantic wretch imagined that he had no other mission than to slaughter." There may well have been a sexual motive to some of the developments he introduced to the killings, including the proposal that young male and female prisoners be tied together naked before the drownings, a method which was called a "Republican marriage". Carrier's violent means of carrying out orders to suppress the revolts against the Convention were what made him infamous. 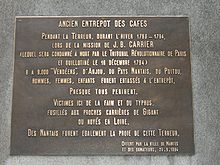 Translation of a landmark sign in Nantes: "Former Coffee Warehouse Jail. During the Terror, during the winter of 1793-1794, at the time of the mission of J.-B. Carrier (who was condemned to death by the Revolutionary Tribunal in Paris and guillotined on 16 December 1794), 8 to 9,000 citizens of the Vendée, Anjou, the Nantes region, and Poitou - men, women, and children - were encarcerated at this jail. Nearly all perished. Victims of starvation and typhus were shot near Gigant quarry or drowned in the Loire. -- The people of Nantes were equal prey to the Terror."

In October and November 1793 Jean Carrier assumed his most famous role as a republican representative to Nantes. In a twenty-page letter to his fellow republicans, Carrier promised not to leave a single counter-revolutionary or monopolist (in reference to hoarders and aristocratic land owners) at large in Nantes.[citation needed] His vigorous action was endorsed by the Committee of Public Safety, and in the following days Carrier undertook the task of drowning the majority of resistance in the Loire. These horrific executions, especially of priests and nuns, as well as women and children, known as the Drownings at Nantes (Noyades) along with his increasing haughty demeanor, gained Carrier a reputation for wanton cruelty. In his mission to Normandy he had been very moderate, and it has been suggested that his mind had become unbalanced by the atrocities committed by the Vendean and royalist armies. He is quoted as being "...one of those inferior and violent spirits, who in the excitement of civil wars become monsters of cruelty and extravagance."[citation needed] As Carrier's violent actions continued, more of the French people began to question his true motives. His paranoia eventually pushed him to ransack public storehouses, mills, and bake houses in an effort to find "military" resistance evidenced in hidden weapons, artillery, and gunpowder. Finding little contraband, he nevertheless burned down buildings of every kind in what he identified as "revolting districts."[citation needed]

Early in 1794 Carrier was recalled to Paris. A few months later, the Thermidorian reaction led to the fall of Robespierre and the Committee of Public Safety. Carrier's position became dangerously exposed. Prisoners he had brought from Nantes were acquitted and released, and denunciations of Carrier's actions increased. On 3 September 1794 Carrier was arrested. At his trial, in the Salle de la Liberté, Carrier was quick to denounce allegations of inhumanity saying, "I took but little share in the policing of Nantes; I was only there in passing, being first at Rennes and later with the army. My principal task was to watch over and see to the victualling of our troops, and for six months I supplied 200,000 men there without its costing the State a halfpenny. Hence I have little information to offer in the matter. I know little or nothing of the accused.".[citation needed] After this statement, a fellow representative (Phélippes) sprang to his feet vocally charging Carrier with drownings, wholesale executions, demolitions, thefts, pillaging, laying waste to Nantes, famine and disorder, and with the butchering of women and children. Men from the Marat Company (the group of soldiers that Carrier used to purge Nantes) were present during the trial, including Perro-Chaux, Lévêque, Bollogniel, Grandmaison, and Mainguet. All these men were appointed directly and indirectly by Carrier and all were part of the Revolutionary Committee of Nantes. The jury that heard Carrier's case was left dumbfounded as the trial closed and passed a unanimous vote for Carrier's execution, which took place on 16 December 1794.