Marshal General Jean-de-Dieu Soult,[1][2] 1st Duke of Dalmatia, (French: [ʒɑ̃dədjø sult]; 29 March 1769 – 26 November 1851) was a French general and statesman, named Marshal of the Empire in 1804 and often called Marshal Soult. Soult was one of only six officers in French history to receive the distinction of Marshal General of France. The Duke also served three times as President of the Council of Ministers, or Prime Minister of France.

Soult's intrigues in the Peninsular War while occupying Portugal earned him the nickname, "King Nicolas", and while he was Napoleon's military governor of Andalusia, Soult looted 1.5 million francs worth of art.[3] One historian called him "a plunderer in the world class."[4] He was defeated in his last offensives in Spain in the Battle of the Pyrenees (Sorauren) and by Freire's Spaniards at San Marcial. Soult was eventually pursued out of Spain and onto French soil, where he was maneuvered out of several positions at Nivelle, Nive, and Orthez, before the Battle of Toulouse.

Soult was born in Saint-Amans-la-Bastide (now called Saint-Amans-Soult, near Castres, in the Tarn department) and named after John of God. He was the son of a country notary named Jean Soult (1726–1779) by his marriage to Brigitte de Grenier. His paternal grandparents were Jean Soult (1698–1772) and Jeanne de Calvet, while his maternal grandparents were Pierre François de Grenier de Lapierre and Marie de Robert. His younger brother Pierre also became a French general.

Well-educated, Soult originally intended to become a lawyer, but his father's death when he was still a boy made it necessary for him to seek employment, and in 1785 he enlisted as a private in the French Army.

File:Portrait jeune de Soult.jpg
Soult as a private in the French Royal Army

Soult's superior education ensured his promotion to the rank of sergeant after six years of service, and in July 1791 he became instructor to the first battalion of volunteers of the Bas-Rhin. By 1794, Soult was adjutant-general (with the rank of chef de brigade). After the Battle of Fleurus of 1794, in which he distinguished himself for coolness, he was promoted to brigadier general by the representatives on mission.

For the next five years, Soult was employed in Germany under Generals Jean-Baptiste Jourdan, Jean Victor Marie Moreau, Jean-Baptiste Kléber and François Lefebvre, and in 1799 he was promoted to general of division and ordered to proceed to Switzerland. It was at this time that he laid the foundations of his military fame; he particularly distinguished himself in General André Masséna's great Swiss campaign, and especially at the Battle of Linth River, fought on the same day that Masséna won the Second Battle of Zurich. He accompanied Masséna to Genoa, and acted as his principal lieutenant throughout the protracted siege of that city, during which he operated with a separate force outside the city walls. Soult was wounded and taken prisoner at Monte Cretto on 13 April 1800.

Marshal of the Empire

The victory at Marengo restored his freedom, and Soult received the command of the southern part of the Kingdom of Naples. In 1802, he was appointed as one of the four generals commanding the consular guard. Though he was one of those generals who had served under Moreau, and who therefore, as a rule, disliked Napoleon Bonaparte, Soult had the wisdom to show his devotion to the ruling power. In consequence, he was appointed, in August 1803, as commander-in-chief of the Camp of Boulogne, and in May 1804 he was made one of the first eighteen Marshals of the Empire. He commanded a corps in the advance on Ulm, and at Austerlitz he led the decisive attack on the Allied centre.

Soult played a great part in many of the famous battles of the Grande Armée, including the Battle of Austerlitz in 1805 and the Battle of Jena in 1806. However, he was not present at the Battle of Friedland because on that same day he was conquering Königsberg. After the conclusion of the Treaties of Tilsit, he returned to France and in 1808 was anointed by Napoleon as 1st Duke of Dalmatia (French: Duc de Dalmatie). The awarding of this honour greatly displeased him, for he felt that his title should have been Duke of Austerlitz, a title which Napoleon had reserved for himself. In the following year, Soult was appointed as commander of the II Corps with which Napoleon intended to conquer Spain. After winning the Battle of Gamonal, Soult was detailed by the emperor to pursue Lieutenant-General Sir John Moore's British army. At the Battle of Coruña, in which Moore was killed, Soult failed to prevent British forces escaping by sea. 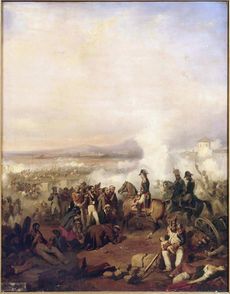 Soult at the First Battle of Porto

For the next four years, Soult remained in Spain engaged in the Peninsular War. In 1809, he invaded Portugal and took Porto, but was isolated by General Francisco da Silveira's strategy of contention. Busying himself with the political settlement of his conquests in French interests and, as he hoped, for his own ultimate benefit as a possible candidate for the Portuguese throne, he attracted the hatred of Republican officers in his army. Unable to move, he was eventually driven from Portugal in the Second Battle of Porto by Lieutenant-General Sir Arthur Wellesley (later made Duke of Wellington), making a painful and almost disastrous retreat over the mountains, pursued by General William Beresford and Silveira. After the Battle of Talavera, Soult was made chief of staff of French forces in Spain with extended powers, and on 19 November 1809, won a great victory at the Battle of Ocana.

In 1810, he invaded Andalusia, which he quickly overran. However, because he then turned to seize Seville, the capture of Cádiz eluded him, saying, "Give me Seville and I will answer for Cádiz."[5] This led to the prolonged and futile Siege of Cadiz, a strategic disaster for the French. In 1811, Soult marched north into Extremadura and took Badajoz. When the Anglo-Portuguese army laid siege to the city, he marched to its rescue and fought and nearly won the famous and bloody Battle of Albuera on 16 May.

In 1812, after Wellington's great victory at Salamanca, Soult was obliged to evacuate Andalusia. In the subsequent Siege of Burgos, he was able to drive Wellington's Anglo-allied Army back to Salamanca. There, the Duke of Dalmatia, as Soult was now known, failed to attack Wellington despite superiority in numbers, and the British Army retired to the Portuguese frontier.[6] Soon after, he was recalled from Spain at the request of Joseph Bonaparte (who had been installed by his brother as King of Spain) with whom, as with the other marshals, he had always disagreed.

In Germany and defending southern France

In March 1813, Soult assumed command of the IV Corps of the Grande Armée and commanded the centre at Lützen and Bautzen, but he was soon sent, with unlimited powers, to the South of France to repair the damage done by the defeat at Vitoria. It is to Soult's credit that he was able to reorganise the demoralised French forces.

His last offensives into Spain were turned back by Wellington in the Battle of the Pyrenees (Sorauren) and by General Manuel Freire's Spaniards at San Marcial. Pursued onto French soil, Soult was maneuvered out of several positions at Nivelle, Nive, and Orthez, before suffering what was technically a defeat at Wellington's hands at the Battle of Toulouse. He nevertheless inflicted severe casualties on Wellington and was able to stop him from trapping the French forces.

After Napoleon's first abdication in 1814, Soult declared himself a royalist, received the Order of Saint Louis, and acted as Minister of War from 26 November 1814 to 11 March 1815. When Napoleon returned from Elba, Soult at once declared himself a Bonapartist, was made a peer of France, and acted as chief of staff to the emperor during the Waterloo campaign, in which role he distinguished himself far less than he had done as commander of an over-matched army.

In his book, Waterloo: The History of Four Days, Three Armies and Three Battles, Bernard Cornwell summarizes the opinions of several historians that Soult's presence in the Army of the North was one of several factors contributing to Napoleon's defeat, because of the animosity between him and Marshal Michel Ney, the other senior commander, and because, in spite of his experience as a soldier, Soult lacked his predecessor Marshal Louis-Alexandre Berthier's administrative skills. The most glaring instance of this was his written order, according to Napoleon's instructions, to Marshal Emmanuel de Grouchy to position his force on the British Army's left flank in order to prevent reinforcement by the Prussians. Cornwell decries the wording of Soult's order as "almost impenetrable nonsense", and Grouchy misinterpreted the order, instead marching against the Prussian rearguard at Wavre. 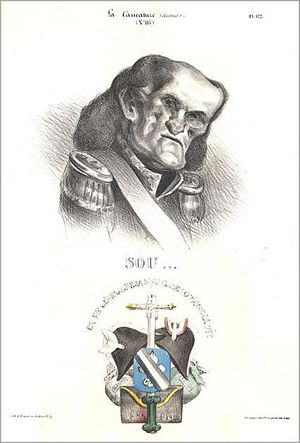 Caricature of the Duke of Dalmatia by Honoré Daumier, 1832

Following the Second Bourbon Restoration in 1815, Soult went into exile in Germany, but in 1819 he was recalled and in 1820 again made a Marshal of France. He once more tried to show himself as a fervent royalist and was made a peer in 1827. After the revolution of 1830 he declared himself a partisan of Louis Philippe, who welcomed his support and revived for him the title of Marshal General of France, previously held only by Turenne, Claude Louis Hector de Villars, and Maurice de Saxe.

Soult served as Minister of War from 1830 to 1834, as President of the Council of Ministers (or Prime Minister) from 1832 to 1834, as ambassador extraordinary to London for the coronation of Queen Victoria in 1838 – where his former enemy, the Duke of Wellington, reputedly caught him by the arm and exclaimed "I have you at last!" —, again as Prime Minister from 1839 to 1840 and 1840 to 1847, and again as Minister of War from 1840 to 1844. In 1848, when Louis Philippe was overthrown, Soult once again declared himself a republican. He died at his castle of Soult-Berg, near his birthplace.

Soult published a memoir justifying his adherence to Napoleon during the Hundred Days, and his notes and journals were arranged by his son Napoleon Hector, who published the first part (Mémoires du maréchal-général Soult) in 1854. Le Noble's Mémoires sur les operations des Français en Galicie are supposed to have been written from Soult's papers.

Although often found wanting tactically – even some of his own aides questioned his inability to amend a plan to take into account altered circumstances on the battlefield – Soult's performance in the closing months of the Peninsular War is often regarded as proof of his fine talents as a general. Repeatedly defeated in these campaigns by the Allies under Wellington, it was the case that many of his soldiers were raw conscripts while the Allies could count greater numbers of veterans among their ranks. Soult was a skillful military strategist. An example was his drive to cut off Wellington's British army from Portugal after Talavera, which nearly succeeded. Though repeatedly defeated by Wellington in 1813–1814, he conducted a clever defence against him.

Soult's armies were usually well readied before going into battle. After Vitoria, he reorganized the demoralized French forces of Joseph Bonaparte into a formidable army in a remarkably short time. An exception to this good logistical record was launching the Battle of the Pyrenees offensive when his soldiers only had four days' rations.

Tactically, Soult planned his battles well, but often left too much to his subordinates. Wellington said that "Soult never seemed to know how to handle troops after a battle had begun".[7] An example of this was at the Battle of Albuera, where he brilliantly turned Beresford's flank to open the battle, yet when he found himself facing unexpected opposition from British and Spanish troops, he allowed his generals to adopt a clumsy attack formation and was beaten.[8] Another example of his strengths and weaknesses can be seen at the Battle of the Nive. Soult recognized Wellington's strategic dilemma and took advantage by launching surprise attacks on both wings of the Anglo-Allied Army. But French tactical execution was poor and the British general managed to fend off Soult's blows. Sloppy staff work marred his tenure as Napoleon's chief of staff in the Waterloo campaign.