Fra' Jean Parisot de Valette[lower-alpha 1], (4 February 1495[?], Parisot, Rouergue – 21 August 1568, Malta) was a French nobleman and 49th Grand Master of the Order of Malta, from 21 August 1557 to his death in 1568. As a Knight Hospitaller, joining the order in the Langue de Provence, he fought with distinction against the Turks at Rhodes. As Grand Master, Valette became the Order's hero and most illustrious leader, commanding the resistance against the Ottomans at the Great Siege of Malta in 1565, sometimes regarded as one of the greatest sieges of all time.[1] 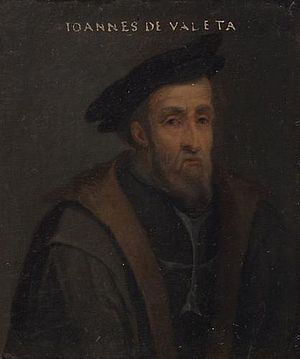 He was born into the noble Valette family in Quercy, South-western France, which had been an important family in France for many generations, various members having participated in the Crusades. Jean Parisot's grandfather, Bernard de Valette, was a Knight and King's Orderly, and his father Guillot was a Chevalier de France. Jean Parisot was a distant cousin (through their mutual ancestor Almaric, Seigneur de Parisot) of Jean Louis de Nogaret de La Valette, first Duke of Épernon.[2]

Although his birth year is usually given as 1494, both chroniclers of the Great Siege of Malta, Francisco Balbi di Correggio and Hipolito Sans, say he was 67 at the time, thereby implying that he was born in 1498. In his history of the Order of St. John, the 18th-century historian Abbe Vertot (whose history is largely based on - but often confuses - the earlier one of Giacomo Bosio) indicates that Valette was indeed the same age as both Suleiman I and Lala Kara Mustafa Pasha (the commander of the Ottoman land forces), which would mean that he was actually 70 years old at the time of the siege.

Little else is known about de Valette's early life.

Early career and rise within the Order 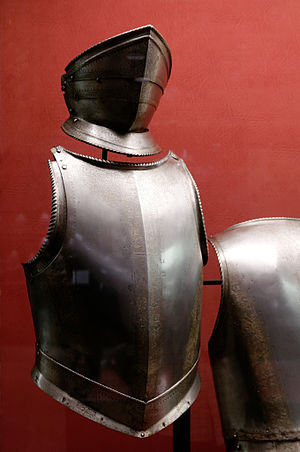 De Valette joined the Order when he was 20 years old in around 1514, and he never returned to France or his family estates from that day on.[2] Jean de Valette was present during the Great Siege of Rhodes in 1522, and accompanied Grand Master Philippe Villiers de L'Isle-Adam, after the Order's expulsion from Rhodes by the Ottoman Turks under Sultan Suleiman the Magnificent.

After the loss of Rhodes, the Order was granted the Maltese Islands and Tripoli by Emperor Charles V. In 1537 Valette became Governor of Tripoli, where he tried to restore order within the vulnerable city.[2] In 1538 he was imprisoned in the Gozo prison for 4 months after attacking a man.[3] In 1541 Valette was involved in a naval battle against Abd-ur-Rahman Kust Aly, in which he was wounded and his galley, the San Giovanni, was captured. De Valette was taken as a galley slave for a year by Barbary pirates under the command of Turgut Reis but was later freed during an exchange of prisoners.[4]

In 1554 he was elected Captain General of the Order's galleys. This was a great honour to the Langue of Provence, as throughout most of the Order's history, the position of Grand Admiral was usually held by a Knight Grand Cross of the Italian Langue. In that capacity he won a name that stood conspicuous in that age of great sea captains, and was held in the same regard as the Chevalier Mathurin Romegas - one of the greatest Christian maritime commanders of the age. In fact both sides had extremely talented sailors. If Valette, Romegas and Juan de Austria could be considered the best commanders that the Christian forces could bring to the sea, the forces of Islam were able to call on the equally outstanding maritime and leadership skills of admirals such as Barbarossa and Dragut. De Valette was described by Abbe de Branthome as being a "very handsome man, speaking several languages fluently including Italian, Spanish, Greek, Arabic and Turkish."[5] 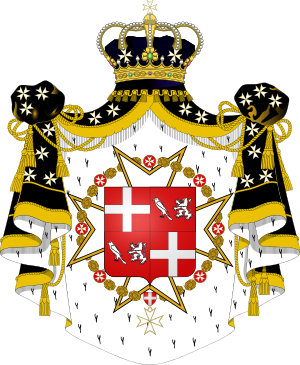 Coat of arms of de Valette as Grandmaster

In 1557, upon the death of Grand Master Claude de la Sengle, the Knights, mindful of the attack that was sure to come, elected Valette to be Grand Master. In 1560 he formed an alliance with the Habsburg Empire to reconquer Tripoli, but the expedition resulted in a Christian defeat at the Battle of Djerba. Despite this the Order's galleys were able to rescue several other Christian vessels, and later on in his reign, De Valette greatly strengthened the Order's navy.[2]

He fought and successfully repulsed the Turks at the Great Siege of Malta in 1565, in which the vastly outnumbered Christians held out for over 3 months against an Ottoman force containing no less than 30,000 soldiers, including the Janissaries, as well as the Sultan's fleet of some 193 ships. The battle saw the fall of Fort St. Elmo after about a month of fierce fighting, but the Order managed to hold out in Birgu and Senglea until a relief force arrived and the Ottomans were defeated. As a result of the Order's victory he gained much prestige in Europe, but he declined the offer of a cardinal's hat in order to maintain independence from the papacy. This has been attributed to his sense of modesty and his humility as a warrior monk.

Building of Valletta and death

After the great siege, he commissioned the construction of the new city of Valletta in 1566, laying the first stone with his own hands. This took place on the slopes of Mount Sciberras, where the flower of the Turkish army had died whilst trying to storm Fort Saint Elmo, which the Turks thought would fall within three or four days, but which, due to the bravery of the defenders, held out for 30 days.

The city named after its founder - Humilissima Civitas Vallettae - became known as the most aristocratic and exclusive fortress in Europe - a city most often referred to as "Superbissima" - the "Most Proud". Valletta remains the Maltese capital to this day.

De Valette suffered a stroke while praying in a chapel and died soon after on 21 August 1568, exactly eleven years after he became Grandmaster. De Valette never saw the completed city of Valletta. His tomb (in the form of a sarcophagus) can be found in the Crypt of the Conventual Church of the Order (now St. John's Co-Cathedral), situated within the walls of Valletta.[5] The inscription on his tomb, which was composed by his Latin Secretary, Sir Oliver Starkey, the last Knight of the English Langue at the time of the Great Siege, states in Latin:

Here lies La Valette.
Worthy of eternal honour,
He who was once the scourge of Africa and Asia,
And the shield of Europe,
Whence he expelled the barbarians by his Holy Arms,
Is the first to be buried in this beloved city,
Whose founder he was.

De Valette has been referred to as one who never broke his vows, but it has been claimed that he had a mistress while in Rhodes called Catherine nicknamed Greque (Greek), and that he had an illegitimate son from her who was called Barthélemy de Valette. Documentary evidence has been found by Bonello that proves Barthélemy was legitimatized in 1568 by a decree by the King of France.[6]

Claims have also been put forth that de Valette had at least another daughter, Isabella Guasconi, after a presumed affair with the wife of a Rhodiot nobleman of Florentine descent. Isabella later married a Florentine gentleman Stefano Buonaccorsi, but he murdered her on 31 July 1568, some time after their marriage. After the murder Buonaccorsi escaped the islands with Isabella's wealth and was never heard from again.[7] 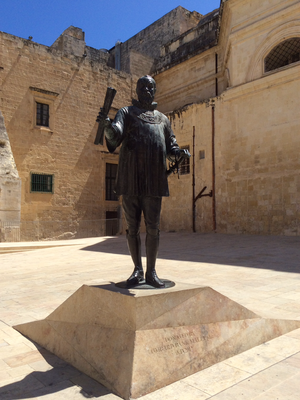 De Valette is well known for being the Grandmaster who won the Great Siege and founded Valletta. A street in the town of Naxxar as well as the flagship of Virtu Ferries MV Jean De La Valette are both named after him. De Valette was also featured on Maltese stamps, coins, banknotes and telecards a number of times.

In 2012, a square was inaugurated in Valletta named Pjazza Jean De Valette which also features a statue of the Grandmaster. The statue is 2.5m high and was cast in bronze by the local sculptor Joseph Chetcuti. In the statue De Valette is shown armour and holding Valletta's plan in one hand and a sword in the other.[8] 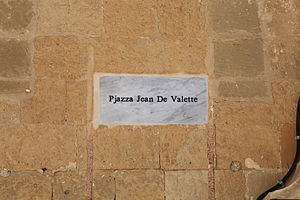 For many years, the widely accepted version of the Grandmaster's surname was de La Valette. However, during the unveiling of the statue at Pjazza Jean De Valette in November 2012, judge and historian Giovanni Bonello stated that the Grandmaster always signed his name as de Valette without the la. A week later, Désireé von la Valette Saint Georges, a descendant of the Grandmaster, stated that the family name was de la Valette not de Valette and since then, a dispute has started as to what his name actually was.[9]

Members of the various branches of the Valette family actually used both versions at the time, but the Grandmaster himself never used the La.[10][11] In fact, all 138 coins and 19 medals minted by the Order during De Valette's reign show the names de Valette, de Valetta or just Valette. Bonello additionally stated that the La possibly originated since the city of Valletta was commonly called La Valletta, so people started including the La and sometimes the double l in the Grandmaster's name.[12]

The name de Valette is now used in Malta, although many still refer to him as de La Valette due to the collective memory.[13] The Order's successor, the Sovereign Military Order of Malta, call the Grandmaster Fra’ Jean de la Vallette-Parisot.[14]

Due to his key role in holding Malta during the siege of 1565, de Valette has appeared as a main and supporting character in several works of literature: