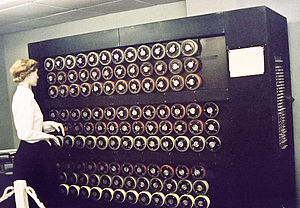 A mockup of a bombe at Bletchley Park, as operated by Jean Valentine during World War II.

Jean Valentine (born 1924, Scotland) was an operator of the bombe decryption device in Hut 11 at Bletchley Park in England, designed by Alan Turing and others during World War II.[1] She was a member of the "Wrens" (Women's Royal Naval Service, WRNS).[2] She was one of a number of women who worked at Bletchley Park.[3] During this time, she lived in Steeple Claydon in Buckinghamshire. She started working on 15 shillings (75 pence) a week. Along with her co-workers, she remained quiet about her war work until the mid-1970s.

On 24 June 2012, Jean Valentine spoke on her wartime experiences at Bletchley Park and elsewhere as part of a Turing's Worlds event to celebrate the centenary of the birth of Alan Turing, organized by the Department for Continuing Education's Rewley House at Oxford University in cooperation with the British Society for the History of Mathematics (BSHM).[14]