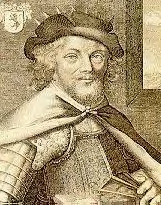 Jean de Béthencourt (French pronunciation: ​[ʒɑ̃ də betɑ̃kuːʁ]) (1362–1425) was a French explorer who in 1402 led an expedition to the Canary Islands, landing first on the north side of Lanzarote. From there he conquered for Castile the islands of Fuerteventura (1405) and Hierro, ousting their local chieftains (majos and bimbaches, ancient peoples). Béthencourt received the title King of the Canary Islands but he recognized King Henry III of Castile, who had provided aid during the conquest, as his overlord.

The Canary Islands were apparently known to the Carthaginians of Cadiz. The Roman writer Pliny the Elder called them "the Fortunate Islands". Genoese navigator Lancelotto Malocello is credited with the rediscovery of the Canary Islands in 1312.[1] In 1339, Majorcan Angelino Dulcert drew the first map of the Canaries, labeling one of the islands "Lanzarote".[2]

Jean de Béthencourt, Baron of Saint-Martin-le-Gaillard, was born in Grainville-la-Teinturière, province of Normandy, the son of Jean III Bethencourt and Marie de Bracquemont. During his conflicts with the King of Navarre, King Charles V ordered demolished all fortresses of the region belonging to supporters of Navarre, or those whose owners were unable to ensure their defense. Béthencourt's father was killed in May 1364 at the Battle of Cocherel, serving under Bertrand du Guesclin,[2] and Jean was still a minor. Grainville was demolished in 1365. In 1377, the fifteen year old Bethencourt entered the service of Louis I, Duke of Anjou, reaching the position of squire. Between 1387 and 1391 he held the honorary post of chancellor of Louis de Valois, Duke of Touraine (later Duke of Orleans). In 1387, King Charles VI of France gave permission to rebuild the castle in Grainville, which had been order demolished by Charles V.

As lord of Grainville, Bethencourt held seven parishes and rights over all the goods that crossed his land. He held Grainville as a vassal of the Count of Logueville, Olivier Du Guesclin, son of Bertrand du Guesclin. He later held it under Henry V of England who had taken control as a result of his expeditions in France. Around this time, taking advantage of the instability of relations between England and France, it is likely that Béthencourt engaged in piracy against both sides. In 1392 he married in Paris Jeanne de Fayel, the daughter of Guillaume de Fayel and Marguerite de Chatillon.

In 1390 he accompanied the Duke of Touraine on an expedition organized by Genoese merchants to address Barbary piracy.[3] The proposal by the doge was presented as a crusade. As such it would give prestige to its participants, a moratorium on their debts, immunity from lawsuits, and papal indulgence.[4] The French force, consisting of 1,500 knights under the leadership of Louis II, Duke of Bourbon lay siege to of Al-Mahdiya in Tunis.

The French were unfamiliar with the terrain, lacked heavy siege equipment, underestimated, and became embroiled in internal quarrels.[4] The Berbers realized that they could not overcome the heavier armed invaders. Tired of the oppressive heat and concerned about the upcoming winter, the French agreed to a treaty negotiated by the Genoese.

It is likely that Béthencourt heard stories regarding the Canary Islands from the Genoese, and of the presence of orchil, a lichen used to make a rare and expensive dye.[2]Here too, he again met up with Gadifer de la Salle, whom he had known previously during service under the Duke of Orleans, and who would accompany him to the Canaries.

Expedition to the Canary Islands

At that time the Canary Islands were mainly frequented by merchants or Spanish pirates. To finance his expedition he sold his house in Paris valued at 200 gold francs and some other small pieces of property in December 1401.[5] His uncle, Robert de Bracquemont, French ambassador to Castile, loaned him 7,000 pounds against a mortgage of Bethencourt's estate.[5] According to Moreri, King Henry III of Castile entrusted the conquest of the Canaries to Braquemont who gave the commission to Béthencourt.[2] 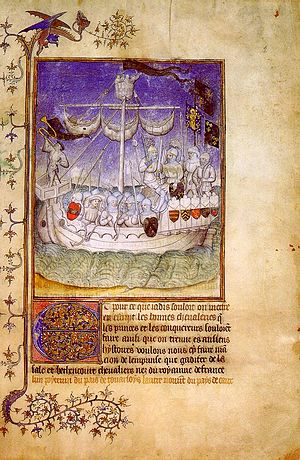 One of the ships departing for the 1402 Norman expedition (from "Le Canarien").

Béthencourt set sail from La Rochelle on 1 May 1402 with 280 men, mostly Gascon and Norman adventurers, including two Franciscan priests (Pierre Bontier and Jean le Verrier[5] who narrated the expedition in Le Canarien) and two Guanches who had been captured in an earlier Castilian expedition and were already baptised.

After passing Cape Finisterre, they put in to Cadiz, where he found some of his sailors so frightened that they refused to continue the voyage. Of the eighty crew with which he set out, Béthencourt sailed with fifty-three. He arrived at Lanzarote, the northernmost inhabited island. While Gadifer de la Salle explored the archipelago, Béthencourt left for Cádiz, where he acquired reinforcements at the Castilian court. At this time a power struggle had broken out on the island between Gadifer and Berthin de Berneval, another officer. Berthin spread dissention between the Normans of Béthencourt and the Gascons of Gadifer. Local leaders were drawn into the conflict and scores died in the first months of Béthencourt's absence. During this time, Gadifer managed to conquer Fuerteventura and to explore other islands. It was only with the return of Béthencourt in 1404 that peace was restored to the troubled island. De la Salle and Béthencourt founded the city of Betancuria (as capital of the island of Fuerteventura) in 1404.

Years later Bethencourt was defeated by the aboriginals of the island of Gran Canaria (canarios) in the battle of Arguineguin at south of the island, getting the title of Great. He died in 1422, and was buried in the church of Grainville-la-Teinturiere.[6]

Some of his descendants had great power and fortune in the islands. Including Ginés de Cabrera Béthencourt, famous for building the Casa de Los Coroneles (House Of The Colonels) in the municipal area that would nowadays be known as La Oliva.

To this day, Betancourt and other forms of his surname are quite frequent among Canary Islanders and people of Canary Islander descent, in spite of his death without issue, thanks to the practice of baptising the natives with his surname and to the offspring of his nephew Maciot de Béthencourt who succeeded him as lord of the islands.