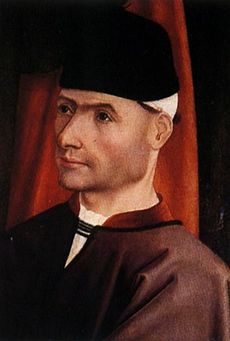 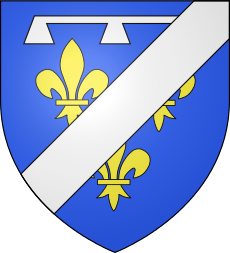 Coat of arms of the Counts of Longueville

Jean de Dunois (23 November 1402 – 24 November 1468), also called John of Orléans and Jean de Duno (Jean d'Orléans), was the illegitimate son of Louis I, Duke of Orléans, by Mariette d'Enghien. His nickname, the "Bastard of Orléans" (bâtard d'Orléans), was a term of respect, since it acknowledged him as a first cousin to the king and acting head of a cadet branch of the royal family during his half-brother's captivity. In 1439 he received the county of Dunois from his half-brother, Charles, Duke of Orléans, and later king Charles VII made him count of Longueville.

Jean's father died in 1407. His legitimate half-brother, Charles, Duke of Orléans, became an English prisoner at the Battle of Agincourt and remained so for several decades. This left him the only free adult male of the house of Orléans. He was Knight of the Order of the Porcupine.[1]

Jean joined the civil war in France in the time of Charles VI on the side of the Armagnacs, and was captured by the Burgundians in 1418. Released in 1420, he entered the service of the Dauphin Charles, fighting in the Hundred Years' War against English forces. The future count of Dunois led the French defenses at the siege of Orléans. Together with Joan of Arc he relieved the siege. He joined her on the campaigns of 1429 and remained active after her death.

Jean took part in the coronation of Charles VII and in 1436 he aided in the capture of Paris. He was prominent in the conquest of Guienne and Normandy in the final years of the Hundred Years War. He participated in the Praguerie against Charles VII and was a leader of the League of the Public Weal against King Louis XI in 1465, but each time he regained favor at court.

Dunois appears as a character in the following plays:

He also appears in the following adaptations of Schiller's play:

He also appears in the Microsoft Games Age of Empires Age of Kings, Joan of Arc campaign as a gunner during Siege of Paris Scenario. He was also portrayed in the Luc Besson film The Messenger: The Story of Joan of Arc.