Born at Mouilleron-en-Pareds (Vendée), in the same village of World War I leader Georges Clemenceau, to an aristocratic family.[1]

He graduated from officer school in 1911 (ranked 5th in his class in Saint-Cyr).

De Lattre fought in World War I and was wounded twice. He was made a knight of Legion of Honour in December 1914.

De Lattre specialized in cavalry and was made head of the French War College in 1935. After World War I, he served as an officer in the French headquarters during the Rif War.

He entered General Weygand's headquarters in 1932. Weygand had the choice between de Lattre and de Gaulle and chose de Lattre because of his superior rank and honors. De Lattre then served in the headquarters of an infantry regiment at Metz.

When war was declared in 1939, de Lattre commanded the French 14th Infantry Division until the armistice with the Axis troops. He won a minor battle in Rethel where a German officer said that the French resistance was similar to the Battle of Verdun.

He remained on active duty, commanding Vichy French forces in Tunisia, but was reassigned on 1 January 1942 after a dispute with his superior Alphonse Juin.[2] Returning to France de Lattre took charge of the 16th Division, based in Montpellier. Following the Allied landings in French North Africa on 8 November 1942, Germany occupied southern France and disbanded the Vichy Army. As part of the occupation, de Lattre was arrested and imprisoned for several months, but he succeeded in escaping to London in September 1943 and joined the Free French. From there he took command of the newly formed French Army B in summer 1944.

Army B was then joined with the US Seventh Army, commanded by Alexander M. Patch, to form the Southern Group of Armies. Also known as the "Sixth United States Army Group", it was set up to organize the invasion of Southern France in Operation Dragoon. Army B landed in Provence, southern France on 16 August 1944, and began driving the Germans north. On 25 September 1944 it was redesignated the "French First Army". It crossed the Vosges after heavy fighting, then Belfort, and halted. Doing so allowed the Germans to form the Colmar Pocket. During December 1944, the attempts to take Colmar were unsuccessful. The First Army was able to collapse the pocket in January and February 1945 after the successful defence of Strasbourg, which was held on the north by American troops and the French 3rd DIA and on the south by the French.

Under General de Gaulle's encouragement those French Resistance members who wished to continue fighting were incorporated into the French First Army by General de Lattre. Once France had been liberated, as part of the Alliance, his army crossed the Rhine and invaded Germany. There the First Army, now numbering more than 320,000 soldiers, took Karlsruhe, Ulm and Stuttgart before crossing the Danube and arriving in Austria. De Lattre represented France at the German unconditional surrender in Berlin on 8 May 1945. 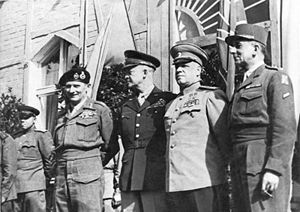 After World War II, he first became chief of staff of the NATO ground forces in Europe. He was under the orders of Field Marshal Montgomery, organizing numerous training exercises. He also served as a French military ambassador in South America.[where?]

From 1950 to September 1951, he commanded French troops in Indochina during the First Indochina War. De Lattre was highly regarded by both his French subordinates and Vietminh adversaries, and has been described as the "Gallic version of [United States General Douglas] MacArthur - handsome, stylish, sometimes charming, yet egocentric to the point of megalomania" and "brilliant and vain" and "flamboyant".[3] After de Lattre's arrival in Vietnam, Vietminh General Giap proclaimed that now his army would face "an adversary worthy of its steel".[4] De Lattre's arrival raised the morale of French troops significantly at that time and he inspired his forces to inflict heavy defeats on the Vietminh.[5] He won three major victories at Vinh Yen, Mao khé and Yen Cu Ha and defended successfully the north of the country against the Viet Minh.

At the Battle of Vinh Yen in January 1951, he defeated 2 Vietminh divisions (totaling 20,000 men) under General Giap by personally taking charge of the outnumbered French forces, flying in reinforcements, and mustering every available aircraft to bomb the massive Vietminh formations; Giap retreated after 3 fierce days of combat with approximately 6,000 dead and 8,000 wounded.[6] De Lattre had anticipated Giap's attacks and had reinforced French defenses with hundreds of cement blockhouses and new airfields.[6]

In March 1951, at the Battle of Mao Khe near the port of Haiphong, de Lattre again defeated Giap. This time, Giap underestimated the de Lattre's army's ability to deploy naval guns and move reinforcements aboard assault boats on deep estuaries and canals.[7]

However, de Lattre's only son, Bernard de Lattre de Tassigny, was killed in action during the war at the Battle for Nam Dinh in late May 1951, while obeying the elder de Lattre's orders to stubbornly hold that town at all costs against 3 Vietminh divisions.[8] This approximately three-week battle was a victory that halted Giap's initiative in the Red River Delta.[9]

On September 20, 1951, de Lattre spoke at the United States Pentagon to request American aid, warning of the danger of the spread of communism throughout Southeast Asia if northern Vietnam fell completely to the Vietminh forces.[9] However, the United States could only partially help because it was committed to the Korean War at that time. The United States did send de Lattre a number of transport planes, trucks, and other equipment - a "significant contribution", but "scarcely enough to turn the tide for France" in Vietnam.[9]

In 1951, illness forced de Lattre de Tassigny to return to Paris where he later died of cancer; in 1952, he was posthumously made Maréchal de France. After his return to France, his successors Raoul Salan and Henri Navarre did not enjoy the same level of success as de Lattre did.

Jean de Lattre de Tassigny was buried in a state funeral lasting five days, in what Life magazine described as the "biggest military funeral France had seen since the death of Marshal Foch in 1929".[10] The Marshal's body was conveyed through the streets of Paris in a series of funeral processions, with the coffin lying in state at four separate locations: his home, the chapel at Les Invalides, the Arc de Triomphe and before Notre Dame. Those marching in the funeral processions, following the gun carriage on which the tricolor-covered coffin was carried, included members of the French cabinet, judges, bishops, and Western military leaders. The pallbearers included other Allied generals of World War II, such as Bernard Montgomery and Dwight D. Eisenhower. The route included the Rue de Rivoli and the Champs-Élysées, and the processions went from the Arc de Triomphe to Notre Dame, and then from Notre Dame to Les Invalides. The stage of the journey from the Arc de Triomphe to Notre Dame took place in the evening, and cavalrymen from the Garde Républicaine flanked the coffin on horseback bearing flaming torches. Walking behind the soldiers marching in the funeral processions was the lone figure of the Marshal's widow, Simonne de Lattre de Tassigny, dressed in black and praying as she walked. Thousands of people lined the funeral route, forming crowds standing ten-deep. The pageantry included the tolling of bells, and flags being flown at half-mast. The final stage of the funeral was a journey of 250 miles to the Marshal's birthplace of Mouilleron-en-Pareds in western France. In attendance there was the Marshal's 97-year-old father, Roger de Lattre. Aged and blind, and the last of the de Lattres, he ran his hands over the ceremonial accoutrements on the coffin, which included the posthumously awarded marshal's baton and his son's kepi. Then the coffin was lowered into the ground and the Marshal was laid to rest beside his only son, Bernard, who had been killed fighting under his father's command in Indochina some eight months previously.[10]

De Lattre was awarded the following awards and decorations:[11]

Numerous memorials have been erected to the memory of Jean de Lattre. An annual military service, involving serving soldiers, veteran associations, and ceremonial carriage of the Marshal's baton, takes place at the graves of the de Lattre family in Jean de Lattre's birthplace of Mouilleron-en-Pareds.[13]