Marie-Jeanne Phlippon Roland, better known simply as Madame Roland and born Marie-Jeanne Phlippon, also known as Jeanne Manon Roland, (17 March 1754 – 8 November 1793), was, together with her husband Jean-Marie Roland de la Platière, a supporter of the French Revolution and influential member of the Girondist faction. She fell out of favour during the Reign of Terror and died on the guillotine.

Madame Roland, born Marie-Jeanne Phlippon, the sole surviving child of eight pregnancies, was born to Gratien Phlippon and Madame Phlippon in March 1754. From her early years she was a successful, enthusiastic, and talented student. In her youth she studied literature, music and drawing. From the beginning she was strong willed and frequently challenged her father and instructors as she progressed through an advanced, well-rounded education.

Enthusiastically supporting her education, Jeanne's parents enrolled her in the convent school of the Sisterhood of the Congregation in Paris - for one year only. She was enthusiastically religious, leading John Abbott to state "God thus became in Jane's mind a vision of poetic beauty."[1] Following her convent school education, she pursued her education independently, Abbott relating that "Heraldry and books of romance, lives of the saints and fairy legends, biography, travels, history, political philosophy, poetry, and treatises upon morals, were all read and meditated upon by this young child."[2] Several literary figures influenced Roland's philosophy, including Voltaire, Montesquieu, Plutarch, and others. Most significantly, Rousseau's literature strongly influenced Roland's understanding of feminine virtue and political philosophy, and she came to understand a woman's genius as residing in "a pleasurable loss of self-control."[3]

Manon Phlippon (as her close friends and relatives called her) also, as she traveled, developed an increasing awareness of the outside world. In 1774, on a trip to Versailles, some of her most famous letters were sent to her friend Sophie, wherein she first begins to display an interest in politics, describing the perfect government as one which contained "enlightened and well-meaning ministers, a young prince docile to their council who wants to do good, a lovable and well doing queen, an easy court, pleasant and decent, an honorable legislative body, a charming people who wants nothing but the power to love its master...".[citation needed] Already, Manon was disregarding the idea of an absolute monarchy by placing the authority and importance of government ministers before the crown.

In the winter of 1780, Manon Phlippon married the philosopher Jean-Marie Roland de la Platière. 20 years her senior, M. Roland was politically ambitious, and following their marriage, Madame Roland's love for literature and her husband's political aspirations formed a new foundation for her intellectual development. She collaborated on a number of M. Roland's works: the Dictionnaire des Manufactures, Arts et Métiers, and a contribution to Panchoucke's Encyclopedie Methodique, in particular. Her most significant influence flowed through her husband's political writings. Nevertheless, attempting to conform to Rousseau's model of femininity, she also carefully restricted herself "well within the limits of a woman's domestic function."[4] Thus, with him and through him, she proved both powerful and influential in the era of the French Revolution.

In 1784, she obtained a promotion for her husband which transferred him to Lyon, where she began building her network of friends and associates. In Lyon, the Rolands began to express their political support for the revolution through letters to the journal Patriote Français. Their voice was noticed and in November 1790, Jean-Marie was elected to represent Lyon in Paris, negotiating a loan to reduce the debt of Lyon. When the couple moved from Lyon to Paris in 1791, she began to take an even more active role. Her salon at the Hotel Britannique in Paris became the rendezvous of Brissot, Pétion, Robespierre and other leaders of the popular movement. An especially esteemed guest was Buzot, whom she loved with platonic enthusiasm. These leaders of the Girondist faction of the Jacobin Club met to discuss the rights of citizens and strategies to transform the French from subjects of the Monarchy into citizens of a constitutional republic.

In person, Madame Roland is said to have been attractive but not beautiful; her ideas were clear and far-reaching, her manner calm, and her power of observation extremely acute. Madame Roland’s ability to weave social networks fed the Rolands' growing popularity; an invitation from Madame Roland would signify acknowledged importance to the developing French government. It was through Manon that one gained access to the inner circle of the growing Gironde. Inevitably, her activity placed her in the centre of political aspirations where she swayed a company of the most talented men of progress.

As noted above, Madame Roland began her movement toward political involvement slowly, initially acting as her husband’s secretary, and later developing into a far more influential member of revolutionary politics. As time went on she realised that she could tweak a number of her husband’s letters and still sign them in his name. M. Roland’s rise in politics and the Girondin faction subsequently improved Madame Roland’s influence. In maintenance of her feminist beliefs she never spoke during formal meetings. Instead she listened intently at her desk, taking notes, thus educating herself on political matters.[5] Independently, M. Roland performed sufficiently in his duties as a minister, possessing reasonable knowledge, activity, and integrity. In combination with Madame Roland, he shone due to his ability to articulate writings infused with spirit, gentleness, authoritative reason, and seducing sentiment.[6] Consequently, whenever M. Roland spoke, it was generally known that he was speaking also for her. Girondin policies reflected her sentiments. This political influence continued until the downfall of the Girondin movement, related to Madame Roland's notoriety provoking strong opposition from the Montagnards and celebrated figures such as Robespierre, Danton, and Marat.

As a result of ideological differences, Madame Roland and her husband defected from the Jacobins in early 1792 and, with Jacques-Pierre Brissot, formed the moderate Girondin party. The Girondists desire to bring liberty to the people, whilst simultaneously implementing control coincided with Madame Roland’s political beliefs, thus satisfying her ‘appetite’: “All her tastes were with the ancient nobility and their defenders. All her principles were with the people.”[7] Succeeding the surrender of King Louis XVI, the Girondists installed M. Roland as Minister of the Interior. At the time, this position was particularly dangerous, creating an alternate representation of the French monarchy. This 'promotion' added to the spirit of Madame Roland, “whose all-absorbing passion it now was to elevate her husband to the highest summits of greatness, was gratified in view of the honor and agitated in view of the peril.”[8] During this period, she authored much of his official correspondence, including the letter to the King of 21 June 1792, which urged the King to publicly pledge his loyalty and cooperation to the new republic, or suffer the consequences of escalating civil unrest. Madame Roland’s sharply worded passion cost her husband his ministry, but satisfied Madame Roland’s pride and passion. This letter to the King could be considered the peak of her political influence. After Monsieur Roland made a stand against the worst excesses of the Revolution, however, the couple became unpopular. Once, Madame Roland appeared personally in the Assembly to repel the falsehoods of an accuser, and her ease and dignity evoked enthusiasm and compelled acquittal. Her drive, focus, and radiant intelligence made her the equal in accomplishments of any contemporary male politician.

Nevertheless, the accusations mounted. On the morning of 1 June 1793, she, along with other Girondins, was arrested for treason and, as a woman who had betrayed her gender, for her political activism. She was thrown into the prison of the Abbaye. Her husband escaped to Rouen with her help. Released for an hour from the Abbaye, she was again arrested and placed in Sainte-Pelagie, and finally transferred to the Conciergerie. In prison, she was respected by the guards, and was allowed the privilege of writing materials and occasional visits from devoted friends. There, she wrote her Appel à l'impartiale postérité, memoirs which display a strange alternation between self-praise and love of country, the trivial and the sublime. She was tried on trumped-up charges of harbouring royalist sympathies, but it was plain that her death was part of Robespierre's purge of the Girondist opposition. 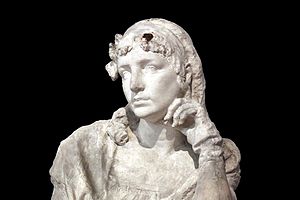 In prison Roland struggled with her concept of a woman’s place in the nation of France after having been forced to lurk in the shadows to gain her own influence over the nation. Though she had earlier stated that she would "rather chew off (her own) fingers than become a writer,"[citation needed] Madame Roland began writing her memoirs during her stay in prison, completing them in five months, with sections smuggled from the prison by her frequent guests. In her memoirs, she reflected upon her studies, passions, and political events. She had climbed the political scale by editing and modifying her husband’s platform but she established her historical significance through her recorded memoirs.[citation needed]

She proved women to be valuable active partners to political success. After Madame Roland helped her husband escape Paris, she accepted her fate of death on the guillotine as the only way to clear her name and reputation. Refusing to compromise her principles and remaining true to the ideals of Rousseau, Voltaire, and Plutarch, she died as a citizen of the Republic, not a subject of the monarchy. Her memoirs were published in 1795.

On 8 November 1793, she was conveyed to the guillotine. Before placing her head on the block, she bowed before the clay statue of Liberty in the Place de la Révolution, uttering the famous remark for which she is remembered:

Her corpse was disposed of in the Madeleine Cemetery. Two days after her execution, her husband, Jean-Marie Roland, committed suicide on a country lane outside Rouen.

In her autobiography, Madame Roland reshapes her historical image by stressing the popular connection between sacrifice and female virtue. Her Mémoires de Madame Roland (1795) were written from prison where she was held as a Girondin sympathizer. It covers her work for the Girondins while her husband Jean-Marie Roland was Interior Minister. The book echoes such popular novels as Rousseau's Julie or the New Héloise by linking her feminine virtue and motherhood to her sacrifice in a cycle of suffering and consolation. Roland says her mother's death was the impetus for her "odyssey from virtuous daughter to revolutionary heroine" as it introduced her to death and sacrifice - with the ultimate sacrifice of her own life for her political beliefs.[10]