From Infogalactic: the planetary knowledge core
Jump to: navigation, search
For other people named Jeff Daniels, see Jeff Daniels (disambiguation).
Not to be confused with Jeffrey Daniel.

Jeffrey Warren "Jeff" Daniels (born February 19, 1955) is an American actor, musician, and playwright. He founded a nonprofit theater company, the Purple Rose Theatre Company, in his home state of Michigan. He has performed in a number of stage productions, both on and off Broadway, and has been nominated for the Tony Award as Best Actor for the Broadway play God of Carnage (2009), along with his other three castmates.

His film debut was 1981's Ragtime, and his most recent films are Steve Jobs and The Martian, in 2015. For his work, he has received four Golden Globe Award nominations, including as Best Performance by an Actor in a Motion Picture—Comedy/Musical for Woody Allen's The Purple Rose of Cairo (1985) (hence the name of his theater company). He has also received nominations by the Screen Actors Guild, Satellite Awards, and several others for his work in The Squid and the Whale (London Critics Circle Awards, Independent Spirit Awards, and Gotham Awards). He played Debra Winger's husband in the 1983 Oscar-winning film Terms of Endearment. Recently, he starred as Will McAvoy in Aaron Sorkin's HBO television series The Newsroom, for which he won the Emmy Award for Outstanding Lead Actor in a Drama Series in 2013.

Daniels was born in Athens, Georgia, the son of Marjorie J. (née Ferguson) and Robert Lee "Bob" Daniels.[1][2] He lived in Georgia for six weeks,[3] and grew up in Chelsea, Michigan; his father owned a lumber yard in Chelsea, until his death in 2012, and had once served as the city's mayor. Daniels was raised Methodist.[4] He attended Central Michigan University and participated in the school's theater program. In the summer of 1976, Daniels attended the Eastern Michigan University drama school to participate in a special Bicentennial Repertory program, where he performed in The Hot l Baltimore and three other plays performed in repertoire. Marshall W. Mason was the guest director at EMU and he invited Jeff to come to New York to work at the Circle Repertory Theatre, where he performed in Fifth of July by Lanford Wilson in the 1977–78 season. He also performed in New York in The Shortchanged Review (1979) at Second Stage Theatre.[5] It was the first show of the inaugural season for Second Stage Theatre.

Daniels has starred in a number of New York productions, on and off Broadway. On Broadway, he has appeared in Lanford Wilson's Redwood Curtain, A. R. Gurney's The Golden Age and Wilson's Fifth of July, for which he won a Drama Desk Award for Best Supporting Actor. Off-Broadway, he received a Drama Desk nomination for Wilson's Lemon Sky, and an Obie Award for his performance in the Circle Repertory Company production of Johnny Got His Gun. He returned to the stage in 2009, appearing in Broadway's God of Carnage with Marcia Gay Harden, Hope Davis, and James Gandolfini.[6]

In 1991, he founded the regionally acclaimed[7] Purple Rose Theatre Company, a nonprofit stage company in his childhood and current home of Chelsea, Michigan. He is currently executive director of PRTC and has written 15 plays for them.

Daniels made his screen debut in Miloš Forman's Ragtime in 1981. His next film, the Oscar-winning Terms of Endearment, in which he played Debra Winger's husband, was his breakthrough. Daniels then garnered a Golden Globe nomination as the star of The Purple Rose Of Cairo, directed by Woody Allen. It was the latter film that inspired the name for the theater company he established. (See above.)

Daniels earned his second Golden Globe nomination for starring in Jonathan Demme's dramedy Something Wild as an unassuming businessman swept up into a wild night by a mysterious woman (Melanie Griffith). Daniels then starred in the horror–comedy (or "thrill-omedy," as it was described in the promotion) Arachnophobia in 1990. The next year Daniels starred in two films (Love Hurts and The Butcher's Wife) and hosted NBC's sketch comedy show Saturday Night Live.

Daniels' next notable role was as Colonel Joshua Chamberlain in Gettysburg. Alongside Daniels were Tom Berenger, Martin Sheen, Stephen Lang, and Sam Elliot. The two-part film proved so popular on television that the 262-minute movie garnered a theatrical release. Daniels would reprise the role of Chamberlain ten years later in the prequel film Gods and Generals, with much of the same cast except for Sheen, who was replaced by Robert Duvall.

In 1994 Daniels would have one of his most successful films commercially, starring in the Farrelly Brothers's hit Dumb and Dumber alongside Jim Carrey. It was a noted departure for Daniels, owing to his status as a dramatic actor. That same year Daniels appeared with Keanu Reeves in the action blockbuster Speed; Daniels starred as Reeves's partner on the LAPD bomb squad. Also starring Dennis Hopper and Sandra Bullock, Speed was an enormous hit, grossing over $350 million at the box office.

Daniels would then host Saturday Night Live a second time before the release of the 1996 Disney live-action remake of 101 Dalmatians. Daniels starred as the owner of a litter of dalmatians stolen by the evil Cruella De Vil (Glenn Close). The film was successful, grossing $320 million. Also in 1996 was the family hit film Fly Away Home with Daniels as the supportive single father of Anna Paquin's goose-raising preteen. Daniels then had a critical and commercial misfire with 1997's Trial and Error alongside Seinfeld's Michael Richards.

Daniels would rebound, however, with 1998's Pleasantville as diner owner Bill Johnson, who learns to act as an individual and rebel against the norm at the urging of Tobey Maguire's David. Also starring Reese Witherspoon, Joan Allen, and Don Knotts, Pleasantville was one of the best-reviewed films of the year, nominated for three Academy Awards. Daniels would then star alongside Christopher Lloyd in the critical and commercial bomb My Favorite Martian. The film, an unsuccessful re-make of the 1960s TV series, severely damaged Daniels's status as a box office star, and he would proceed to work in increasingly less mainstream starring roles.

Daniels then starred in the TV films The Crossing, Cheaters, and the direct-to-video release Chasing Sleep. At this point, in the early 2000s, Daniels began to focus more on his theater work at The Purple Rose Theatre as well as writing, starring, and directing the films Escanaba in da Moonlight and Super Suckers.

Daniels's next major film role would be in Clint Eastwood's Blood Work. The film received mixed reviews and was a commercial failure. He would rebound later that year with Stephen Daldry's Academy Award–winning The Hours, alongside Nicole Kidman, Meryl Streep, and Julianne Moore. The film was also a monetary success, grossing well over $100 million. Gods and Generals followed in 2003, as did the action film I Witness, which co-starred James Spader. Daniels then starred in Imaginary Heroes and the 2004 television film adaptation of fellow Michigander and friend Mitch Albom's bestseller The Five People You Meet in Heaven.

The year 2005 proved to be a strong year for Daniels as he garnered notice as the star of the lauded Noah Baumbach film The Squid and the Whale. Daniels received his third Golden Globe nomination for the film, about a divorcing couple and the effect the split has on their children. That year Daniels also starred in the family film adaptation of Because of Winn-Dixie. He would round out the year with a supporting role in the Oscar-nominated film Good Night and Good Luck, directed by George Clooney.

Daniels then starred as the redneck comic foil to Robin Williams's uptight business man in the vacation comedy RV, directed by Barry Sonnenfeld. He had a supporting role in the Truman Capote biopic Infamous and in two other independent films, Mama's Boy and The Lookout, for which he was nominated for a Satellite Award.

Daniels then had a starring voice-over role as the villain Zartog in animated film Space Chimps. Daniels then took back-to-back supporting roles in political thrillers: Traitor with Don Cheadle and State of Play with Russell Crowe and Rachel McAdams. Also in 2009 Daniels would appear in the indie hit Away We Go. The year 2010 would prove to be a slow year for Daniels, as he continued his theater work and had a starring role in the little-seen indie Howl alongside James Franco as Allen Ginsberg.

In 2012, Daniels became the new announcing voice for Apple with the iPhone 5 ads. In 2014, Daniels reprised his role as Harry Dunne in Dumb and Dumber To.

Daniels portrayed CEO John Sculley in the 2015 biographical drama film Steve Jobs, directed by Academy Award winner Danny Boyle, and starring Michael Fassbender in the title role. He has been cast as David for the two-part completing film of the Divergent series, titled Allegiant.[8]

Daniels has focused on recording a number of songs that he has written throughout his life, apparently marking key moments. He has kept busy with frequent gigs and six full-length albums, Jeff Daniels Live and Unplugged, Jeff Daniels Live at The Purple Rose Theater, Grandfather's Hat, Keep It Right Here, Together Again, and Days Like These. Proceeds from the album sales benefit The Purple Rose Theater.

Daniels was featured on the cover of the April–May 2011 issue of Guitar Aficionado magazine as well as the July–August 2011 issue of Making Music, where he discussed his experiences with music.

Daniels has been married to his high school sweetheart, Kathleen Rosemary Treado,[9] since 1979. They married on Friday the 13th because he wore the number 13 on his baseball uniform.

He has appeared as the TV spokesman for the Michigan Economic Development Corporation promoting Michigan's effectiveness in bringing in new companies,[vague] featured on CNBC.

Daniels was inducted into the Michigan Walk of Fame on May 25, 2006, in Lansing, Michigan, and delivered the winter commencement address at the University of Michigan on December 20, 2009, at which he was granted an Honorary Doctorate in Fine Arts.[10] 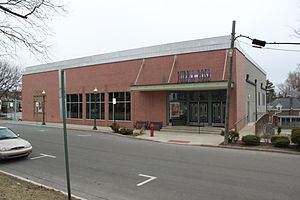 The Purple Rose Theatre Company (or PRTC) was founded by Jeff Daniels in 1991. Originally known as the Garage Theatre, 'The Rose' takes its name from Woody Allen's 1985 film The Purple Rose of Cairo starring Daniels. The theatre provides resources for training actors, playwrights and other theatre artists residing in the Midwest region and develops new plays based on life in the Great Lakes Basin, USA.

The main performance space and administrative offices occupy a building in Chelsea, Michigan once owned by Daniels' grandfather. The theatre produces four shows a year on a 3/4 thrust stage in a 168-seat house. The PRTC is a 501(c)3 not-for-profit organization and operates under a Small Professional Theatre (SPT) Agreement with the Actors' Equity Association (AEA).

The Purple Rose offers a year-long apprenticeship program for young artists entering a career in theatre. Apprentices are paid a 'modest stipend' and work as many as 60–80 hours per week gaining experience in lighting, sound, stage management, design, set construction, and administrative/box office work. The seven apprentices also maintain and clean the theatre's facilities. The program was inspired by Jeff Daniels' experience as an apprentice with the Circle Repertory Company in New York City.