Suppan was drafted out of high school (Crespi Carmelite High School) by the Boston Red Sox in the second round of the 1993 amateur draft, and rapidly ascended to the Majors making his debut at the age of 20.

Suppan was picked up by the expansion Arizona Diamondbacks in 1998. In his lone season with Arizona, Suppan was 1-7 in 13 starts with a 6.68 ERA.

In 2003, he opened the season for the Pittsburgh Pirates after signing a one year deal with them in January.[2] Through 21 starts, Suppan was 10-7 with a 3.57 ERA for the Pirates.

Suppan was dealt at the trading deadline back to the Red Sox for their playoff stretch run. Suppan didn't perform well during Boston's stretch run. He went 3-4 with a 5.57 ERA and surrendering 12 home runs.

The Cardinals signed Suppan as a free agent in 2004, and he embarked upon a career year, posting a 16–9 record and a 4.16 earned run average, with 110 strikeouts, 65 walks, and 192 hits allowed in 188 innings. Suppan helped lead the Cards to the 2004 World Series, where he started Game 3. His major base running mess up in game 3 was one of the defining moments of the World Series.

In 2005 he improved on his previous year's performance, going 16–10 with a 3.57 ERA. He started Game 4 of the National League Championship series against the Houston Astros, allowing one run over five innings but came away with a no-decision after the Astros took the lead later in the game.

Suppan has hit two career Major League home runs, both off Steve Trachsel of the New York Mets. His first was on September 10, 2005. The Cardinals won the game 4–2.[3] He hit his second in Game 3 of the 2006 National League Championship Series. The Cardinals would win the game 5–0 to take a 2–1 lead in the series.

Suppan started Game 7 of the 2006 NLCS against the New York Mets. He did not factor in the decision, giving up only one run in seven innings, but the Cardinals won 3–1, earning him the National League Championship Series MVP.[4] Suppan in the 2006 NLCS had a 0.60 ERA in 15 innings pitched.

During the 2006 offseason Suppan signed a four-year, $42 million contract with the Milwaukee Brewers.[5] Initial excitement in Milwaukee quickly waned as Suppan's performance declined over time. From 2007 to 2009, his walk rate, home runs allowed, and ERA climbed while his strikeouts have declined. While pitching in Milwaukee fans began an odd practice of wearing paper bags over their heads and throwing soup cans on to the field during Suppan's starts. Between 1995 and 2006, Suppan held a career ERA of 1.76 at Miller Park, where he was to pitch for the Brewers in 2007. Suppan is one of only 8 ballplayers who pitched in the NL in 2007 who won at least 12 games in each year from 2004–07, the others being Carlos Zambrano, Greg Maddux, Roy Oswalt, Tim Hudson, Derek Lowe, Jason Marquis and Johan Santana.

Suppan, along with teammates J. J. Hardy, Bill Hall, and Chris Capuano appeared in an episode of The Young and the Restless which aired on CBS on June 20, 2007.[6] On June 7, 2008, Suppan was placed on the 15-day disabled list, his first DL stint since 1996.[7] After being sent to the bullpen, Suppan's run with Milwaukee ended after 15 appearances. On June 7, 2010, the Brewers released Suppan. 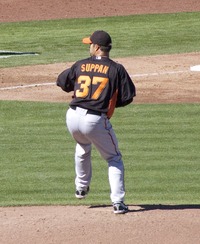 On April 4, 2011, the Kansas City Royals signed Suppan to a minor league deal.[11] He remained the entire season in Omaha.

Suppan announced his retirement as a player on January 2, 2014, his 39th birthday. The announcement was timed for 2 PM PST, to honor his mother, Kathleen Suppan, who died six years earlier on the same day and at the same time.[13]

As with many older pitchers, Suppan relies comparatively little on pitch speed to get outs. He is a finesse pitcher, using a variety of pitches with good movement to create weak contact for hitters. His expansive pitch repertoire includes a four-seam fastball and sinker in the mid-upper 80s, a cut fastball in the low-mid 80s, a changeup around 80, a big curveball at 70, and a slider in the upper 70s.[14]

Suppan, whose nickname is "Soup," is also a restaurateur. His restaurant, Soup's Grill, is jointly operated with his wife. It is located in Woodland Hills in Los Angeles, California, on Ventura Blvd.[15]

Suppan is a devout Catholic, appearing in the DVD "Champions Of Faith" and in Rosary Stars Praying the Gospel. He has also spoken to the National Catholic Register about his faith [1].

He appeared in a political advertisement alongside Patricia Heaton, Jim Caviezel, Mike Sweeney, and Kurt Warner, among others, during the 2006 World Series. The advertisement aired in opposition to Missouri Constitutional Amendment 2 (2006), which allows in Missouri any kind of embryonic stem cell research that is legal under federal law. The advertisement aired shortly after the airing of an earlier advertisement featuring actor Michael J. Fox.[16] The Fox advertisement had supported Amendment 2, as well as the campaign of United States Senate candidate Claire McCaskill. The Suppan advertisement did not explicitly mention the Senate race. The timing of both ads during a World Series that featured the St. Louis Cardinals was intended to draw the particular attention of Missouri voters.