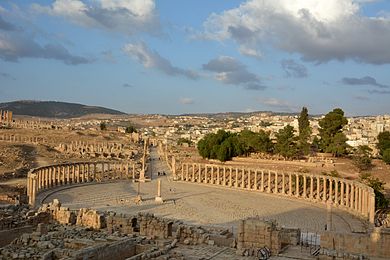 The Oval Forum and Cardo Maximus in ancient Jerash

Jerash, the Gerasa of Antiquity (Ancient Greek: Γέρασα, Hebrew: גַ'רַש), is the capital and largest city of Jerash Governorate (محافظة جرش), which is situated in the north of Jordan, 48 kilometres (30 mi) north of the capital Amman towards Syria. Jerash Governorate's geographical features vary from cold mountains to fertile valleys from 250 to 300 metres (820 to 980 ft) above sea level, suitable for growing a wide variety of crops.

In the latter Ottoman period, the city of Jerash's name was abandoned and changed to Sakib, yet this was not a permanent development, as the name "Jerash" reappears in Ottoman tax registers by the end of 16th century.[2][3]

A strong earthquake in 749 AD destroyed large parts of Jerash, while subsequent earthquakes along with the wars and turmoil contributed to additional destruction. Its destruction and ruins remained buried in the soil for hundreds of years until they were discovered by German Orientalist Ulrich Jasper Seetzen in 1806.[4] He began excavation and a return to life of the current Jerash by inhabitants of older villages. 70 years later, this was followed by the Muslim community, Circassians, who emigrated to Jordan from the Caucasus in 1878 after the Ottoman-Russian war. Subsequently a large community of people from Syria came to the area at the beginning of the 20th century.

Jerash is the site of the ruins of the Greco-Roman city of Gerasa, also referred to as Antioch on the Golden River. Ancient Greek inscriptions from the city as well as literary sources from both Iamvichou and the Great Etymology establish the foundation of the city as being by Alexander the Great or his general Perdiccas, who settled aged Macedonian soldiers there (Γερασμένος-Gerasmenos means aged person in Greek). This took place during the spring of 331 BC, when Alexander left Egypt, crossed Syria and then went to Mesopotamia. It is sometimes misleadingly referred to as the "Pompeii of the Middle East or Asia", referring to its size, extent of excavation and level of preservation (though Jerash was never buried by a volcano). Jerash is considered one of the most important and best preserved Roman cities in the Near East. It was a city of the Decapolis.

Jerash was the birthplace of the mathematician Nicomachus of Gerasa (Greek: Νικόμαχος) (c. 60 – c. 120 AD).

Recent excavations show that Jerash was already inhabited during the Bronze Age (3200 BC - 1200 BC). After the Roman conquest in 63 BC, Jerash and the land surrounding it were annexed by the Roman province of Syria, and later joined the Decapolis cities. In AD 90, Jerash was absorbed into the Roman province of Arabia, which included the city of Philadelphia (modern day Amman). The Romans ensured security and peace in this area, which enabled its people to devote their efforts and time to economic development and encouraged civic building activity.

In the second half of the 1st century AD, the city of Jerash achieved great prosperity. In AD 106, the Emperor Trajan constructed roads throughout the province, and more trade came to Jerash. The Emperor Hadrian visited Jerash in AD 129-130. The triumphal arch (or Arch of Hadrian) was built to celebrate his visit. A remarkable Latin inscription records a religious dedication set up by members of the imperial mounted bodyguard wintering there.

The city finally reached a size of about 800,000 square meters within its walls. The Persian invasion in AD 614 caused the rapid decline of Jerash. However, the city continued to flourish during the Umayyad Period, as shown by recent excavations. In AD 749, a major earthquake destroyed much of Jerash and its surroundings. During the period of the Crusades, some of the monuments were converted to fortresses, including the Temple of Artemis. Small settlements continued in Jerash during the Ayyubid, Mameluk[disambiguation needed] and Ottoman periods. Excavation and restoration of Jerash has been almost continuous since the 1920s.

In August 2015, two human skulls dating back to Neolithic period unearthed in Jerash which forms solid evidence of inhabitance of Jordan in that period especially with the existence of 'Ain Ghazal Neolithic settlement in Amman.

An archaeological excavation team from the University of Jordan has recently unearthed two human skulls that date back to the Neolithic period (7500-5500 BC) at a site in Jerash, the head of the excavation site said Saturday.

The importance of the discovery lies in the rarity of the skulls, as archaeologists estimate that a maximum of 12 sites across the world contain similar human remains, according to Maysoon Nahar, the dean of the university’s archaeology and tourism faculty.[5] 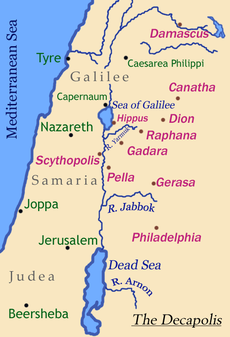 Map of the Decapolis showing location of Gerasa (Jerash)

Remains in the Greco-Roman Jerash include:

Most of these monuments were built by donations of the city's wealthy citizens. From AD 350, a large Christian community lived in Jerash, and between AD 400-600, more than thirteen churches were built, many with superb mosaic floors. A cathedral was built in the 4th century. An ancient synagogue with detailed mosaics, including the story of Noah, was found beneath a church. 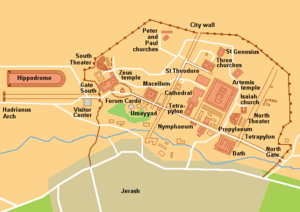 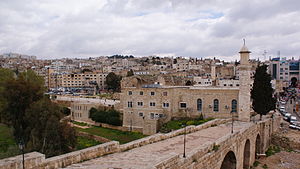 A Bridge connecting the ancient city of Gerasa to modern Jerash 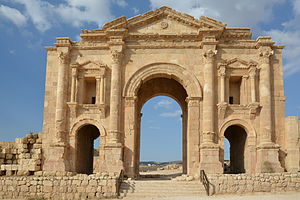 The Arch of Hadrian was built to honor the visit of emperor Hadrian to Jerash in 129/130 AD. 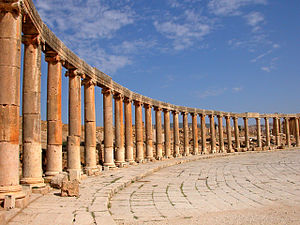 Jerash has developed dramatically in the last century with the growing importance of the tourism industry to the city. Jerash is now the second-most popular tourist attraction in Jordan, closely behind the splendid ruins of Petra. The ruins have been carefully preserved and spared from encroachment, with the modern city sprawling to the west of ancient Jerash's city walls.

In addition to inhabitants of old villages, Jerash became a destination for many successive waves of foreign migrants. The first wave started during the first half of the 20th century when the Syrians (Shwam) and the Circassians, camping nearby the old ruins. The new immigrants have been welcomed by the local people and settled down in the city. Later, Jerash also witnessed waves of Palestinian refugees who flowed to the city in 1948 and 1967.

Since 1981, the old city of Jerash has hosted the Jerash Festival of Culture and Arts,[6] a three-week-long summer program of dance, music, and theatrical performances. The festival is frequently attended by members of the royal family of Jordan and is hailed as one of the largest cultural activities in the region.

In addition performances of the Roman Army and Chariot Experience (RACE) were started at the hippodrome in Jerash. The show runs twice daily, at 11am and at 2pm, and at 10am on Fridays, except Tuesdays. It features forty-five legionaries in full armour in a display of Roman Army drill and battle tactics, ten gladiators fighting “to the death” and several Roman chariots competing in a classical seven lap race around the ancient hippodrome.

Jerash has an ethnically diverse population, with the majority being Arabs. Circassians and Armenians also exist in a slightly larger percentage compared to other cities in Jordan. The majority of Jerash's population are Muslims. However, the percentage of Christians (Orthodox and Catholics) in Jerash city is also among the highest in Jordan..

Jerash's economy depends largely on the tourists who visit the ancient city. It is also an agricultural city with over 1.25 million olive trees in the Governorate.[9] However, the location of Jerash, being just half an hour ride from two of the largest cities in Jordan, Amman and Irbid, contributed to the slowing down of Jerash's development, as investments tend to go to the larger cities. Jerash Private University is the only university in Jerash and is located on the highway that connects Jerash to Amman, in the south eastern suburbs of the town.[10]

According to "Jordan Times", the number of tourists who visited the ancient city of Jerash reached 214,000 during 2005. Director of Jerash Antiquities Department Mohammad Balawneh said that the number of non-Jordanian tourists was 182,000 last year, adding that the sum of entry charges reached JD900,000.[11] The Jerash Festival of Culture and Arts is an annual celebration of Arabic and international culture during the summer months. Jerash is located 46 km north of the capital city of Amman. The festival site is located within the ancient ruins of Jerash, some of which date to the Roman age (63 BC).[12] Jerash Festival is a festival which features poetry recitals, theatrical performances, concerts and other forms of art.[13] In 2008, authorities launched Jordan Festival, a nationwide theme-oriented event under which Jerash Festival became a component.[14] however the government revived the Jerash Festival as the "substitute proved to be not up to the message intended from the festival."