From Infogalactic: the planetary knowledge core
Jump to: navigation, search
This article is about the prophet. For other uses, see Jeremiah (disambiguation).

Jeremiah (/dʒɛrᵻˈmaɪ.ə/;[1] Hebrew: יִרְמְיָהוּ, Modern Hebrew: Yirməyāhū, IPA: jirməˈjaːhu, Tiberian: Yirmĭyahu, Greek: Ἰερεμίας, Arabic: إرميا Irmiya‎‎) meaning "Yah Exalts", also called the "Weeping prophet",[2] was one of the major prophets of the Hebrew Bible (Christian Old Testament). Jeremiah is traditionally credited with authoring the Book of Jeremiah, 1 Kings, 2 Kings and the Book of Lamentations,[3] with the assistance and under the editorship of Baruch ben Neriah, his scribe and disciple.

About a year after King Josiah of Judah had turned the nation toward repentance from the widespread idolatrous practices of his father and grandfather, Jeremiah's sole purpose was to reveal the sins of the people and explain the reason for the impending disaster (destruction by the Babylonian army and captivity),[6][7] "And when your people say, 'Why has the Lord our God done all these things to us?' you shall say to them, 'As you have forsaken me and served foreign gods in your land, so you shall serve foreigners in a land that is not yours.'"[8] God's personal message to Jeremiah, "Attack you they will, overcome you they can't,"[9] was fulfilled many times in the Biblical narrative: Jeremiah was attacked by his own brothers,[10] beaten and put into the stocks by a priest and false prophet,[11] imprisoned by the king,[12] threatened with death,[13] thrown into a cistern by Judah's officials,[14] and opposed by a false prophet.[15] When Nebuchadnezzar seized Jerusalem in 586 BC,[16] he ordered that Jeremiah be freed from prison and treated well.[17]

Jeremiah's ministry was active from the thirteenth year of Josiah, king of Judah (3298 AM,[18] or 626 BC[19]), until after the fall of Jerusalem and the destruction of Solomon's Temple in 3358 AM or 587 BC.[20] This period spanned the reigns of five kings of Judah: Josiah, Jehoahaz, Jehoiakim, Jehoiachin, and Zedekiah.[19] The Hebrew-language chronology Seder HaDoroth (published 1768) gives Jeremiah's final year of prophecy to be 3350 AM, whereby he transmitted his teachings to Baruch ben Neriah.[21] 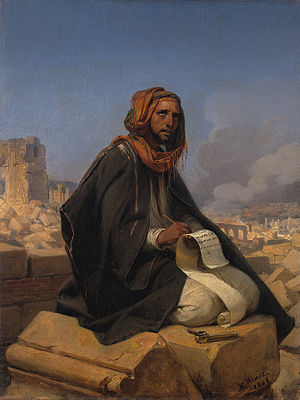 Horace Vernet, Jeremiah on the ruins of Jerusalem (1844)

Jeremiah was the son of Hilkiah, a kohen (Jewish priest) from the village of Anathoth.[22] The difficulties in the books of Jeremiah and Lamentations have prompted scholars to refer to him as "the weeping prophet".[23]

Jeremiah was called to prophetic ministry in c. 626 BC.[24] Jeremiah was called by YHWH to give prophesy of Jerusalem's destruction[25] that would occur by invaders from the north.[26] This was because Israel had been unfaithful to the laws of the covenant and had forsaken God by worshiping the Baals.[27] The people of Israel had even gone as far as building high altars to Baal in order to burn their children in fire as offerings.[28] This nation had deviated so far from God that they had broken the covenant, causing God to withdraw his blessings. Jeremiah was guided by God to proclaim that the nation of Israel would be faced with famine, plundered and taken captive by foreigners who would exile them to a foreign land.[29][30]

Yahweh called Jeremiah to prophetic ministry in about 626 BC,[24] about one year after Josiah king of Judah had turned the nation toward repentance from the widespread idolatrous practices of his father and grandfather. Ultimately, Josiah's reforms would not be enough to preserve Judah and Jerusalem from destruction, both because the sins of Manasseh, Josiah's grandfather, had gone too far [31] and as a result of Judah's return to Idolatry (Jer 11.10ff.). Such was the lust of the nation for false gods that after Josiah's death, the nation would quickly return to the gods of the surrounding nations.[32] Jeremiah was appointed to reveal the sins of the people and the coming consequences.[6][7]

In contrast to Isaiah, who eagerly accepted his prophetic call,[33] and similar to Moses who was less than eager,[34] Jeremiah resisted the call by complaining that he was only a child and did not know how to speak.[35] However, the Lord insisted that Jeremiah go and speak as commanded, and he touched Jeremiah's mouth and put the word of the Lord into Jeremiah's mouth.[36] God told Jeremiah to "Get yourself ready!"[37] The character traits and practices Jeremiah was to acquire in order to be ready are specified in Jeremiah 1 and include not being afraid, standing up to speak, speaking as told, and going where sent.[38] Other disciplines that contributed to the training of the young prophet and confirmation of his message are described as not turning to the people,[39] not marrying or fathering children,[40] not going to weddings or funerals,[41] not sitting in a house with feasting,[42] and not sitting in the company of merrymakers.[43] Since Jeremiah emerges well trained and fully literate from his earliest preaching, the relationship between him and the Shaphan family has been used to suggest that he may have trained at the scribal school in Jerusalem over which Shaphan presided.[44][45]

In his early ministry, Jeremiah was primarily a preaching prophet,[46] going where the Lord directed him to preach oracles throughout Israel.[45] He condemned idolatry,[47] the greed of priests, and false prophets.[48] Many years later, God instructed Jeremiah to write down these early oracles and other messages.[49] 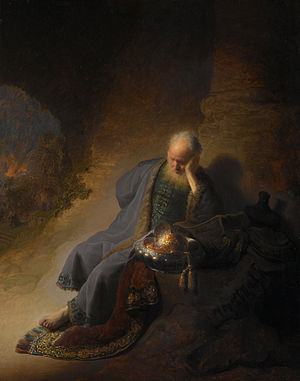 Jeremiah's ministry prompted naysayers to plot against him. Even the people of Anathoth sought to kill him. (Jer.11:21-23) Unhappy with Jeremiah's message, possibly for concern that it would shut down the Anathoth sanctuary, his priestly kin and the men of Anathoth conspired to take his life. However, the Lord revealed the conspiracy to Jeremiah, protected his life, and declared disaster for the men of Anathoth.[45][50] When Jeremiah complains to the Lord about this persecution, the Lord explains that the attacks on him will become worse.[51]

Physical persecution started when the priest Pashur ben Immer, a temple official, sought out Jeremiah to have him beaten and put him in the stocks at the Upper Gate of Benjamin for a day. After this, Jeremiah expresses lament over the difficulty that speaking God's word has caused him and regrets becoming a laughingstock and the target of mockery.[52] He recounts how if he tries to shut the word of the Lord inside and not mention God's name, the word becomes like fire in his heart and he is unable to hold it in.[53]

At the same time while Jeremiah was prophesying coming destruction because of the sins of the nation, a number of other prophets were prophesying peace.[54] The Lord had Jeremiah speak against these false prophets.

For example, during the reign of King Zedekiah, The Lord instructed Jeremiah to make a yoke of the message that the nation would be subject to the king of Babylon and that listening to the false prophets would bring a much worse disaster. The prophet Hananiah opposed Jeremiah's message. He took the yoke off of Jeremiah's neck, broke it, and prophesied to the priests and all the people that within two years the Lord would break the yoke of the king of Babylon, but the Lord spoke to Jeremiah saying "Go and speak to Hananiah saying, you have broken the yoke of wood, but you have made instead a yoke of iron." (see: Jeremiah 28:13)

The Biblical narrative portrays Jeremiah as being subject to additional persecutions. After Jeremiah prophesied that Jerusalem would be handed over to the Babylonian army, the king's officials, including Pashur the priest, tried to convince King Zedekiah that Jeremiah should be put to death because he was discouraging the soldiers as well as the people. Zedekiah answered that he would not oppose them. Consequently, the king's officials took Jeremiah and put him down into a cistern, where he sank down into the mud. The intent seemed to be to kill Jeremiah by allowing him to starve to death in a manner designed to allow the officials to claim to be innocent of his blood.[55] A Cushite rescued Jeremiah by pulling him out of the cistern, but Jeremiah remained imprisoned until Jerusalem fell to the Babylonian army in 587 BC.[56]

The Babylonians released Jeremiah, and showed him great kindness, allowing Jeremiah to choose the place of his residence, according to a Babylonian edict. Jeremiah accordingly went to Mizpah in Benjamin with Gedaliah, who had been made governor of Judea.[57]

Johanan succeeded Gedaliah, who had been assassinated by an Israelite prince in the pay of Ammon "for working with the Babylonians." Refusing to listen to Jeremiah's counsel, Johanan fled to Egypt, taking with him Jeremiah and Baruch, Jeremiah's faithful scribe and servant, and the king's daughters.[58] There, the prophet probably spent the remainder of his life, still seeking in vain to turn the people to God from whom they had so long revolted.[58] There is no authentic record of his death.

In Jewish rabbinic literature, especially the aggadah, Jeremiah and Moses are often mentioned together;[59] their life and works being presented in parallel lines. The following ancient midrash is especially interesting, in connection with Deut. xviii. 18, in which "a prophet like Moses" is promised: "As Moses was a prophet for forty years, so was Jeremiah; as Moses prophesied concerning Judah and Benjamin, so did Jeremiah; as Moses' own tribe [the Levites under Korah] rose up against him, so did Jeremiah's tribe revolt against him; Moses was cast into the water, Jeremiah into a pit; as Moses was saved by a slave (the slave of Pharaoh's daughter); so, Jeremiah was rescued by a slave (Ebed-melech); Moses reprimanded the people in discourses; so did Jeremiah."[60] 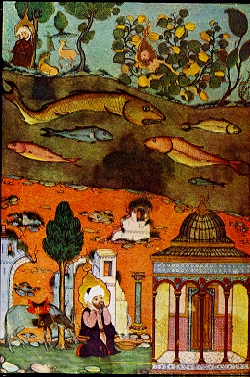 As with many other prophets of the Hebrew Bible, Jeremiah is also regarded as a prophet in Islam by many Muslims. Jeremiah is not mentioned in the Qur'an, but Muslim exegesis and literature narrates many instances from the life of Jeremiah and tradition fleshes out his narrative. For example, some hadiths and tafsirs narrate that the Parable of the Hamlet in Ruins is about Jeremiah.[61] Also, in Sura 17(Al-Isra), Ayah 4–7, that is about the two corruptions of children of Israel on the earth, some hadith and tafsir cite that one of these corruptions is the imprisonment and persecution of Jeremiah.[62] According to Ahmadis the memorization of the Qur'an fulfills Jeremiah's prophecy, "I will put my Law within them and I will write it upon their hearts".[63]

Muslim literature narrates a detailed account of the destruction of Jerusalem, which parallels the account given in the Book of Jeremiah.[64]

'Abdul-Bahá mentions prophecies made by Jeremiah which refer to a man called the Branch as applying to Bahá'u'lláh.[65]

Scholars cannot prove the authorship of Jeremiah with any certainty, although consensus has gathered around a thesis of multiple sources, mainly because of the contrast between the poetic discourses and the prose narrative. Some modern scholars think the Deuteronomic School edited Jeremiah because of the similarity of phrasing between the books of Jeremiah and Deuteronomy. For example, Egypt is referred to as an "iron furnace" in both Jeremiah 11:4 and Deuteronomy 4:20.[66] They also share a similar view of divine justice.[66]

In July 2007, Assyrologist Michael Jursa translated a cuneiform tablet dated to 595 BC, as describing a Nabusharrussu-ukin as "the chief eunuch" of Nebuchadnezzar II of Babylon. Jursa hypothesized that this reference might be to the same individual as the Nebo-Sarsekim mentioned in Jeremiah 39:3.[67][68]

Jeremiah inspired the French noun jérémiade, and subsequently the English jeremiad, meaning "a lamentation; mournful complaint,"[69] or further, "a cautionary or angry harangue."[70]

Jeremiah has periodically been a popular first name in the United States, beginning with the early Puritan settlers, who often took the names of Biblical prophets and apostles.