Bitzius was born at Murten, where his father was pastor. The Bitzius family had once belonged to the Bernese patriciate, but was known for its craftsmen and pastors since the 17th century. In 1804 the family home was moved to Utzenstorf, a village in the Bernese Emmental. Here young Bitzius grew up, receiving his early education and consorting with the boys of the village, as well as helping his father to cultivate his glebe. In 1812 he went to complete his education at Bern.[1] He was a founding member of the Student Society Zofingia, the second-oldest fraternity in Switzerland (founded in 1819).

In 1820 he was received as a pastor. In 1821 he enrolled for a year at the University of Göttingen, but returned home in 1822 to act as his father's assistant. On his father's death (1824) he went in the same capacity to Herzogenbuchsee, and later to Bern (1829). Early in 1831 he went as assistant to the aged pastor of the village of Lützelflüh, in the Lower Emmental (between Langnau and Burgdorf), being soon elected his successor (1832) and marrying one of his granddaughters, Henriette Zeender[2] (1833).[1]

He spent the rest of his life in Lützelflüh, where he died, leaving three children (the son was a pastor, the two daughters married pastors).[1] During the 1840s, he steadfastly opposed radicalism and secularism and placed a conservative emphasis on piety and ecclesiastical authority.[3] There are lives of Bitzius by C. Manuel, in the Berlin edition of Bitzius's works (Berlin, 1861), and by J. Ammann in vol. i. (Bern, 1884) of the Sammlung Bernischer Biographien.

Bitzius started writing late in life. His first work, the Der Bauernspiegel, oder die Lebensgeschichte des Jeremias Gotthelf, appeared in 1837. It purported to be the life of Jeremias Gotthelf, narrated by himself, and this name was later adopted by the author as his pen name. It sketches the development of a poor country orphan boy, but is not an autobiography. It is a living picture of Bernese (or, strictly speaking, Emmental) village life, true to nature, and not attempting to gloss over its defects and failings. It is written (like the rest of his works) in German, but contains expressions from the Bernese dialect of the Emmental, though Bitzius was not (like Auerbach) a peasant by birth, but belonged to the educated classes, so that he reproduces what he had seen and learnt, and not what he had himself personally experienced. The book was a great success, as it was a picture of real life, and not of fancifully beribboned eighteenth-century villagers.[1] Henceforth Bitzius was a prolific writer, and in the last 18 years of his life became one of the important novelists not only of Switzerland but of the German language in general. 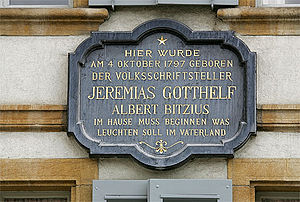 Commemorative plaque at his birth house in Murten/Morat

His best known work is without doubt the short novel The Black Spider (Die schwarze Spinne), a semi-allegorical tale of the plague in form of the titular monster that devastates a Swiss valley community; first as a result of a pact with the devil born out of need and a second time due to the moral decay that releases the monster from its prison again.

In the novel 2666 by Roberto Bolaño Gotthelf is mentioned as the subject of the novel Bitzius:

(...) and in Bitzius, a novel less than one hundred pages long, similar in some ways to Mitzi's Treasure, (...) and that told the story of the life of Albert Bitzius, pastor of Lützelflüh, in the canton of Bern, an author of sermons as well as a writer under the pseudonym Jeremias Gotthelf.[4]

All six films were directed by the Swiss film director Franz Schnyder.