Jermyn Street is a one-way street in the St James's area of the City of Westminster in London, to the south of, parallel, and adjacent to Piccadilly.

It is widely known as a place where the shops are almost exclusively aimed at the gentlemen's clothing market and it is famous for its resident shirtmakers such as Turnbull & Asser, Hawes & Curtis, Thomas Pink, Harvie & Hudson, Charles Tyrwhitt and T. M. Lewin. Gentlemen's outfitters Hackett and DAKS are also located on Jermyn Street, as well as shoe- and boot-makers John Lobb and Foster & Son.

A number of other businesses occupy premises on the street, such as the men's luxury goods brand Alfred Dunhill, who first took a premises on the corner of Jermyn Street and Duke street in 1907; barbers Geo.F. Trumper, and Taylor of Old Bond Street; cigar shop Davidoff; as well as Britain's oldest cheese shop, Paxton & Whitfield, trading since 1797.

Tramp nightclub and the 70-seat Jermyn Street Theatre (the West End's smallest) are also on the street. 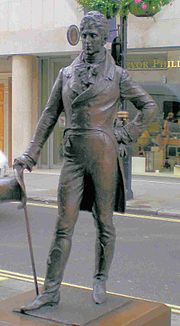 A statue of Beau Brummell in Jermyn Street.

Jermyn Street was created by and named after Henry Jermyn, 1st Earl of St Albans, as part of his development of the St James's area of central London, around the year 1664.[1] The street was first recorded as "Jarman Streete" in the 1667 rate books of St Martin's, listing 56 properties. In 1675 there were 108 names listed.[2]

The Duke of Marlborough lived there when he was Colonel Churchill, as did Isaac Newton (at No. 88, from 1696-1700; he then moved next door to No. 87, from 1700 to 1709, during which time he worked as Warden of the Mint), the mid-18th century highwayman and apothecary William Plunkett, the Duchess of Richmond, the Countess of Northumberland and the artist Sherwin (in whose rooms in 1782 the actress Sarah Siddons sat for him for her portrait as the Tragic Muse).

The Gun Tavern was one of the great resorts for foreigners of revolutionary tastes during the end of the 18th century, whilst Grenier's Hotel was patronised by French refugees. At the Brunswick Hotel, Louis Napoleon took up his residence under the assumed name of Count D'Arenberg on his escape from captivity in the fortress of Ham. Twentieth-century residents included the 1930s 'big band' singer Al Bowlly (killed in his flat on the street by a parachute mine during the Blitz in 1941).

Though he did not live there, a statue of Beau Brummell stands on Jermyn Street at its junction with Piccadilly Arcade, as embodying its elegant clothing values. Aleister Crowley lived in No. 93 during the Second World War up until April 1944.

Many tailors owned or still own the houses along the street and often rented out rooms to people. No. 22, Jermyn Street, for instance was once owned by Italian silk merchant Cesare Salvucci and a military tailor who rented rooms out to people such as the banker Theodore Rothschild.[3]