On September 16, 1905, a then 18-year-old Travers partnered with Herbert Strong to tie for second place, shooting 72, in a four-ball tournament held at Fox Hills Golf Club on Staten Island as part of the 1905 Metropolitan Open.[1] The stroke play portion of the tournament was won by Alex Smith.[1]

In 1915 Travers won the U.S. Open at Baltusrol Golf Club, making him the second of the five amateurs to win the event. It was his only top ten finish in four appearances at the U.S. Open – he never entered the tournament again once he had won it.

Although all of Travers' notable victories came as an amateur, he later became a teaching professional and gave exhibitions.

Travers died on March 29, 1951 in East Hartford, Connecticut. He is remembered as one of the finest amateur golfers of all time. He won the U.S. Amateur four times and the U.S. Open in 1915. He was inducted into the World Golf Hall of Fame in 1976.[2] 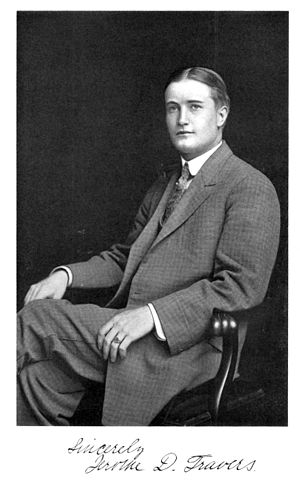