From Infogalactic: the planetary knowledge core
Jump to: navigation, search
Not to be confused with Jèrriais.

This official stone which marks the inauguration of a municipal office in 1999 bears the names of the Connétable and the Procureurs du Bien Public of Saint Helier. 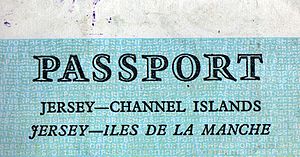 Jersey Legal French, also known as Jersey French (French: français de jersey), is the official dialect of French used administratively in Jersey. Since the anglicisation of the island, it survives as a written language for some laws, contracts, and other documents. Jersey's parliament, the States of Jersey, is part of the Assemblée parlementaire de la Francophonie. The English language has been allowed in parliamentary debates since February 2, 1900; the current use of French in the parliament is generally restricted to formalities (prayers, ceremonies, formulæ).

Jersey Legal French is not to be confused with Jèrriais, a variety of the Norman language also called Jersey Norman-French, spoken on the island.

The French of Jersey differs little from that of France. It is characterised by several terms particular to Jersey administration and a few expressions imported from Norman.

It is notable that the local term for the archipelago is îles de la Manche (Channel Islands) — îles anglo-normandes (Anglo-Norman Islands) is a somewhat recent invention in continental French.

As in Swiss French and Belgian French, the numbers 70 and 90 are septante and nonante, respectively, not soixante-dix and quatre-vingt-dix (compare the use of nénante for 90 in Jèrriais).

Initial capital letters are commonly used in writing the names of the days of the week and months of the year.

Jersey English has imported a number of Jersey Legal French titles and terminology. Many of these, in turn, derive from Jèrriais. The following are examples likely to be encountered in daily life and in news reports in Jersey: rapporteur, en défaut (in default, i.e. late for a meeting), en désastre, au greffe, greffier (clerk to Court or the States), bâtonnier (lawyer in charge of Bar, particularly for legal aid), mandataire, autorisé (returning officer at elections, or other functions), projet (parliamentary bill), vraic, côtil, temps passé (time past), vin d'honneur (municipal or official reception), Centenier, Vingtenier, Chef de Police (senior Centenier), Ministre Desservant, branchage (pronounced in English as the Jèrriais cognate even though spelt in the French manner – trimming hedges and verges on property border; also used jocularly for a haircut), Seigneur (feudal lord of the manor).