The Jerusalem artichoke (Helianthus tuberosus), also called sunroot, sunchoke, earth apple or topinambour, is a species of sunflower native to eastern North America, and found from eastern Canada and Maine west to North Dakota, and south to northern Florida and Texas.[2] It is also cultivated widely across the temperate zone for its tuber, which is used as a root vegetable.[3]

Helianthus tuberosus is a herbaceous perennial plant growing to 1.5–3 m (4 ft 11 in–9 ft 10 in) tall with opposite leaves on the upper part of the stem but alternate below.[4] The leaves have a rough, hairy texture. Larger leaves on the lower stem are broad ovoid-acute and can be up to 30 cm (12 in) long. Leaves higher on the stem are smaller and narrower.[5]

Native Americans before the arrival of the Europeans cultivated Helianthus tuberosus as a food source. The tribes who first grew it traded it to other tribes in other regions. The tubers persist for years after being planted, so that the species expanded its range from central North America to the eastern and western regions. Early European colonists learned of this, and sent tubers back to Europe, where it became a popular crop and naturalized there. It later gradually fell into obscurity in North America, but attempts to market it commercially have been successful in the late 1900s and early 2000s.[5][7]

The artichoke contains about 2% protein, no oil, and a surprising lack of starch. It is rich in the carbohydrate inulin (76%), which is a polymer of the monosaccharide fructose. Tubers stored for any length of time will convert their inulin into its component fructose. Jerusalem artichokes have an underlying sweet taste because of the fructose, which is about one and a half times as sweet as sucrose.[7]

Jerusalem artichokes have also been promoted as a healthy choice for type 2 diabetics, because fructose is better tolerated by people who are type 2 diabetic. It has also been reported as a folk remedy for diabetes.[7] Temperature variances have been shown to affect the amount of inulin the Jerusalem artichoke can produce. When not in tropical regions, it has been shown to make less inulin than when it is in a warmer region.[8] 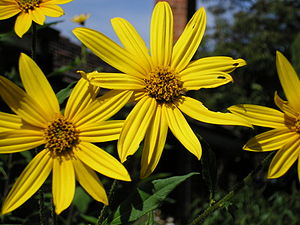 Despite its name, the Jerusalem artichoke has no relation to Jerusalem, and it is not a type of artichoke, though the two are distantly related as members of the daisy family. The origin of the name is uncertain. Italian settlers in the United States called the plant girasole, the Italian word for sunflower, because of its resemblance to the garden sunflower (both plants are members of the genus Helianthus). Over time, the name girasole (pronounced closer to ʤiraː'zul in southern Italian dialects) may have been changed to Jerusalem.[9] The English later corrupted girasole artichoke (meaning, "sunflower artichoke") to Jerusalem artichoke. Another explanation for the name is that the Puritans, when they came to the New World, named the plant with regard to the "New Jerusalem" they believed they were creating in the wilderness.[7] There have also been various other names applied to the plant, such as the French or Canada potato, topinambour, and lambchoke. Sunchoke, a name by which it is still known today, was invented in the 1960s by Frieda Caplan, a produce wholesaler who was trying to revive the plant's appeal.[7]

The artichoke part of the Jerusalem artichoke's name comes from the taste of its edible tuber. Samuel de Champlain, the French explorer, sent the first samples of the plant to France, noting its taste was similar to that of an artichoke.[citation needed]

The name "topinambur", in one account, dates from 1615, when a member of the Brazilian coastal tribe called the Tupinambà visited the Vatican at the same time that a sample of the tuber from Canada was on display there, presented as a critical food source that helped French Canadian settlers survive the winter. The New World connection resulted in the name topinambur being applied to the tuber, the word now used in French, German, Italian, Romanian, Russian, and Spanish.[10]

Jerusalem artichokes were first cultivated by the Native Americans long before the arrival of the Europeans; this extensive cultivation obscures the exact native range of the species.[2] The French explorer Samuel de Champlain found domestically grown plants at Cape Cod in 1605. He then brought the plant back with him to France. By the mid-1600s, the Jerusalem artichoke had become a very common vegetable for human consumption in Europe and the Americas and was also used for livestock feed in Europe and colonial America.[7] The French in particular were especially fond of the vegetable, which reached its peak popularity at the turn of the 19th century.[7] The Jerusalem artichoke was titled 'best soup vegetable' in the 2002 Nice Festival for the Heritage of the French Cuisine.

They have also been called the "Canadian truffle". In France they are associated, along with rutabagas, with the deprivations of the years of Nazi Occupation during World War II, where the rationing and scarcity of traditional foods made them a regular part of the French diet until at the end of the war they returned to their customary role as animal feed.[11] 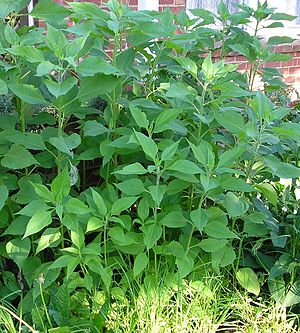 Young plants in a garden 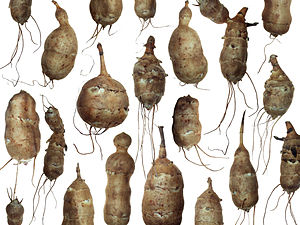 Unlike most tubers, but in common with many other members of the Asteraceae (including the artichoke), the tubers store their carbohydrate as inulin (not to be confused with insulin) rather than as starch. For this reason, Jerusalem artichoke tubers are an important source of inulin used as a dietary fiber in food manufacturing.[12]

Jerusalem artichokes are easy to cultivate, which tempts gardeners to simply leave them completely alone to grow. The quality of the edible tubers degrades, however, unless the plants are dug up and replanted in fertile soil. This can be a chore, as even a small piece of tuber will grow if left in the ground, making the hardy plant a potential weed. In fact, the plant can ruin gardens by smothering or overshadowing nearby plants and can overtake huge areas if left untamed. Commercial fields growing sunchoke which then change to other vegetables or crops often must be treated with glyphosate to stop the spread of the sunchokes. Each sunchoke root can make an additional 75 to as many as 200 tubers by fall end.

The tubers are sometimes used as a substitute for potatoes:[13] they have a similar consistency, and in their raw form have a similar texture, but a sweeter, nuttier flavor; raw and sliced thinly, they are fit for a salad. Their inulin form of carbohydrates give the tubers a tendency to become soft and mushy if boiled, but they retain their texture better when steamed. The inulin cannot be broken down by the human digestive system,{a confusing statement since the colon is part of the digestive system}[14] but is metabolized by bacteria in the colon. This can cause flatulence and, in some cases, gastric pain. Gerard's Herbal, printed in 1621, quotes the English planter John Goodyer on Jerusalem artichokes:[15]

which way soever they be dressed and eaten, they stir and cause a filthy loathsome stinking wind within the body, thereby causing the belly to be pained and tormented, and are a meat more fit for swine than men.

Jerusalem artichokes have 650 mg potassium per 1 cup (150g) serving. They are also high in iron, and contain 10-12% of the US RDA of fiber, niacin, thiamine, phosphorus and copper.[16]

Jerusalem artichokes can be used as animal feed, but they must be washed before being fed to most animals. Pigs can forage, however, and safely eat them directly from the ground. The stalks and leaves can be harvested and used for silage, though cutting the tops greatly reduces the harvest of the roots.

Jerusalem artichoke brandy smells fruity and has a slight nutty-sweet flavour. It is characterised by an intense, pleasing, earthy note. The tubers are washed and dried in an oven before being fermented and distilled. It can be further refined to make "Red Rossler" by adding common tormentil, and other ingredients such as currants, to produce a somewhat bitter and astringent decoction. It is used as digestif, as well as a remedy for diarrhoea or abdominal pain.

In the 1980s, the Jerusalem artichoke also gained some notoriety when its seeds were planted by midwestern US farmers at the prodding of an agricultural pyramid scheme. There was little market for the tuber in that part of the US at the time, but farmers were assured it would soon appear on the commodities market. The only profits were realized by the initial distributors and the first few levels of farmers (who sold their seeds to subsequent levels of the pyramid). As a result, many of the farms that had planted large quantities of the crop were ruined.[18][19]