From Infogalactic: the planetary knowledge core
Jump to: navigation, search
For other uses, see Jester (disambiguation). 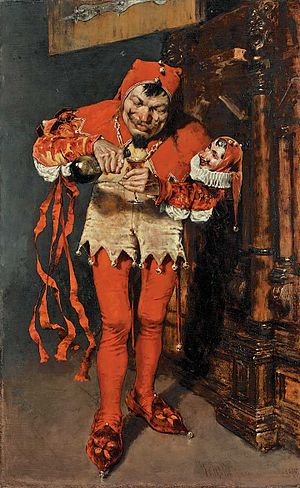 Depiction of a jester by William Merritt Chase.

A jester, court jester or fool was historically an entertainer during the medieval and Renaissance eras who was a member of the household of a nobleman employed to entertain him and his guests. A jester was also an itinerant performer who entertained common folk at fairs and markets. Jesters are also modern day entertainers who resemble their historical counterparts. Jesters in medieval times are often thought to have worn brightly coloured clothes and eccentric hats in a motley pattern and their modern counterparts usually mimic this costume. In medieval times jesters entertained with a wide variety of skills: principal ones included songs, music, and storytelling; additional ones included acrobatics, juggling, telling jokes, and magic. Much of the entertainment was performed in a comic style and many jesters made contemporary jokes in word or song about people or events well known to their audiences.

The modern use of the English word jester did not come into use until the mid-16th century during Tudor times.[1] This modern term derives from the older form gestour, or jestour, originally from Anglo-Norman (French) meaning story-teller or minstrel. Other earlier terms included fol, disour, and bourder. These terms described entertainers who differed in their skills and performances but who all shared many similarities in their role as comedic performers for their audiences.[2][3][4] 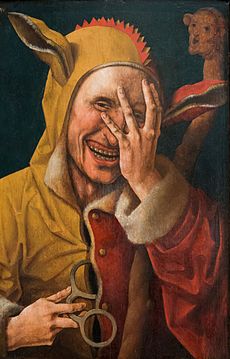 The Royal Shakespeare Company provides historical context for the role of the fool:

In ancient times, courts employed fools and by the Middle Ages the jester was a familiar figure. In Renaissance times, aristocratic households in Britain employed licensed fools or jesters, who sometimes dressed as other servants were dressed, but generally wore a motley (i.e. parti-coloured) coat, hood with ass's (i.e. donkey) ears or a red-flannel coxcomb and bells. Regarded as pets or mascots, they served not simply to amuse but to criticise their master or mistress and their guests. Queen Elizabeth (reigned 1558–1603) is said to have rebuked one of her fools for being insufficiently severe with her. Excessive behaviour, however, could lead to a fool being whipped, as Lear threatens to whip his fool.[5]

One may conceptualize fools in two camps: those of the natural fool type and those of the licensed fool type. Whereas the natural fool was seen as innately nit-witted, moronic, or mad, the licensed fool was given leeway by permission of the court. In other words, both were excused, to some extent, for their behavior, the first because he "couldn't help it", and the second by decree.

Distinction was made between fools and clowns, or country bumpkins. The fool's status was one of privilege within a royal or noble household. His folly could be regarded as the raving of a madman but was often deemed to be divinely inspired. The 'natural' fool was touched by God. Much to Gonerill's annoyance, Lear's 'all-licensed' Fool enjoys a privileged status. His characteristic idiom suggests he is a "natural" fool, not an artificial one, though his perceptiveness and wit show that he is far from being an idiot, however "touched" he might be.[5]

Scholar David Carlyon has cast doubt on the "daring political jester", calling historical tales "apocryphal", and concluding that "popular culture embraces a sentimental image of the clown; writers reproduce that sentimentality in the jester, and academics in the Trickster", but it "falters as analysis".[6]

Jesters could also give bad news to the King that no one else would dare deliver. The best example of this is in 1340, when the French fleet was destroyed at the Battle of Sluys by the English. Phillippe VI's jester told him the English sailors "don't even have the guts to jump into the water like our brave French".[7] 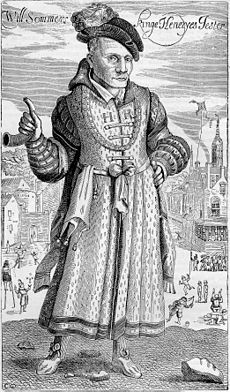 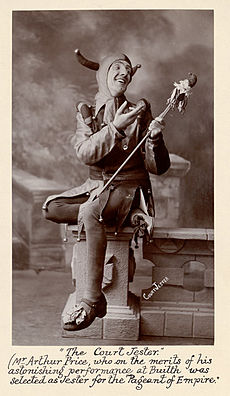 A court jester selected for the Pageant of Empire in 1909

Many courts throughout English royal history employed entertainers and most had professional fools, sometimes called licensed fools. Entertainment included music, juggling, clowning, and the telling of jokes and riddles. Henry VIII of England employed a jester named Will Sommers.

During the reigns of Elizabeth I and James I of England, William Shakespeare wrote his plays and performed with his theatre company the Lord Chamberlain's Men (later called the King's Men). Clowns and jesters were featured in Shakespeare's plays, and the company's expert on jesting was Robert Armin, author of the book Fooled upon Foole. In Shakespeare's Twelfth Night, Feste the jester is described as "wise enough to play the fool".

King James VI of Scotland also employed a jester called Archibald Armstrong. During his lifetime Armstrong was given great honours at court. He was eventually thrown out of the King's employment when he over-reached himself and insulted too many influential people. Even after his disgrace, books telling of his jests were sold in London streets. He held some influence at court still in the reign of Charles I and estates of land in Ireland. Charles later employed a jester called Jeffrey Hudson who was very popular and loyal. Jeffrey Hudson had the title of Royal Dwarf because he was short of stature. One of his jests was to be presented hidden in a giant pie from which he would leap out. Hudson fought on the Royalist side in the English Civil War. A third jester associated with Charles I was called Muckle John. 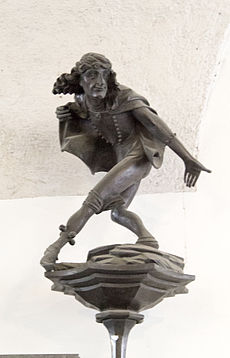 The tradition of court jesters came to an end in Britain when Charles I was overthrown in the Civil War. As a Puritan Christian republic, England under the Lord Protector Oliver Cromwell had no place for such things as jesters. English theatre also suffered and a good many actors and entertainers relocated to Ireland where things were little better (see Irish theatre).[citation needed]

After the Restoration, Charles II did not reinstate the tradition of the court jester, but he did greatly patronize the theatre and proto-music hall entertainments, especially favouring the work of Thomas Killigrew. Though Killigrew was not officially a jester, Samuel Pepys in his famous diary does call Killigrew "The King's fool and jester, with the power to mock and revile even the most prominent without penalty" (12 February 1668). The last British nobles to keep jesters were the Queen Mother's family, the Bowes-Lyons.

In the 18th century, jesters had died out except in Russia, Spain and Germany. In France and Italy, travelling groups of jesters performed plays featuring stylized characters in a form of theatre called the commedia dell'arte. A version of this passed into British folk tradition in the form of a puppet show, Punch and Judy. In France the tradition of the court jester ended with the French Revolution.

In 1968, the Canada Council awarded a $3,500 grant to Joachim Foikis of Vancouver "to revive the ancient and time-honoured tradition of town fool".[9][10] In the 21st century, the jester is still seen at medieval-style fairs and pageants. 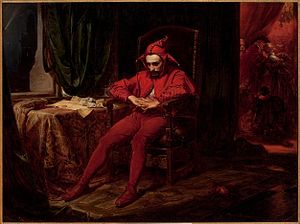 Stańczyk by Jan Matejko
The jester is the only person at a 1514 royal ball troubled by the news that the Russians have captured Smolensk.

Poland's most famous court jester was Stańczyk, whose jokes were usually related to political matters, and who later became a historical symbol for Poles.[11][12]

In 2004 English Heritage appointed Nigel Roder ("Kester the Jester") as the State Jester for England, the first since Muckle John 355 years previously.[13] However following an objection by the National Guild of Jesters, English Heritage accepted they were not authorised to grant such a title.[14] Roder was succeeded as "Heritage Jester" by Pete Cooper ("Peterkin the Fool").[15]

In Germany, Till Eulenspiegel is a folkloric hero dating back to medieval times and ruling each year over Fasching or Carnival time, mocking politicians and public figures of power and authority with political satire like a modern-day court jester. He holds a mirror to make us aware of our times (Zeitgeist), and his sceptre, his "bauble" or marotte, is the symbol of his power. 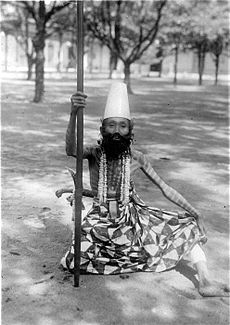 In 17th century Spain, little people, often with deformities, were employed as buffoons to entertain the king and his family, especially the children. In Velázquez's painting Las Meninas two dwarves are included: Mari Bárbola a female dwarf from Germany with hydrocephalus, and Nicolasito Portusato from Italy. Mari Bárbola can also be seen in a later portrait of princess Margarita Teresa in mourning by Juan Bautista Martinez del Mazo. There are other paintings by Velázquez that include court dwarves such as Prince Balthasar Charles With a Dwarf.

In Japan from the 13th to 18th centuries, the taikomochi, a kind of male geisha, attended the feudal lords (daimyo). They entertained mostly through dancing and storytelling, and were at times counted on for strategic advice. By the 16th century they would fight alongside their lord in battle in addition to their other duties.

Tonga was the first royal court to appoint a court jester in modern times; Taufa'ahau Tupou IV, the King of Tonga, appointed JD Bogdanoff to that role in 1999.[16] Bogdanoff was later embroiled in a financial scandal.[17]

The jester as a symbol

The root of the word "fool" is from the Latin follis, which means "bag of wind" or that which contains air or breath.[citation needed]

In Tarot, "The Fool" is a card of the Major Arcana. The tarot depiction of the Fool includes a man (or less often, a woman) juggling unconcernedly or otherwise distracted, often with a dog or cat his heels. The fool is in the act of unknowingly walking off the edge of a cliff, precipice or other high place. Another Tarot character is Death. In the Middle Ages, Death is often shown in Jester's garb because "The last laugh is reserved for death."[citation needed] Also, Death humbles everyone just as jesters make fun of everyone regardless of standing.

In literature, the jester is symbolic of common sense and of honesty, notably in King Lear, where the court jester is a character used for insight and advice on the part of the monarch, taking advantage of his license to mock and speak freely to dispense frank observations and highlight the folly of his monarch. This presents a clashing irony as a "greater" man could dispense the same advice and find himself being detained in the dungeons or even executed. Only as the lowliest member of the court can the jester be the monarch's most useful adviser.

Author Alan Gordon also writes about jesters as advisers to the king, who actually make up a super-secret spy ring that try to keep peace and control the leaders of different countries. The Fool's Guild of these novels is portrayed as a mockery to the church, and they refer to Jesus Christ as "Their Savior, The First Fool."

File:PuckCover.jpg
American lawyer and politician Roscoe Conkling depicted as a jester in an 1884 cartoon.

In similar vein, buffoon is a term for someone who provides amusement through inappropriate appearance and/or behavior.[18]

Originally the term was used to describe a ridiculous but amusing person. The term is now frequently used in a derogatory sense to describe someone considered foolish, or someone displaying inappropriately vulgar, bumbling or ridiculous behavior that is a source of general amusement.

The term originates from the old Italian "buffare", meaning to puff out one's cheeks[19] that also applies to bouffon. 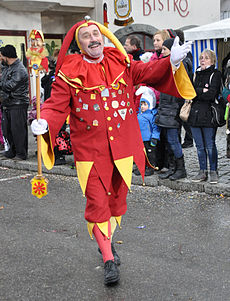 Jester at Weingarten, Germany, in 2015

Today, the jester is portrayed in different formats of medieval reenactment and entertainment, including film, stage performance, and carnival. During the Burgundian and the Rhenish carnival, cabaret performances in local dialect are held. In Brabant this person is called a "tonpraoter" or "sauwelaar", and is actually in or on a barrel. In Limburg they are named "buuttereedner" or "buutteredner" and in Zeeland they are called an "ouwoer". They all perform a cabaret speech in dialect, during which many current issues are reviewed. Often there are local situations and celebrities from local and regional politics who are mocked, ridiculed and insulted. The "Tonpraoter" or "Buuttereedner" may be considered successors of the jesters.[20]