Jesus College is a constituent college of the University of Cambridge, England. The college's full name is The College of the Blessed Virgin Mary, Saint John the Evangelist and the glorious Virgin Saint Radegund, near Cambridge. Its common name comes from the name of its chapel, Jesus Chapel.

The college was established between 1496 and 1516, on the site of the twelfth-century Benedictine nunnery of St Mary and St Radegund by John Alcock, then Bishop of Ely. The cockerel is a symbol of Jesus College, after the surname of its founder, Alcock.

The college is also known for its grounds, which are unlike those of Cambridge’s other old colleges, being much more spacious. Set back from Jesus Lane, all the courts are open on at least one side (with the exception of the cloister). The main entrance to the college is a walled passage, called the "Chimney" (derived from the Middle French chemin, for "path" or "way").

Ian White, van Eck Professor of Engineering in the university, has been master of the college since 2011. He was preceded by Robert Mair.

Jesus College has assets of approximately £243m[3] making it Cambridge’s third wealthiest college and one of the richest per head. 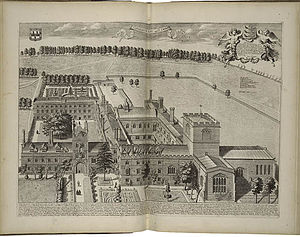 Founded at the beginning of the 12th century, the chapel is the oldest university building in Cambridge still in use.

When founded in 1496, the college consisted of buildings taken over from the Nunnery of St Mary and St Radegund: namely the chapel and the cloister attached to it; the nuns’ refectory, which became the college hall; and the former lodging of the prioress, which became the Master’s Lodge. This set of buildings remains the core of the college to this day and this accounts for its distinctly monastic and non-collegiate character, which sets it apart from other Cambridge colleges. A library was soon added, and the chapel was considerably modified and reduced in scale by Alcock.

The 500th anniversary of the college’s foundation in 1996 saw the completion of the new Quincentenary Library, designed by Eldred Evans and David Shalev, which was shortly followed by a new accommodation building.

Jesus College is one of the few colleges to allow anyone to walk on the lawns of its courts, with the exception of First Court, Cloister Court and those that are burial sites for deceased nuns from the original nunnery. However, in common with other Cambridge colleges, this privilege is only extended during the summer term. 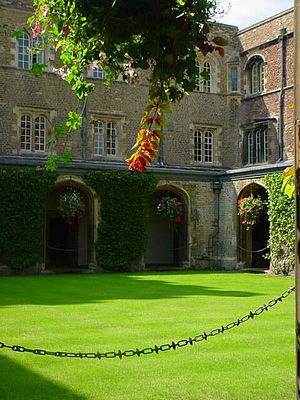 The Cloister in the College grounds 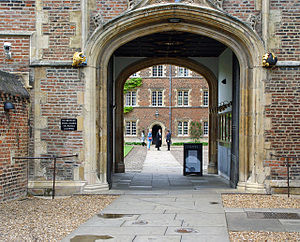 The Gatehouse looking into First Court

Translated into English, the Oratio Ante Cibum reads as follows:

The eyes of all look towards you and trust in you, O God. You give them food in due season. You open your hands and fill every living thing with your blessing. Bless us, O Lord, and all your gifts, which through your great generosity we are about to receive, through Jesus Christ our Lord. God is love. He who abides in love abides in God and God in him. May God be in us and may we abide in him.

The following Oratio Post Cibum is sometimes read after dinner:

Translated into English, the Oratio Post Cibum ["Prayer After Food"[4]] reads as follows:

May the God of peace and love always abide with us; have mercy upon us, O Lord. We thank you for all your mercies, who live and reign, God, for ever and ever. May God preserve the Church, the Queen, the realm, Parliament and peace.

However after a normal formal dinner in Hall the following short responsory is usually used:

The Presiding Fellow: Laus Deo (Praise be to God)
The College: Deo Gratias (Thanks be to God) 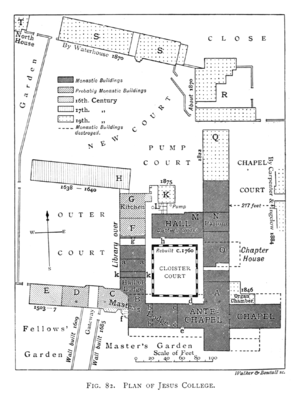 The 500th anniversary of the college’s foundation in 1996 saw the completion of the new Quincentenary Library, designed by Eldred Evans and David Shalev, which was shortly followed by a new accommodation building, completed in 2000.[5] 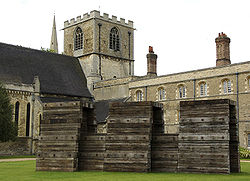 Although Jesus College was not founded until 1496, the chapel and other buildings date from the 12th and 13th centuries. Originally it was the Benedictine Convent of St Mary and St Radegund, which was dissolved by John Alcock, Bishop of Ely. The chapel is believed to be the oldest university building in Cambridge still in use.

The chapel was founded in 1157 and took until 1245 to complete. The original structure was cruciform in shape and the nave had both north and south aisles. A high, pitched roof was surmounted by a belfry and steeple; this collapsed in 1277. The chapel was also used as the parish church of St Radegund. Twice the chapel was ravaged by fire, in 1313 and 1376.

When the college took over the precincts, the parish was renamed after the college as Jesus parish, with the churchyard still being used for burials. This, however, was short lived, as by the middle of the 16th century Jesus parish was absorbed into that of All Saints. 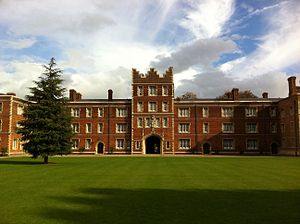 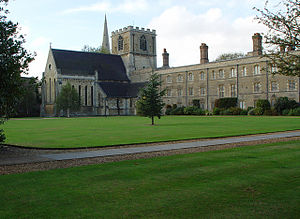 The chapel was much modified, with the western two thirds of the nave being converted into college rooms.

The college maintains two choirs. Mark Williams, former assistant organist at St Paul's Cathedral has been the director of music since September 2009,[6] following the departure of Daniel Hyde to Magdalen College, Oxford, himself replacing Bill Ives.[7]

Malcolm Archer, who is (as of 2012) the Organist and Director of Chapel Music, Winchester College, was Organ scholar at Jesus College in the years from 1972 to 1975.

The misericords were created by Pugin between 1849 and 1853 and used fragments of the misericords dating from 1500, which had been preserved in the Master's Lodge as templates, from then on. 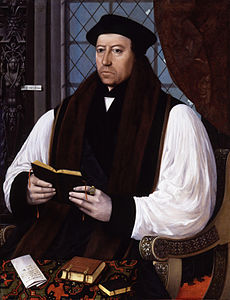 Thomas Cranmer, the first Protestant Archbishop of Canterbury, responsible for the Book of Common Prayer, attended the College from 1503, at the age of fourteen. 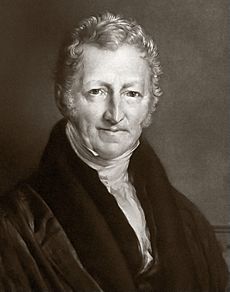 Robert Malthus, British scholar, philosopher, economist and population theorist was admitted to the College in 1784, and elected a Fellow in 1793. 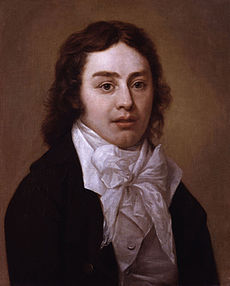 The English poet and Romantic, Samuel Taylor Coleridge, attended the College from 1791 to 1794

Prince Edward, Earl of Wessex, the fourth and youngest child of Queen Elizabeth II and (as of 2015[update]) ninth in line to the throne

Jack Patterson, Grace Chatto and Milan Neil Amin-Smith of the British electronic group Clean Bandit all studied at Jesus as undergraduates, coming together to form the band in 2009.

The American fellows Philip W. Anderson and Eric Maskin won the Nobel Prize in Physics (1977) and Economics (joint - 2007) respectively. Anderson was a fellow from 1969 to 1975 while he held a visiting professorship at the Cavendish Laboratory, and has been an honorary fellow since 1978. Maskin was a research fellow in 1976 to 1977.