A jet aircraft (or simply jet) is an aircraft (nearly always a fixed-wing aircraft) propelled by jet engines (jet propulsion).

Whereas the engines in propeller-powered aircraft generally achieve their maximum efficiency at much lower speeds and altitudes, jet engines and aircraft achieve maximum efficiency (see specific impulse) at speeds close to or even well above the speed of sound. Jet aircraft generally cruise at faster than about M 0.8 (609 mph, 981 km/h or 273 m/s) at altitudes around 10,000–15,000 metres (33,000–49,000 ft) or more.

Frank Whittle, an English inventor and RAF officer, developed the concept of the jet engine in 1928,[1] Hans von Ohain in Germany, a decade later developed the concept independently at the end of the 1930s. He wrote in February 1936 to Ernst Heinkel, telling him of the design and its possibilities. However, it can be argued that the English engineer A. A. Griffith, who published a paper in July 1926 on compressors and turbines, also deserves credit.

Heinkel He 178, the world's first aircraft to fly purely on turbojet power

A number of jet powerplants were suggested from the first instances of powered flight. René Lorin, Morize, Harris proposed systems for creating a jet efflux.[2] In 1910 the Romanian inventor Henri Coandă filed a patent on a jet propulsion system which used piston-engine exhaust gases to add heat to an otherwise pure air stream compressed by rotating fan blades in a duct.

Rocket-powered jet aircraft were pioneered in Germany. The first aircraft to fly under rocket power was the Lippisch Ente, in 1928.[3] The Ente had previously been flown as a glider. The next year, in 1929, the Opel RAK.1 became the first purpose-built rocket plane to fly.

The "turbojet", was invented in the 1930s, independently by Frank Whittle and later Hans von Ohain. The first turbojet aircraft to fly was the Heinkel He 178 V1 first prototype of the German Air Force, the Luftwaffe, on August 27, 1939 in Rostock (Germany).[4]

The first flight of a jet engined aircraft to come to popular attention was the Italian Caproni Campini N.1 motorjet prototype that flew on August 27, 1940.[5] It was the first jet aircraft recognised by the Fédération Aéronautique Internationale (at the time the German He 178 program was still kept secret). Campini had proposed the motorjet in 1932.

The British experimental Gloster E.28/39 first took to the air on May 15, 1941, powered by Sir Frank Whittle's turbojet.[6] The United States produced the Bell XP-59A using two examples of a version of the Whittle engine built by General Electric, which flew on October 1, 1942. The Meteor was the first production jet as it entered production a few months before the Me 262. 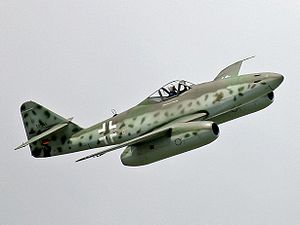 The first operational jet fighter was the Messerschmitt Me 262,[7] made by Germany during late World War II. It was the fastest conventional aircraft of World War II – although the rocket-powered Messerschmitt Me 163 Komet was faster. It had first flown in 1941 but mass production started in 1944 with the first squadrons operational that year, too late for a decisive effect on the outcome of the war. About the same time, mid 1944, the United Kingdom's Gloster Meteor was being committed to defence of the UK against the V-1 flying bomb – itself a pulsejet-powered aircraft  and direct ancestor of the cruise missile– and then ground-attack operations over Europe in the last months of the war. In 1944 Germany introduced into service the Arado Ar 234 jet reconnaissance and bomber, though chiefly used in the former role, with the Heinkel He 162 Spatz single-jet light fighter premiering as 1944 ended. USSR tested its own Bereznyak-Isayev BI-1 in 1942, but the project was scrapped by Joseph Stalin in 1945. The Imperial Japanese Navy also developed jet aircraft in 1945, including the Nakajima J9Y Kikka, a modified, and slightly smaller version of the Me 262 that had folding wings. By the end of 1945, the US had introduced their next jet fighter, the Lockheed P-80 Shooting Star into service and the UK its second fighter design, the de Havilland Vampire.

The US introduced the North American B-45 Tornado, their first jet bomber, into service in 1948. Although capable of carrying nuclear weapons it was used for reconnaissance over Korea.

On November 8, 1950, during the Korean War, United States Air Force Lt. Russell J. Brown, flying in an F-80, intercepted two North Korean MiG-15s near the Yalu River and shot them down in the first jet-to-jet dogfight in history.

The UK put the English Electric Canberra into service in 1951 as a light bomber. It was designed to fly higher and faster than any interceptor. 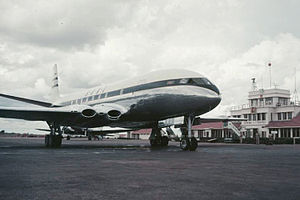 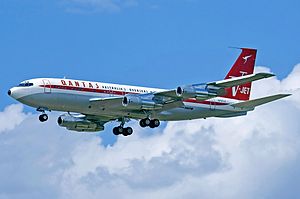 BOAC operated the first commercial jet service, from London to Johannesburg, in 1952 with the de Havilland Comet jetliner. This highly innovative aircraft travelled far faster and higher than the propeller aircraft, was much quieter, smoother, and had stylish blended wings containing hidden jet engines. However, due to a design defect, and use of aluminum alloys, the aircraft suffered catastrophic metal fatigue which lead to several crashes.[8]

The series of crashes gave time for the Boeing 707 to enter service in 1958 and this came to dominate the market for civilian airliners. The underslung engines were found to be advantageous in the advent of a propellant leak, and so the 707 looked rather different from the Comet: the 707 has a shape that is closer to modern aircraft.

Turbofan aircraft began entering service in the 1950s and 1960s, bringing far greater fuel efficiency, and this is the type of jet in widespread use today.

Most people use the term 'jet aircraft' to denote gas turbine based airbreathing jet engines, but rockets and scramjets are both also propelled by jet propulsion.

Cruise missiles are single-use unmanned jet aircraft, powered predominately by ramjets or turbojets or sometimes turbofans, but they will often have a rocket propulsion system for initial propulsion.

The fastest airbreathing jet aircraft is the unmanned X-43 scramjet at around Mach 9–10.

The Space Shuttle, while far faster than the X-43 or X-15, was not regarded as an aircraft during ascent as it was carried ballistically by rocket thrust, rather than the air. During re-entry it was classed (like a glider) as an unpowered aircraft. The first flight was in 1981. 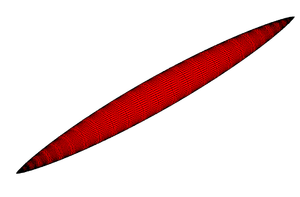 Because of the way they work, the typical exhaust speed of jet engines is transonic or faster, therefore most jet aircraft need to fly at high speeds, either supersonic or speeds just below the speed of sound ("transonic") so as to achieve efficient flight. Aerodynamics is therefore an important consideration.

Jet aircraft are usually designed using the Whitcomb area rule, which says that the total area of cross-section of the aircraft at any point along the aircraft from the nose must be approximately the same as that of a Sears-Haack body. A shape with that property minimises the production of shockwaves which would waste energy.

The different types are used for different purposes.

Rockets are the oldest type and are mainly used when extremely high speeds or extremely high altitudes are needed. Due to the extreme, typically hypersonic, exhaust velocity and the necessity of oxidiser being carried on board, they consume propellant extremely quickly. For this reason, they are not practical for routine transportation.

Turbojets are the second oldest type; it has a high, usually supersonic, exhaust speed and low frontal cross-section, and so is best suited to high-speed, usually supersonic, flight. Although once widely used, they are relatively inefficient compared to turboprop and turbofans for subsonic flight. The last major aircraft to use turbojets were Concorde and Tu-144 supersonic transports.

is the efficiency, in percent, with which the energy contained in a vehicle's propellant is converted into useful energy, to replace losses due to air drag, gravity, and acceleration. It can also be stated as the proportion of the mechanical energy actually used to propel the aircraft. It is always less than 100% because of kinetic energy loss to the exhaust, and less-than-ideal efficiency of the propulsive mechanism, whether a propeller, a jet exhaust, or a fan. In addition, propulsive efficiency is greatly dependent on air density and airspeed.

Mathematically, it is represented as

is the cycle efficiency and

is the propulsive efficiency. The cycle efficiency, in percent, is the proportion of energy that can be derived from the energy source that is converted to mechanical energy by the engine. 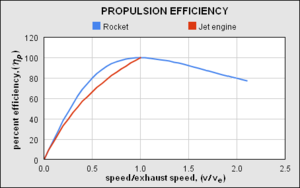 Dependence of the propulsive efficiency (

For jet aircraft the propulsive efficiency (essentially energy efficiency) is highest when the engine emits an exhaust jet at a speed that is the same as, or nearly the same as, the vehicle velocity. The exact formula for air-breathing engines as given in the literature,[10][11] is

where c is the exhaust speed, and v is the speed of the aircraft.

For a long range jet operating in the stratosphere, the speed of sound is constant, hence flying at fixed angle of attack and constant Mach number causes the aircraft to climb, without changing the value of the local speed of sound. In this case:

is the cruise Mach number and

the local speed of sound. The range equation can be shown to be:

which is known as the Breguet range equation after the French aviation pioneer Louis Charles Breguet.