Jewish American Heritage Month (JAHM) is an annual recognition and celebration of Jewish American achievements in and contributions to the United States of America. It is observed annually in the U.S. during the month of May.[1]

JAHM was set into law by President George W. Bush in 2006, according to the Jewish American Heritage Month Coalition. This is the achievement of Rep. Debbie Wasserman Schultz (D-FL) and Sen. Arlen Specter (D-PA), as well as the Jewish Museum of Florida and the South Florida Jewish Community.[2] A similar month exists in Florida as Florida Jewish History Month but it occurs in January.[3]

Rep. Debbie Wasserman Schultz (D-FL) and Sen. Arlen Specter (D-PA) urged the president to proclaim a month that would recognize the more than 350-year history of Jewish contributions to America and the American culture. The resolutions were passed unanimously, first in the United States House of Representatives in December 2005 and later in the United States Senate in February 2006.[4]

According to Library of Congress hosted website, JewishHeritageMonth.gov, May was chosen as the month of Jewish American Heritage Month because of the successful 350th Anniversary Celebration of Jews in America.[6] 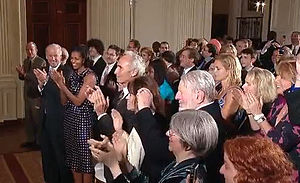 Celebration of Jewish American Heritage Month is encouraged on a national level. In some schools, assemblies have been held in celebration.

JAHM has been recognized in Madison Square Garden in New York City. It has also been recognized in some Jewish museums. Additionally, some institutions, including the Library of Congress, have included shorter periods within the month for special lectures, programs, or displays, such as the Library of Congress "Jewish Heritage Week" lecture series.

President Barack Obama and First Lady Michelle Obama will host the first ever White House reception in honor of Jewish American Heritage Month. The reception serves as an opportunity to highlight and celebrate the range and depth of Jewish American heritage and contributions to American culture, with guests representing the many walks of life that have helped weave the fabric of American history. Invitees include a range of community leaders and prominent Jewish Americans from Olympians and professional athletes to members of Congress, business leaders, scholars, military veterans, and astronauts.

At the May 27, 2010, reception, President Obama welcomed the invited guests, which included "members of the House and Senate, two justices of the Supreme Court, Olympic athletes, entrepreneurs, Rabbinical scholars", and he made special mention of Sandy Koufax, famous in the Jewish community for refusing to play baseball on Yom Kippur. He praised "the diversity of talents and accomplishments" that the Jewish community had brought to the United States since pre-Revolutionary times, saying that, "Even before we were a nation, we were a sanctuary for Jews seeking to live without the specter of violence or exile," from the time "a band of 23 Jewish refugees to a place called New Amsterdam more than 350 years ago."[7][8]

President Obama scheduled a second White House reception in honor of JAHM for May 17, 2011.[9] The Jewish Telegraphic Agency (JTA) reported that it was "less formal than the inaugural one last year, with brief remarks and a small Marine Corps band playing klezmer music."[10] The President noted the presence, among others, of Nobel Peace Prize Laureate Elie Wiesel, and Representative Debbie Wasserman Schultz, newly appointed as Chair of the Democratic National Committee.[10]

In his remarks, President Obama noted that Jewish Americans "persevered despite unspeakable discrimination and adversity at times."[11] Despite the challenges these American Jews faced, the President noted their achievements in "the arts, science, the military, business and industry, and in public and community service."[11] In his remarks, he said:

"This month is a chance for Americans of every faith to appreciate the contributions of the Jewish people throughout our history –- often in the face of unspeakable discrimination and adversity. For hundreds of years, Jewish Americans have fought heroically in battle and inspired us to pursue peace. They’ve built our cities, cured our sick. They’ve paved the way in the sciences and the law, in our politics and in the arts. They remain our leaders, our teachers, our neighbors and our friends.
Not bad for a band of believers who have been tested from the moment that they came together and professed their faith. The Jewish people have always persevered. And that’s why today is about celebrating the people in this room, the thousands who came before, the generations who will shape the future of our country and the future of the world."[12]

In addition, a Marine Corps band playing klezmer music, and the "Maccabeats," a Yeshiva University a cappella group, provided entertainment.[10]

In addition to signing the proclamation marking May 2015 as the annual Jewish American Heritage Month, the White House shared plans for an address by President Obama on May 22, 2015 at Adas Israel Congregation, a large Washington, D.C. synagogue.[13] The date of the visit coincides with “Solidarity Sabbath,” a Lantos Foundation for Human Rights and Justice initiative asking world leaders to show support for the fight against anti-semitism.[13]