From Infogalactic: the planetary knowledge core
(Redirected from Jezebel (Bible))
Jump to: navigation, search
"Jezabel" redirects here. For the band, see The Jezabels. For the website, see Jezebel (website).
For other uses, see Jezebel (disambiguation).

Jezebel is described in the Book of Kings (1 Kings 16:31) as a queen who was the daughter of Ithobaal I of Sidon and the wife of Ahab, King of Israel.[2]

According to the Books of Kings in the Hebrew Bible, Jezebel incited her husband King Ahab to abandon the worship of Yahweh and encourage worship of the deities Baal and Asherah instead. Jezebel persecuted the prophets of Yahweh, and fabricated evidence of blasphemy against an innocent landowner who refused to sell his property to King Ahab, causing the landowner to be put to death. For these transgressions against the God and people of Israel, Jezebel met a gruesome death—thrown out of a window by members of her own court retinue, and the flesh of her corpse eaten by stray dogs.

In the biblical story, Jezebel became associated with false prophets. In some interpretations, her dressing in finery and putting on makeup[3] led to the association of the use of cosmetics with "painted women" or prostitutes.

Jezebel is the Anglicized transliteration of the Hebrew אִיזָבֶל ('Izevel/'Izavel). The Oxford Guide to People & Places of the Bible states that the name is "best understood as meaning 'Where is the Prince?'", a ritual cry from worship ceremonies in honor of Baal during periods of the year when the god was considered to be in the underworld.[4] 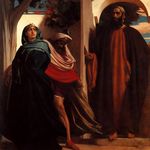 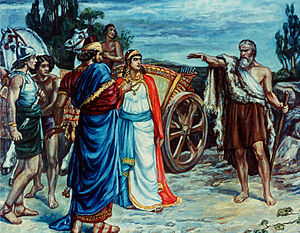 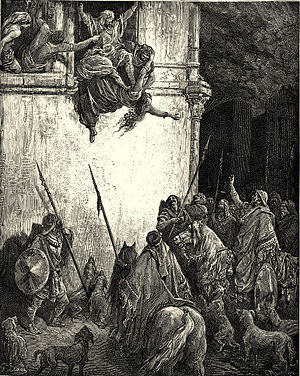 The Death of Jezebel, by Gustave Doré 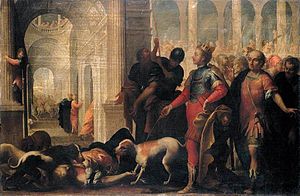 Queen Jezebel Being Punished by Jehu, by Andrea Celesti

Jezebel's story is told in the Books of Kings. She was a Phoenician princess, the daughter of Ethbaal, king of Tyre (1 Kings 16:31 says she was "Sidonian", which is a biblical term for Phoenicians in general).[4] According to genealogies given in Josephus and other classical sources, she was the great-aunt of Dido, Queen of Carthage.[4] Jezebel married King Ahab of the Northern Kingdom (i.e. Israel during the time when ancient Israel was divided into Israel in the north and Judah in the south). Ahab was the son of King Omri, who had brought the northern Kingdom of Israel to great power, established Samaria as his capital, and whose historical existence is confirmed by ancient inscriptions on the Mesha Stele and the Black Obelisk of Shalmaneser III.[5]

This marriage was the culmination of the friendly relations existing between Israel and Phoenicia during Omri's reign, and possibly cemented important political designs of Ahab. Jezebel, like the foreign wives of Solomon, required facilities for carrying on her form of worship, so Ahab made an altar for Baal in the house of Baal, which he had built in Samaria.[6]

Jezebel went so far as to require that her religion should be the national religion of Israel. She organized and maintained guilds of prophets, 450 of Baal, and 400 of Asherah. She also destroyed such prophets of Israel as she could reach. Obadiah, the faithful overseer of Ahab's house, rescued one hundred of these, hid them, and secretly fed them in a cave.[6] Bromiley points out that it was Phoenician practice to install a royal woman as a priestess of Astarte. As such she would have a more active role in temple and palace relations than was customary in the Hebrew monarchy.[7]

The prophet Elijah confronted Ahab and charged him with the sin of following Baal. Ahab had two altars set up at Carmel, one dedicated to Baal, one to Yahweh, and a bull sacrificed upon each altar. The supporters of Baal called upon their god to send fire to consume the sacrifice, but nothing happened. When Elijah called on Yahweh, fire came down from heaven immediately and consumed the offering. Elijah ordered the people to seize the prophets of Baal and Asherah, and they were all slaughtered. The superiority of Elijah and of his God in the test at Carmel, and the slaughter of the 450 prophets of Baal and 400 prophets of Asherah, fired the vengeance of Jezebel. Elijah fled for his life to the wilderness, where he mourned the devotion of Israel to Baal and the lack of worshipers of Israel's God.[6]

Naboth owned a vineyard near the royal palace in the city of Jezreel. Wishing to acquire Naboth's vineyard so that he could expand his own gardens, Ahab offered to purchase Naboth's vineyard or to give him a better one in exchange, but Naboth refused, saying he could not part with ancestral land. When Jezebel saw that her husband was depressed by this, she arranged for the elders to falsely accuse Naboth of blasphemy and stone him to death. When Ahab took possession of Naboth's vineyard, he was again confronted by Elijah, who prophesied that, owing to the way Ahab and Jezebel had plotted to have Naboth killed, Ahab would die, his royal line would be obliterated, and Jezebel would be eaten by dogs.[8]

Three years later, Ahab died in battle. His son Ahaziah inherited the throne, but died as the result of an accident and Ahaziah was succeeded by his brother, Joram. Elisha, Elijah's successor, commanded one of his disciples to anoint Jehu, commander of Joram's army, as king, in order that he might destroy Ahab's descendants as a punishment for the way Jezebel had treated God's prophets and his people.[4] Jehu killed Joram and next went to the royal palace at Jezreel, where Jezebel was the last formal obstacle to his kingship.

Knowing that he was coming, Jezebel put on make-up and a formal wig with adornments and looked out a window. Bromiley says that it should be looked at less as an attempt at seduction than the public appearance of the queen mother, invested with the authority of the royal house and cult, confronting a rebellious commander.[7] In his two-volume Guide to the Bible (1967 and 1969), Isaac Asimov describes Jezebel's last act: dressing in all her finery, make-up, and jewelry, as deliberately symbolic, indicating her dignity, royal status, and determination to go out of this life as a queen.[9]

Jehu ordered Jezebel's servants to throw her from the window. Her blood splashed on the wall and horses, and Jehu's horse trampled her corpse. He entered the palace where, after he ate and drank, he ordered Jezebel's body to be taken for burial. His servants discovered only her skull, her feet, and the palms of her hands—her flesh had been eaten by stray dogs, just as the prophet Elijah had prophesied.[10] Edwin R. Thiele dates Jezebel's death around 850 BC.[11]

According to Israel Finkelstein, the marriage of King Ahab to the daughter of the ruler of the Phoenician empire was a sign of the power and prestige of Ahab and the northern Kingdom of Israel. He termed it a "brilliant stroke of international diplomacy."[5] He says that the inconsistencies and anachronisms in the biblical stories of Jezebel and Ahab mean that they must be considered "more of a historical novel than an accurate historical chronicle."[5] Among these inconsistencies, 1 Kings 20 states that "Ben-Hadad king of Aram" invaded Samaria during Ahab's reign, but this event did not take place until later in the history of Israel.[12] The two books of Kings are part of the Deuteronomistic history, compiled more than two hundred years after the death of Jezebel. Finkelstein notes that these accounts are "obviously influenced by the theology of the seventh century BCE writers".[5] The compilers of the biblical accounts of Jezebel and her family were writing in the southern kingdom of Judah centuries after the events from a perspective of strict monolatry. These writers considered the polytheism of the members of the Omride dynasty to be sinful. In addition, they were hostile to the northern kingdom and its history, as its center of Samaria was a rival to Jerusalem.[5]

However, other scholars such as Dr J Bimson, of Trinity College, Bristol, argue that 1 and 2 Kings are not "a straightforward history but a history which contains its own theological commentary". He points to verses like 1 Kings 14:19 that show the author of Kings was drawing on other earlier sources.[13]

A seal from the 9th century BCE, discovered in 1964, has a partially damaged inscription of "YZBL" which could have once read, "belonging to Jezebel". However, there are some issues with this theory. Whereas on the seal it appears the inscription begins with the letter yodh, Jezebel's name starts with an aleph, which is lacking on the seal; furthermore, the possessive lamedh which would translate to the prerequisite "belonging to (…)" is also missing from the seal. However, it's entirely possible these letters simply could have been located where the seal is damaged. Regardless, scholars do not agree on whether the seal is evidence for historicity of the biblical character. Some scholars have also said that the size and intricacy of the seal could mean it was used by royalty.[14]

According to Geoffrey Bromiley, the depiction of Jezebel as "the incarnation of Canaanite cultic and political practices, detested by Israelite prophets and loyalists, has given her a literary life far beyond the existence of a ninth-century Tyrian princess."[7]

Through the centuries, the name Jezebel came to be associated with false prophets. By the early 20th century, it was also associated with fallen or abandoned women.[15] In Christian lore, a comparison to Jezebel suggested that a person was a pagan or an apostate masquerading as a servant of God. By manipulation and/or seduction, she misled the saints of God into sins of idolatry and sexual immorality.[16] In particular, Christians associated Jezebel with promiscuity. In the Medieval period, the chronicler Matthew Paris criticised the wife of King John, Isabella of Angouleme, by claiming that she was 'more Jezebel than Isabel.'[17] In modern usage, the name of Jezebel is sometimes used as a synonym for sexually promiscuous and/or controlling women,[18] especially as a racist stereotype of Black women, the Jezebel stereotype.[19] 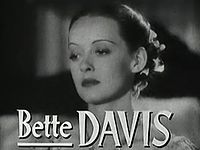 Bette Davis as Julie in the film Jezebel