Jiāngxī; Wade–Giles: Chiang1-hsi1; Gan: Kongsi) is a province in the People's Republic of China, located in the southeast of the country. Spanning from the banks of the Yangtze river in the north into hillier areas in the south and east, it shares a border with Anhui to the north, Zhejiang to the northeast, Fujian to the east, Guangdong to the south, Hunan to the west, and Hubei to the northwest.[3]

The name "Jiangxi" derives from the circuit administrated under the Tang dynasty in 733, Jiangnanxidao (江南西道, Circuit of Western Jiangnan; Gan: Kongnomsitau).[4] The short name for Jiangxi is 赣 (pinyin: Gàn; Gan: Gōm), for the Gan River which runs across from the south to the north and flows into the Yangtze River. Jiangxi is also alternately called Ganpo Dadi (贛鄱大地) which literally means the "Great Land of Gan and Po".

Jiangxi is centered on the Gan River valley, which historically provided the main north-south transport route of south China. The corridor along the Gan River is one of the few easily traveled routes through the otherwise mountainous and rugged terrain of the south-eastern mountains. This open corridor was the primary route for trade and communication between the North China Plain and the Yangtze River valley in the north and the territory of modern Guangdong province in the south. As a result, Jiangxi has been strategically important throughout much of China's history.

Jiangxi was outside the sphere of influence of early Chinese civilization during the Shang dynasty (16th to 11th centuries BC). It is likely that peoples collectively known as the Baiyue inhabited the region. During the Spring and Autumn period, the northern part of modern Jiangxi formed the western frontier of the state of Wu. After Wu was conquered by the state of Yue (a power based in modern northern Zhejiang) in 473 BC, the state of Chu (based in modern Hubei) took over northern Jiangxi and there may have been some Yue influence in the south. Chu subjugated Yue in 333 BC. In 223 BC, when Qin conquered Chu, majority of Jiangxi area was recorded to be put under Jiujiang Commandary situated in Shouchun (壽春).[5] However the commandary was ineffective and ended shortly when Qin falls.

Yuzhang Commandery (豫章, Gan: Ì-zong) was established in Jiangxi at the beginning of the Han dynasty, possibly before the death of Xiang Yu in 202 BC, and it's also the very first commandery set up by Chinese dynasty in Jiangxi. It was named after the Yuzhang River (豫章江, Gan: Ì-zong Kong), the original name of Gan River. "Gan" has become the abbreviation of the province. In 201, eight counties were added to the original seven of Qin[citation needed], and three more were established in later years. Throughout most of the Han dynasty the commandery's eighteen counties covered most of the modern province of Jiangxi. The county seats of Nanchang, Gan, Yudu, Luling among others were located at the sites of modern major cities. Other counties, however, have been moved or abolished in later centuries.

Under the reign of Emperor Wu of the Han dynasty, Yuzhang Commandery was assigned to Yangzhou Province, as part of a trend to establish provinces (zhou) all across China. In 291 AD, during the Western Jin dynasty, Jiangxi became its own Zhou called Jiangzhou (江州, Gan: Kong-chiu). During the Southern and Northern Dynasties, Jiangxi was under the control of the southern dynasties, and the number of zhou slowly grew.

During the Sui dynasty, there were seven commanderies and twenty-four counties in Jiangxi. During the Tang dynasty, another commandery and fourteen counties were added. Commanderies were then abolished, becoming zhou (henceforth translated as "prefectures" rather than "provinces").

Circuits were established during the Tang dynasty as a new top-level administrative division. At first Jiangxi was part of the Jiangnan Circuit (lit. "Circuit south of the Yangtze"). In 733, this circuit was divided into western and eastern halves. Jiangxi was found in the western half, which was called Jiangnanxi Circuit (lit. "Western circuits south of the Yangtze"). This is the source of the modern name "Jiangxi".

The Tang dynasty collapsed in 907, heralding the division of the Five Dynasties and Ten Kingdoms period. Jiangxi first belonged to Wu (吳, Gan: Ng), then to Southern Tang (南唐, Gan: Nām-thóng). Both states were based in modern-day Nanjing, further down the Yangtze River.

During the Song dynasty, Jiangnanxi Circuit was reestablished with nine prefectures and four army districts (with sixty-eight districts).

During the Yuan dynasty, the circuit was divided into thirteen different circuits, and Jiangxi Province was established for the first time. This province also included the majority of modern Guangdong. Jiangxi acquired (more or less) its modern borders during the Ming dynasty after Guangdong was separated out. There has been little change to the borders of Jiangxi since.

After the fall of the Qing dynasty, Jiangxi became one of the earliest bases for the Communists and many peasants were recruited to join the growing people's revolution. The Nanchang Uprising took place in Jiangxi on August 1, 1927, during the Chinese Civil War. Later the Communist leadership hid in the mountains of southern and western Jiangxi, hiding from the Kuomindang's attempts to eradicate them. In 1931, the Chinese Soviet Republic's government was established in Ruijin, which is sometimes called the "Former Red Capital" (红色故都, Gan: Fūng-set Kū-tu), or just the "Red Capital". In 1935, after complete encirclement by the Nationalist forces, the Communists broke through and began the Long March to Yan'an. 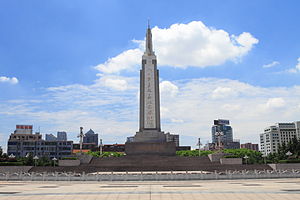 The Gan River dominates the province, flowing through the entire length of the province from south to north. It enters Lake Poyang in the north, the largest freshwater lake of China; that lake in turn empties into the Yangtze River, which forms part of the northern border of Jiangxi. Important reservoirs include the Xiushui Tuolin Reservoir in the northwest of the province on the Xiushui River, and the Wan'an Reservoir(zh) in the upper section of the Gan.

Nanchang, the provincial capital and the most densely populated city, is one of the largest Chinese metropolises. Nanchang is the hub of Jiangxi civilization throughout its history, which plays a leading role in the commercial, intellectual and industrial and political fields.[6] While Ganzhou is the largest subdivision of Jiangxi.

Main articles: Politics of Jiangxi and List of provincial leaders of the People's Republic of China

The Politics of Jiangxi is structured in a dual party-government system like all other governing institutions in mainland China.

The Governor of Jiangxi is the highest-ranking official in the People's Government of Jiangxi. However, in the province's dual party-government governing system, the Governor has less power than the Jiangxi Communist Party of China Provincial Committee Secretary, colloquially termed the "Jiangxi CPC Party Chief".

Rice is the dominant crop in Jiangxi. Cash crops commonly grown include cotton and rapeseed. Jiangxi is the leading producer of kumquats in China, particularly Suichuan County.[11]

Jiangxi is rich in mineral resources, leading the provinces of China in deposits of copper, tungsten, gold, silver, uranium, thorium, tantalum, niobium, among others. Noted centers of mining include Dexing (copper) and Dayu County (tungsten).

Jiangxi is a rather poor province when compared to its neighboring provinces. It is located in extreme proximity to some of the richest provinces of China (Guangdong, Zhejiang, Fujian), which are sometimes blamed for taking away talent and capital from Jiangxi.[12]

Nanchang National Export Expressing Zone is located in NanChang Hi-Tech Industrial Development Zone, it was approved by the State Council on May 8, 2006, and passed the national acceptance inspection on Sep 7th, 2007. It has a planning area of 1 km2 and now has built 0.31 km2. It enjoys simple and convenient customs clearances,and special preferential policies both for Nanchang National Export Expressing Zone and NCHDZ.[13]

Nanchang National High-tech Industrial Development Zone (NCHDZ for short hereafter) is the only national grade high-tech zoned in Jiangxi, it was established in Mar. 1991. The zone covers an area of 231 km2 (89 sq mi), in which 32 km2 (12 sq mi) have been completed. NCHDZ possesses unique nature condition and sound industry foundation of accepting electronics industry. NCHDZ has brought 25% industrial added value and 50% industrial benefit and tax to Nanchang city by using only 0.4% land area.[14] 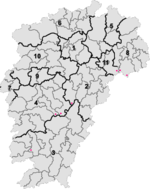 She ethnic townships in Jiangxi

The population of Jiangxi is approximately 39.66 million.[16] 99.73% of that is Han Chinese, predominantly Gan and Hakka. Ganzhou, Jiangxi's largest city, has an especially large number of Hakka. Ethnic minorities include Hui and Zhuang.

Jiangxi and Henan both have the most unbalanced gender ratios of all Chinese provinces. Based on a 2009 British Medical Journal study, the ratio is over 140 boys for every 100 girls in the 1-4 age group.[17]

The predominant religions in Jiangxi are Chinese folk religions, Taoist traditions and Chinese Buddhism. According to surveys conducted in 2007 and 2009, 24.05% of the population believes and is involved in cults of ancestors, while 2.31% of the population identifies as Christian.[18]

The reports didn't give figures for other types of religion; 73.64% of the population may be either irreligious or involved in worship of nature deities, Buddhism, Confucianism, Taoism, folk religious sects.

Altar of Shangdi and Doumu at the Chengxu Temple (Taoist) in Zhouzhuang. 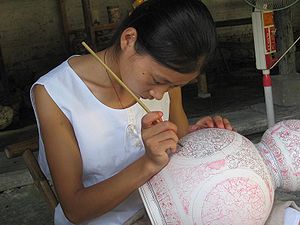 Jiangxi is the main area of concentration of the Gan varieties of Chinese, spoken over most of the northern two-thirds of the province. Examples include the Nanchang dialect, Yichun dialect and Ji'an dialect. The southern one-third of the province speaks Hakka. There are also Mandarin, Huizhou, and Wu dialects spoken along the northern border.

Ganju (Jiangxi opera) is the type of Chinese opera performed in Jiangxi.

Although little known outside of the province, Jiangxi cuisine is rich and distinctive. Flavors are some of the strongest in China, with heavy use of chili peppers and especially pickled and fermented products.

Jingdezhen is widely regarded as the producer of the best porcelain in China.

Jiangxi also was a historical center of Chan Buddhism.

Prominent examples of Hakka architecture can be found in Jiangxi.

As of January 2015, Jiangxi had two Yangtze River crossings, both in Jiujiang.

The Beijing–Kowloon Railway and Shanghai–Kunming Railway crisscross the province and intersect at Nanchang, which also has a high-speed rail link to Jiujiang. In addition, Jiangxi is connected by rail to Anhui Province via the Anhui–Jiangxi and Tongling–Jiujiang Railways; to Hubei via the Wuhan–Jiujiang Railway; and to Fujian via the Yingtan–Xiamen, Hengfeng–Nanping, Ganzhou–Longyan and Xiangtang–Putian Railways. 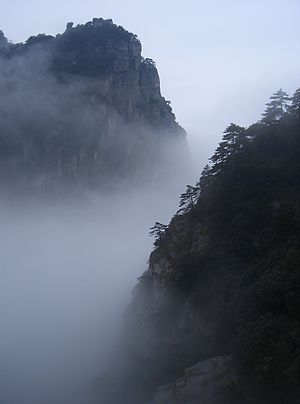 Near the northern port city of Jiujiang lies the well-known resort area of Mount Lu. Also near the city are the Donglin (East Wood) Temple and the Tiefo (Iron Buddha) Temple (铁佛寺), two important Buddhist temples.

Near the small city of Yingtan is the resort area of Longhushan, which purports to be the birthplace of Taoism and hence has great symbolic value to Taoists. The region has many temples, cave complexes, mountains and villages.

The Lushan National Park has been a UNESCO World Heritage Site since 1996.

In 2007, Jiangxi (specifically the Zhelin Reservoir, about 40 kilometres (25 mi) from Nanchang) was the filming location for the fifteenth series of the American TV show Survivor.

The mountainous terrain and large forest coverage of Jiangxi has made it historically one of the more wild places of central China. South China tigers have been seen as recently as fifteen or twenty years ago and projects are underway to document evidence of existing tigers, if there are any. Several mountain areas along the northern border with Hunan and Hubei are potential sites for "wilderness" preserves specifically for protecting or even reintroducing tigers.

Other wildlife, though not plentiful, are more numerous in Jiangxi than in many other developed areas of China. Numerous species of birds are common, especially around the marshes of Lake Poyang in the north. Though protected, mammals such as muntjac, wild boar, civet cats, and pangolins, are still common enough that they'll even occasionally be seen in markets for sale as game meat, or possibly even in a forest.

The late Paleocene mesonychid, Jiangxia chaotoensis was found in the province, and named after it.

Main article: List of universities and colleges in Jiangxi