From Infogalactic: the planetary knowledge core
Jump to: navigation, search
For other uses, see Jiaozi (disambiguation).

饺子) are a kind of Chinese dumpling, commonly eaten across East Asia. It's one of the major foods eaten during the Chinese New Year and year round in the northern provinces. Though considered part of Chinese cuisine, jiaozi are popular and often eaten in other parts of Asia and in Western countries.

Jiaozi typically consist of a ground meat and/or vegetable filling wrapped into a thinly rolled piece of dough, which is then sealed by pressing the edges together or by crimping.

Pottery dumpling and delicacies from a Tang Dynasty tomb

In China, there are several different folk stories explaining the origin of Jiaozi and its name.

Traditionally, Jiaozi were thought to be invented by Zhang Zhongjing [1] during the Eastern Han,[2][3] who was one of the greatest practitioners of traditional Chinese medicine in history. Jiaozi was originally referred to as "tender ears" (Chinese: 娇耳; pinyin: jiao'er) because it's used to treat frostbitten ears .It was during a winner, when Zhang Zhongjing was on his way home, he found many common people had frostbitten ears, because they didn't have warm clothes and enough food. He wanted to treat those poor people. So Zhang stewed lamb, peppers, and some warming medicines in a big pot, fished those food, and chopped them. After that, he put chopped food in many small dough. He named those "Jiao'er " because he was meant to treat people's frostbitten ears. He boiled them and handed them out with the soup to poor people. He had done handing out for a long time, until the coming of Chinese traditional new year. In order to celebrate new year as well as recovering from frostbitten ears, people imitated Zhang's making" Jiao'er ". Today people don't need " Jiao'er " to treat ears, but they always remember Zhang's kindness.[4]

There are various other theories. It has been suggested that jiaozi may have derived from dumplings in Western Asia, however, sources indicate that similar dumplings were already sold and eaten during and before the Song dynasty. In Western Han dynasty(b.c202-8) (Before Eastern Han) " jiaozi "(饺子) is called "Jiaozi " (角子). In the Three Kingdoms period(220-280), the book Guang Ya (广雅) wrote by Zhang Yi( 张揖), made a record about the jiaozi. Yan Zitui (颜子推) from Northern Qi in Northern dynasty(550-577) also wrote book saying: "Today the jiaozi, shaped like a crescent moon, is a common food in the world." Six Dynasties Turfan tombs contained dumplings.[5][6] Later in Tang Dynasty, jiaozi becomes more popular, called "Bian Shi"( 扁食). Chinese archaeologists have found a bowl of jiaozi in the Tang Dynasty tombs in Turpan.[7] 7th or 8th century old dumplings and wontons were found in Turfan.[8]

It's also said that Jiaozi were so named because they were horn shaped. The Chinese word for "horn" is jiao (Chinese: 角; pinyin: jiǎo), and jiaozi was originally written with the Chinese character for "horn", but later it was replaced by a specific character 餃, which has the food radical on the left and the phonetic component jiāo (交) on the right.[9]

At the same time, Jiaozi looks like the golden ingots yuan bao used during the Ming Dynasty for money and the name sounds like the word for the earliest paper money, so serving them is believed to bring prosperity.[10] Many families eat these at midnight on Chinese New Year's Eve. Some cooks will even hide a clean coin for the lucky to find.[11]

Nowadays, Jiaozi are eaten all year round, and can be eaten at any time of the day – breakfast, lunch or dinner. They can constitute one course, starter or side dish, or the main meal. In China, sometimes Jiaozi is served as a last course during restaurant meals. As a breakfast dish, Jiaozi are prepared alongside Xiaolongbao at inexpensive, roadside restaurants. Typically, they are served in small steamers containing ten pieces each. Although mainly consumed at breakfast, these small restaurants keep them hot on steamers, and ready to eat all day. Jiaozi is always served with a soy sauce-based dipping sauce that may include vinegar, garlic, ginger, rice wine, hot sauce, and sesame oil. 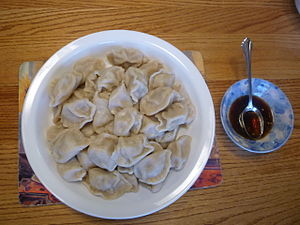 A plate of boiled dumplings (shuijiao) and sauce

Chinese dumplings (jiaozi) may be divided into various types depending on how they are cooked:

Dumplings that use egg rather than dough to wrap the filling are called "egg dumplings" (Chinese: 蛋餃; pinyin: dànjiǎo; literally: "egg dumpling").

As a dish prepared at home, each family has its own preferred method of making them, using favorite fillings, with types and methods of preparation varying widely from region to region.Common dumpling meat fillings include pork, mutton, beef, chicken, fish, and shrimp, which are usually mixed with chopped vegetables. Popular vegetable fillings include napa cabbage, scallion (spring onions), leek, celery and garlic chives.

There are many ways to fold Jiaozi. Basically, steps for folding the skin includes putting a single pleat in the middle, putting multiple pleats along the edge, making a wavy edge like a pie crust, turning a pleated edge in toward the body resulting in a rounded edge, and putting both ends together resulting in a round shape.[12] Different shapes of Jiaozi require different folding techniques, but the most famous and common technique is the pinched-edge fold.[13] Take a wrapper and put one tablespoon of filling into the center of the wrapper. Fold a half of edge to the other half. Use left thumb and forefinger to pinch one side of the half-moon wrapper, and then use right thumb to push the inside skin outward, right forefinger to make outside skin into small pleats. Use right thumb to clench those pleats. Repeat these steps to the other side of the wrapper, and make sure to clench the seal of Jiaozi.[14] This is crescent-shaped Jiaozi, the most popular shape in China.

Gaau ji (traditional Chinese: 餃子; simplified Chinese: 饺子; pinyin: jiǎozi; Cantonese Yale: gáau jí) are standard fare in dim sum. The immediate noted difference to jiaozi is that they are smaller and wrapped in a thinner translucent skin, and usually steamed. The smaller size and the thinner wrapper make the dumplings easier to cook through with steaming. In contrast to jiaozi, gaau ji are rarely home-made because the wrapper, which needs to be thin but tough enough to not break, is more difficult to make. Just like jiaozi, many types of fillings exist, with the most common type being ha gow (simplified Chinese: 虾饺; traditional Chinese: 蝦餃; Cantonese Yale: hā gáau; literally: "shrimp dumplings"), but fillings can include scallop, chicken, tofu, mixed vegetables, and others; dim sum restaurants often feature their own house specials or innovations. Dim sum chefs and artists often use ingredients in new or creative ways, or draw inspiration from other Chinese culinary traditions, such as Chaozhou, Hakka, or Shanghai. More creative chefs may even incorporate a fusion from other cultures, such as Japanese (teriyaki) or Southeast Asian (satay, curry), while upscale restaurants may use expensive or exotic ingredients such as lobster, shark fin and bird's nest. 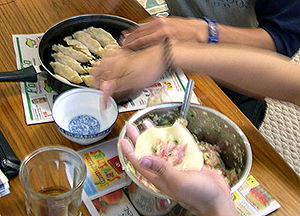 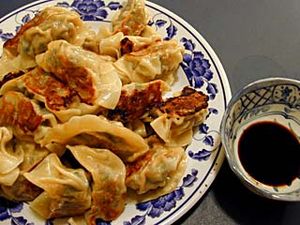 A plate of potstickers (guotie) and dipping sauce

Guotie (simplified Chinese: 锅贴; traditional Chinese: 鍋貼; pinyin: guōtiē; literally: "pot stick") is pan-fried jiaozi, also known as potstickers in North America (a direct character translation), or yaki-gyoza in Japan. They are a Northern Chinese style dumpling popular as a street food, appetizer, or side order in Chinese. This dish is sometimes served on a dim sum menu, but may be offered independently. The filling for this dish usually contains pork (sometimes chicken, or beef in Muslim areas), cabbage (or Chinese cabbage and sometimes spinach), scallions (spring or green onions), ginger, Chinese rice wine or cooking wine, and sesame seed oil.

Guotie are shallow-fried in a wok (Mandarin "guo"). A small quantity of water is added and the wok is covered. While the base of the dumplings is fried, the upper part is steamed and this gives a texture contrast typical of Chinese cuisine.

An alternative method is to steam in a wok and then fry to crispness on one side in a shallow frying pan.

Exactly the same dumpling is boiled in plenty of water to make jiaozi and both are eaten with a dipping sauce or chilli paste.

Three or five folds are made on one side of the round wrapper that is rolled so that the edges are thinner than the middle. This gives the base a large surface area that helps to give the dumpling stability to stand up in the pan.

The Chinese method of preparing the dough is to pour boiling water onto the flour and letting stand for five minutes and then adding a small quantity of cold water. This helps to activate the gluten in the dough.

Other names for guotie:

Guotie is said to date back over four millennia. However, the first mention in literature dates back to the Song Dynasty (960–1280 AD) in ancient China reporting guotie as being exceptionally good for the human soul.

7th or 8th century old dumplings and wontons were found in Turfan.[16] 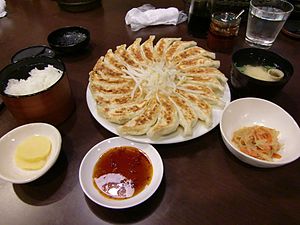 The Japanese word gyōza (ギョーザ, ギョウザ) was derived from the reading of 餃子 in the Shandong Chinese dialect (giaozi) and is written using the same Chinese characters. The selection of characters indicates that the word is of non-Japanese origin.

The most prominent differences between Japanese-style gyōza and Chinese-style jiaozi are the rich garlic flavor, which is less noticeable in the Chinese version, the light seasoning of Japanese gyōza with salt and soy sauce, and the fact that gyōza wrappers are much thinner. Of course, jiaozi vary greatly across regions within China, so these differences are not always substantial. Gyōza are usually served with soy-based tare sauce seasoned with rice vinegar and/or chili oil (rāyu in Japanese, làyóu (辣油) in Mandarin Chinese). The most common recipe is a mixture of minced chicken, cabbage, Asian chives, and sesame oil, and/or garlic, and/or ginger, which is then wrapped into thinly rolled dough skins. In essence, gyōza are similar in shape to pierogi.

Gyōza can be found in supermarkets and restaurants throughout Japan. Pan-fried gyōza are sold as a side dish in many ramen and Chinese restaurants.

The most popular preparation method is the pan-fried style called yaki-gyōza (焼き餃子), in which the dumpling is first fried on one flat side, creating a crispy skin. Then, water is added and the pan sealed with a lid, until the upper part of the dumpling is steamed. Other popular methods include boiled sui-gyōza (水餃子) and deep fried age-gyōza (揚げ餃子).

Store-bought frozen dumplings are often prepared at home by first placing them in a pot of water which is brought to a boil, and then transferring them to a pan with oil to fry the skin.

Jiaozi should not be confused with wonton; jiaozi have a thicker skin and a relatively flatter, more oblate, double-saucer like shape (similar in shape to ravioli), and are usually eaten with a soy-vinegar dipping sauce (and/or hot chili sauce), while wontons have thinner skin and are usually served in broth. The dough for the jiaozi and wonton wrappers also consist of different ingredients.