From Infogalactic: the planetary knowledge core
Jump to: navigation, search
Not to be confused with Jiajing Emperor.

The Jiaqing Emperor (Chinese: 嘉慶帝; pinyin: Jiāqìng Dì; Wade–Giles: Chia1-ch'ing4 Ti4; Mongolian: Sayishiyaltu Yirugertu Khaan, 13 November 1760 – 2 September 1820), personal name Aisin Gioro Yongyan, was the seventh emperor of the Manchu-led Qing dynasty, and the fifth Qing emperor to rule over China from 1796 to 1820. He was the son of the Qianlong Emperor. During his reign, he prosecuted Heshen, the corrupt favourite of his father, and attempted to restore order within the Qing Empire and curb the smuggling of opium into China.

Yongyan was born in the Old Summer Palace, 8 km (5 mi) northwest of the walls of Beijing. His personal name, "Yongyan" (永琰), was later changed to "Yongyan" (顒琰) when he became the emperor. The Chinese character for yong in his name was changed from the more common 永 to the less common 顒. This novelty was introduced by the Qianlong Emperor, who believed that it was not proper to have a commonly used Chinese character in an emperor's personal name due to the longstanding practice of naming taboo in the imperial family.

Yongyan was the 15th son of the Qianlong Emperor. His mother was Noble Consort Ling, the daughter of Wei Qingtai (魏清泰), a Han Chinese official whose family had been long integrated into the Manchu Eight Banners as part of a Han Banner. She was posthumously honoured as "Empress Xiaoyichun" after Yongyan became the emperor. In 1818, the Jiaqing Emperor officially converted his mother's family from Han Chinese to Manchu by transferring them from the Han Banners to the Manchu Banners and changing their family name from "Wei" to the Manchu-sounding "Weigiya". 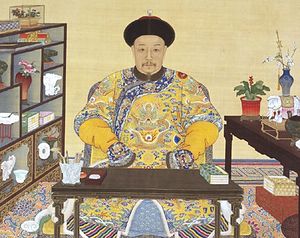 Portrait of the Jiaqing Emperor in his study

In October 1795, the 60th year of his reign, the Qianlong Emperor announced his intention to abdicate in favour of Prince Jia. He made this decision because he felt that it was disrespectful for him to rule longer than his grandfather, the Kangxi Emperor, who was on the throne for 60 years. Prince Jia ascended the throne and adopted the era name "Jiaqing" (Chinese: 嘉慶; Manchu: ᠰᠠᡳᠴᡠᠩᡤᠠ ᡶᡝᠩᡧᡝᠨ saicungga fengšen) in February 1796, hence he is historically known as the Jiaqing Emperor. For the next three years however, the Jiaqing Emperor was emperor in name only because decisions were still made by his father, who became a Taishang Huang (emperor emeritus) after his abdication.

After the death of the Qianlong Emperor in the beginning of February 1799, the Jiaqing Emperor took control of the government and prosecuted Heshen, a favourite official of his father. Heshen was charged with corruption and abuse of power, stripped of his titles, had his property confiscated, and ordered to commit suicide. Heshen's daughter-in-law, Princess Hexiao, a sister of the Jiaqing Emperor, was spared from punishment and given a few properties from Heshen's estates.

At the time, the Qing Empire faced internal disorder, most importantly the large-scale White Lotus (1796–1804) and Miao (1795–1806) rebellions, as well as an empty imperial treasury. The Jiaqing Emperor engaged in the pacification of the empire and the quelling of rebellions. He endeavored to bring China back to its 18th-century prosperity and power. However, due in part to large outflows of silver from the country as payment for the opium smuggled into China from British India, the economy declined.

Members of the Qing imperial family tried to assassinate him twice – in 1803 and in 1813. The princes involved in the attempts on his life were executed. Other members of the imperial family, numbering in the hundreds, were sent into exile.[1][2][3]

The Jiaqing Emperor refused the Vietnamese ruler Gia Long's request to change his country's name to Nam Việt. He changed the name instead to Việt Nam.[4]

The Great Qing Code includes one statute titled "Prohibitions Concerning Sorcerers and Sorceresses" (禁止師巫邪術). In 1811, a clause was added to it with reference to Christianity. It was modified in 1815 and 1817, settled in its final form in 1839 under the Daoguang Emperor, and abrogated in 1870 under the Tongzhi Emperor. It sentenced Europeans to death for spreading Catholicism among Han Chinese and Manchus. Christians who would not repent their conversion were sent to Muslim cities in Xinjiang, to be given as slaves to Muslim leaders and beys.[5]

Per imperial regulations, there was only one Empress at any given time. However, that did not prevent others from being elevated to that position after the death of an existing empress. During the Jiaqing Emperor's reign, there were two empresses, each serving in different periods of time:

Per imperial regulations, only two Imperial Noble Consorts are allowed at any given time.[citation needed]

Per imperial regulations, only four Consorts are allowed at any given time. Not counting those who were later elevated to higher titles and those who were elevated posthumously, there was effectively only two consorts during the Jiaqing era.

Per imperial regulations, only six Imperial Concubines are allowed at any given time.

On 2 September 1820, the Jiaqing Emperor died at the Rehe (Jehol) Traveling Palace (熱河行宫), 230 km (140 mi) northeast of Beijing, where the imperial court was in summer quarters. The Draft History of Qing did not record a cause of death. Some have alleged that he died after being struck by lightning, but others prefer the theory that he died of a stroke as the emperor was quite obese. He was succeeded by his second son, Mianning, who became known as the Daoguang Emperor.