From Infogalactic: the planetary knowledge core
Jump to: navigation, search
For other uses, see Jib (disambiguation).

A jib is a triangular staysail that sets ahead of the foremast of a sailing vessel. Its tack is fixed to the bowsprit, to the bow, or to the deck between the bowsprit and the foremost mast. Jibs and spinnakers are the two main types of headsails on a modern boat.

A jib, left, compared to a genoa, right. The foretriangle is outlined in red.

Boats may be sailed using a jib alone, more commonly jib(s) make a minor direct contribution to propulsion, compared to a main sail. Generally, a jib's most crucial function is as an airfoil, increasing performance and overall stability by reducing turbulence on the main sail's leeward side.[citation needed]

On boats with only one jib, it is common for the clew of the jib to be further aft than the mast, meaning the jib and mainsail overlap. An overlapping jib is called a genoa jib or simply a genoa (see illustration). These are efficiently used when reaching more broadly than a close reach. Alternatively, a boat may carry smaller jibs, to compensate aerodynamics when the main sail is reefed; these more rugged sails are called storm jibs or spitfires.

On cruising yachts with more than one jib, it is common for the innermost jib to be self-tacking, either by using a boom along the foot of the sail, or by cleating the jib sheet to a track, or both. On other cruising yachts, and nearly all racing sailboats, the jib needs to be worked when tacking. On these yachts, there are two sheets attached to the clew of the jib. As the yacht comes head to wind during a tack, the active sheet is released, and the other sheet (the lazy sheet) on the other side of the boat is pulled in. This sheet becomes the new active sheet until the next tack. 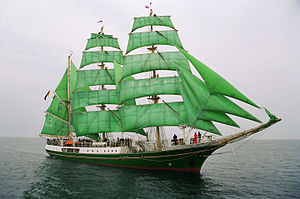 The barque Alexander von Humboldt, with four jibs set and a fifth furled on the bowsprit

Schooners typically have up to three jibs. The foremost one sets on the topmast forestay and is generally called the jib topsail, a second on the main forestay is called the jib, and the innermost is called the staysail. Actually, all three sails are both jibs and staysails in the generic sense.

Original usage in 18th and 19th century square-rigged ships distinguished between the fore staysail, set on the forestay running from the foremast head to the ship's peak, the foremost part of the hull, and the jibs set on stays running to the bowsprit. Jibs, but not staysails, could also be "set flying," i.e. not attached to the standing rigging. Sails set beyond the peak were typically called jibs, set on stays running from the fore topmast to the bowsprit, or the fore topgallant mast to the jibboom or even the fore royal mast to the flying jibboom. A large square-rigged ship typically has four jibs, but could have as many as six.[1][2]

From forward to aft, these sails are called:

The first two were rarely used except by clipper ships in light winds and were usually set flying.[1][2] A storm jib was a small jib of heavy canvas set to a stay to help to control the ship in bad weather.[1]