James Michael Furyk (born May 12, 1970) is an American professional golfer who plays on the PGA Tour. In 2010 he was the FedEx Cup champion and PGA Tour Player of the Year.[1] He has won one major championship, the 2003 U.S. Open.

Furyk was born in West Chester, Pennsylvania. His father, Mike, was an assistant pro at the Edgmont Country Club and later also spent time as a pro at West Chester Golf and Country Club as well as Hidden Springs Golf Course in Horsham. His early years were spent in the Pittsburgh suburbs learning the game from his father, who was head pro at Uniontown Country Club.[citation needed]

He graduated from Manheim Township High School in Lancaster County in 1988, where he played basketball in addition to being a state champion golfer. He played his junior golf at Meadia Heights Golf Club just south of Lancaster city. He played college golf at the University of Arizona in Tucson, where he was an All-American twice, and led the Wildcats to their first (and only) NCAA title in 1992.[5] 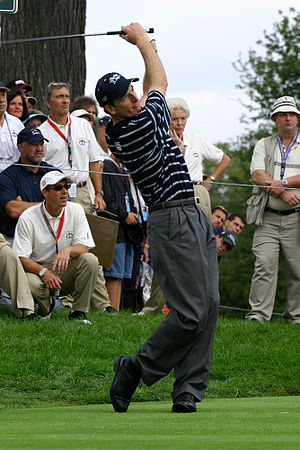 Furyk turned professional in 1992. He won the Nike Mississippi Gulf Coast Classic on the Nike Tour in 1993. He joined the PGA Tour in 1994 and won at least one tournament each year between 1998 and 2003. At the time, this was the second-best streak of winning seasons behind Tiger Woods and he made the top ten in the Official World Golf Ranking. Furyk's biggest win to date came on June 16, 2003, when he tied the record for the lowest 72-hole score in U.S. Open history to win his first major championship.[6]

In 2004, he only played in fourteen events after missing three months due to surgery to repair cartilage damage in his wrist; he missed six cuts and his highest finish was T6, which caused him to fall out of the top hundred on the money list. He returned to good form in 2005 and regained his top ten ranking, winning a PGA Tour event in that year and two in 2006. In the 2006 season, he finished a career-high second on the money list and won the Vardon Trophy for the first time. He had 13 top-10 finishes, including nine top-3s, four second-place finishes, and two victories.[7][8]

The 2010 season was a banner one for Furyk. After going more than two seasons winless, he won a career-best three tournaments on Tour in 2010: The Transitions Championship, the Verizon Heritage, and the season-ending Tour Championship. His victory in the Tour Championship also earned him the 2010 FedEx Cup after winning by one stroke.[9] His accomplishments in 2010 won him both the PGA Player of the Year[10] and PGA Tour Player of the Year for the first time.[11]

Since 2012, Furyk has come close on several occasions to winning more titles. At the 2012 U.S. Open, Furyk led after 54 holes and was still the leader deep into the final day, before snap hooking his drive into the trees at the 16th which led to a bogey and was followed by another at the 18th. He finished in a tie for fourth, two strokes behind Webb Simpson. At the 2012 WGC-Bridgestone Invitational, Furyk led after the first three rounds and looked set to win the championship as he held a one-stroke lead going into the final hole, but a double-bogey cost him the title to Keegan Bradley.[12]

At the 2013 PGA Championship, Furyk led by one stroke going into the final day over Jason Dufner, but this time his lead was overturned on the front nine and he was unable to reduce the deficit as Dufner won by two strokes. Furyk's caddy since 1999 has been Mike "Fluff" Cowan, who was Tiger Woods' caddy for Woods' first two years as a professional.[13]

File:Jimfuryk.JPG
Furyk at the 2008 Players

On September 13, 2013, Furyk shot a 12-under-par 59 in the second round of the BMW Championship at Conway Farms Golf Club in Lake Forest, Illinois, becoming just the sixth player to shoot 59 in a PGA Tour event.[14]

In July 2014, Furyk held the 54-hole lead at the RBC Canadian Open, with a three stroke advantage over his nearest competitor Tim Clark. However Clark produced five birdies in his last eight holes to claim the title, after Furyk missed a 12 footer on the 18th green to force a playoff. The three shot margin was the largest 54-hole lead Furyk has ever lost in his tour career.[citation needed]

In February 2015, Furyk held a one shot lead at the AT&T Pebble Beach National Pro-Am going into the final round, but shot a two over round of 74 to finish six strokes behind Brandt Snedeker. Furyk's round was the worst of any player to finish within the top 50 on the final day. Since Furyk's last victory at The Tour Championship in 2010, he is 0-for-9 with a lead/co-lead after 54 holes.[15] On April 19, 2015, Furyk ended the long slump when he defeated Kevin Kisner with birdie on the second playoff hole at the RBC Heritage. The victory was his second at the event and his 17th victory on the PGA Tour.

In 2015, at the BMW Championship, Furyk withdrew with a wrist injury. This was his first withdraw since 1995, it also came at the same course he had shot a 59 two years before.[16] Furyk qualified for the 2015 Presidents Cup team but could not play due to the same injury and instead became an assistant captain. J. B. Holmes replaced him on the team.[17]

As Mike Furyk describes in a Golf Digest issue in 2001, Jim Furyk's hips "underturn" during the backswing and "overturn" coming down. On the downswing, he draws the club in a large arc behind his body (viewing from his right hand side), then pastes his elbow against his right hip at impact. Golf commentator Gary McCord has said it looks like Furyk is trying to swing inside a phone booth. Another commentator David Feherty memorably described Furyk's swing as "an octopus falling out of a tree". Others have noted it reminds them of "a one-armed golfer using an axe to kill a snake in a telephone booth."[18]