James Stuart "Jim" Gilmore III (born October 6, 1949) is an American politician who was the 68th Governor of Virginia from 1998 to 2002. A native Virginian, Gilmore graduated as a Bachelor of Arts and a Juris Doctor from the University of Virginia, and then served in the U.S. Army as a counterintelligence agent. He was later elected to public office as a county prosecutor, as the Attorney General of Virginia, and as Governor of Virginia. He was a candidate for the Republican nomination for President of the United States in the 2008 and 2016 elections.[1][2]

Gilmore was born in Richmond, Virginia, the son of Margaret Evelyn (née Kandle), a church secretary, and James Stuart Gilmore, Jr., a grocery store meat cutter.[3] He graduated from John Randolph Tucker High School and received an undergraduate degree from the University of Virginia in 1971.

Gilmore graduated from University of Virginia Law School in 1977, A decade later, he was elected Commonwealth's Attorney in Henrico County and was re-elected in 1991. In 1993, he was elected Virginia's attorney general, defeating Democrat Bill Dolan by more than 10 percentage points (958,982 to 749,565 votes).[5] Gilmore resigned in 1997 to run for governor.

In 1997, Gilmore faced then-Lieutenant Governor Don Beyer and Reform Party candidate Sue Harris Debauche in a bid to succeed George Allen as governor. Gilmore campaigned heavily on the twin promises of hiring 4,000 new teachers in public schools and phasing out Virginia's personal property tax on automobiles.[6] Gilmore was elected, winning 56% of the vote to Beyer's 43%.[7]

In his first year as governor, Gilmore pushed for car tax reduction legislation that was eventually passed by the Democratic-controlled General Assembly. The legislation reduced car taxes on all cars valued less than $1,000, and phased out the tax on auto values over $1,000 as follows: 12.5% reduction in 1998; 25% reduction in 1999; 47.5% reduction in 2000; 70% reduction in 2001; 100% reduction in 2002. Beginning in 2001, Virginia's economy slowed and tax revenues flattened. In addition to a downturn in the national economy in 2001, Northern Virginia's economy was severely impacted after terrorists flew a hijacked airplane into the Pentagon in Arlington, Virginia, on September 11, 2001, resulting in the closure of Reagan National Airport for several months. Despite the economic downturn, Gilmore insisted on advancing the car tax phase out from a 47.5% reduction of each taxpayer's bill in 2000 to the scheduled 70% reduction in 2001. Gilmore signed an executive order, which was passed by Congress, reducing state spending by all agencies, except for education, to keep the state's budget balanced during the economic downturn. Democrats criticized the spending reductions and car tax cut. According to the Washington Post, "Virginia's politicians struggled to balance car-tax relief against demands for public services."[8] When Gilmore left office in January 2002, the state's "rainy day fund," or revenue stabilization fund, had fallen to $900 million.[9]

Gilmore also implemented new Standards of Learning reforms in Virginia's public schools. The Standards of Learning prescribed a uniform curriculum in mathematics, science, English and social studies and instituted new tests at the end of the third, fifth and eighth grades, as well as end-of-course tests in high school, to measure student achievement. During Gilmore's term, Virginia's public school students' scores increased on these state tests as well as nationally normed tests.[10]

In 1999, Gilmore proposed and signed into law legislation that reduced tuitions at public colleges and universities by 20%. Gilmore also commissioned a Blue Ribbon Commission on Higher Education that studied accountability and governance of public colleges and universities. Gilmore's Commission authored the first blueprint for decentralized regulatory and administrative authority to some universities in return for agreements to meet agreed upon performance objectives.

Gilmore also proposed and signed into law Virginia's first stand-alone Martin Luther King Holiday. Prior to this proposal, Virginia had observed a combined Lee-Jackson-King Day that recognized Robert E. Lee, Stonewall Jackson and Martin Luther King on the same day each year. Gilmore and his wife hosted a historic reception in the Governor's Mansion for Coretta Scott King and announced a technology partnership between Virginia and the King Center for Nonviolence. Gilmore also proposed and funded a new African-American History Trail in Virginia and called upon the State Board of Education to include a more diverse range of historical figures in Virginia's Social Studies curriculum. Test scores during Gilmore's term showed a narrowing of the "achievement gap" between minority and white students. Gilmore significantly increased funding for two of Virginia's historically black universities, Norfolk State University and Virginia State University.

During his term, 37 people were executed in Virginia. Gilmore granted executive clemency to one death row inmate on the basis of mental illness. In another well publicized case, he pardoned Earl Washington, a former death row inmate, after DNA tests, ordered by Gilmore, implicated another person. Gilmore also ordered DNA tests in the case of Derek Rocco Barnabei; the tests confirmed Barnabei's guilt and he was executed.

As governor, Gilmore signed into law legislation establishing a 24-hour waiting period and informed consent for women seeking an abortion, as well as a ban against partial birth abortion. Gilmore increased funding for adoption services. He also signed into law a bill that banned human cloning. In 1998, Gilmore went to court to try to prevent the removal of a feeding tube of coma victim Hugh Finn. Gilmore argued that removal of a feeding tube was not removal of artificial life support because it amounted to starvation of an infirm person who could not feed himself. As Attorney General of Virginia, Gilmore had defended a legal challenge to Virginia's first parental notification law for minors seeking abortions.

The Virginia Constitution forbids any governor from serving consecutive terms, so Gilmore could not run for a second term in 2001. He was succeeded by Democrat Mark Warner, who took office in early 2002. 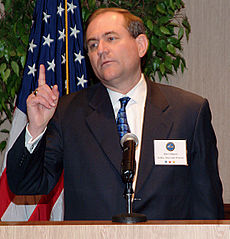 During his term as governor, Gilmore chaired the Congressional Advisory Commission on Electronic Commerce.[12] The Commission was charged with the task of making recommendations to the United States Congress on Internet taxation. The Commission's Report to Congress opposed taxation of the Internet.[13]

From 1999 to 2003, Gilmore chaired the Congressional Advisory Panel to Assess Domestic Capabilities for Terrorism Involving Weapons of Mass Destruction, nicknamed the Gilmore Commission.[14] It presented five reports to Presidents Bill Clinton and George W. Bush, and to Congress each December 15 from 1999 through 2003.

From January 2001 to January 2002, Gilmore was the Chairman of the Republican National Committee.[15]

A "Draft Gilmore for President" group was formed in August 2006 encouraging Gilmore to run for President of the United States.[16] On December 19, 2006, Gilmore announced he would form an exploratory committee to "fill the conservative void" in the race. On January 9, 2007, Gilmore officially filed papers with the Federal Election Commission to form the Jim Gilmore for President Exploratory Committee.[17]

Gilmore said he represented "the Republican wing of the Republican Party" in the race for the 2008 Presidential nomination; the comment mirrored the slogan used by Howard Dean when seeking the Democratic nomination in the 2004 election, who lifted the slogan from Senator Paul Wellstone. Gilmore officially announced his candidacy on April 26, 2007.[18]

On July 14, 2007, Gilmore announced that he was ending his campaign. Gilmore said that it would be "impractical" to run, citing the difficulty of raising enough money to be competitive in early-voting states Iowa, New Hampshire, and South Carolina.[20]

In an interview with Politico, Gilmore said that he had been approached to run for the Senate seat of John Warner, who announced his retirement for his senate term ending in 2009. By the end of the summer, many media outlets, most notably the Washington Post, thought it would be a foregone conclusion that Gilmore would jump into the Senate race. Gilmore's successor as governor, Mark Warner, had already announced in September, and 11th District Congressman Tom Davis had informally announced his candidacy a few days after Mark Warner's announcement.

Gilmore lobbied strongly for choosing the party's nominee at a statewide convention rather than a primary, claiming that a convention would cost only $1 million versus the $4 million required to run a primary campaign. This was no small consideration, as the race for the Democratic nomination essentially ended with Mark Warner's entry into the race. It was understood that Warner would use his considerable wealth to self-finance his campaign. It was thought that a convention would favor Gilmore, since most of the delegates would come from the party's activist base, which is tilted strongly to the right. A primary was thought to favor Davis due to his popularity in voter-rich Northern Virginia; Davis is a moderate Republican, and most Republicans in Northern Virginia tend to be more moderate than their counterparts elsewhere in the state. On October 13, 2007 the state party's central committee voted 47–37 to hold a convention rather than a primary. With this decision, Gilmore said he was seriously considering a run for the Senate.

Gilmore formally announced his candidacy via a YouTube video on November 19, 2007.[21] He said that he was running to give Virginia "a strong and steady hand" in the Senate. The domain name jimgilmoreforsenate.com had been registered on July 10 – four months before Gilmore's formal entry[22] – and the username that uploaded the video to YouTube had been registered on October 16.

Gilmore faced a challenge from his right in State Delegate Bob Marshall of Prince William County. Marshall charged Gilmore with being too soft on abortion. However, at the convention Gilmore won the nomination by only 65 votes out of 3,000 cast.

In the November election, Gilmore was heavily defeated, winning only 34 percent of the vote to Warner's 65 percent. Gilmore only carried four counties in the state – Rockingham, Augusta, Powhatan and Hanover. In many cases, he lost in many areas of the state that are normally reliably Republican.[23] This was the worst showing for a Republican Senate candidate in Virginia since Chuck Robb defeated Maurice Dawkins with 71 percent of the vote in 1988.

On July 7, 2015, Gilmore told the Associated Press that he planned to announce his candidacy for the 2016 Republican presidential nomination in the first week of August 2015. On July 29, Gilmore filed his candidacy for President of the United States with the Federal Election Commission.[24][25][26] He announced his candidacy via an internet video clip the next day.[1]

According to his campaign website, Gilmore's main issues that he would address if elected President include preserving the 2nd Amendment right to bear arms, immigration and border re-enforcement, healthcare reform, and restoring America's economy.[27] Gilmore struggled to gain any traction in the 2016 presidential race, and has been little known among voters, being excluded from most of the debates.

In the 2016 Iowa Republican caucuses, Gilmore received 12 votes, not earning him any delegates. He then received 133 votes in the New Hampshire primary. On February 12, Gilmore suspended his campaign.[2]

Gilmore is the President & CEO of the Free Congress Foundation,[28] a conservative think tank which was founded by Paul Weyrich.

Gilmore has also served as Chairman of the National Council on Readiness & Preparedness, a homeland security program focused on community involvement and public/private partnerships.[29] He is also President of USA Secure, a non-profit homeland security think tank based in Washington, D.C.[30]

He is also on the Board of Directors of the National Rifle Association.