Jim Goad (born 1961) is an American author and publisher. Goad co-authored and published the cult zine ANSWER Me! and The Redneck Manifesto. Known for his controversial political and socially charged viewpoints, Goad's work has been described as "compelling", "brutally honest"[1] and "original" by author Chuck Palahniuk.[2] Comedian Patton Oswalt cites Goad's writing as an influence.[3]

"Jim Goad may in fact be the bad man his wife, his girlfriend, the State of Oregon and numerous others said he is, but he's also a man of principle. You may disagree with his ethics, they may even repulse you, but you can't deny that he's thought them through, can articulate them with unusual clarity, tries to live by them more faithfully than you live by yours and if you debated him on them he'd probably kick your ass. Figuratively speaking, of course."
—John Strausbaugh, 2002[4]

James Thaddeus Goad was born June 12, 1961, in Ridley Park, Pennsylvania. When Goad's mother was still pregnant with him, his father, drunk, punched her in the stomach hoping to induce her to abort. Growing up in Clifton Heights, just outside Philadelphia, Goad described himself as a teenager who was a loner, misanthropic and a weirdo. He attended a Catholic school, and experienced violent treatment by the nuns and his father, eventually learning to fight back. As a teenager he wanted to move to New York City to study acting and was accepted to study at New York University under Stella Adler.[4]

Goad graduated in 1986 with a B.A. in Journalism from Temple University while living in New Jersey.[5][6] In the early 1980s Goad met Debra Susan "Debbie" Rosalie at a Johnny Thunders concert in New York City. Debbie was eight years older than Goad, Jewish and lived in Coney Island.[4][5] The couple lived in New York and Debbie worked at the Bureau of Alcohol, Tobacco and Firearms and Goad at a Lower East Side print shop.[5] The couple left New York suddenly after Goad beat up their Brighton Beach landlord for calling Debbie "stupid". The landlord filed, and then dropped, assault charges, but the Goads would not return to New York, settling in Los Angeles.[4] The couple married in Las Vegas in 1987. Upon arriving in Los Angeles, Goad started working at the Los Angeles Reader, covering local news, and freelancing for Playboy and Details magazine. Goad was unhappy with the content he was covering, and wishing to cover more fringe subjects the couple began publishing their own work.[5]

Around 1994 the couple moved to Portland, Oregon and Goad devoted his time to writing.[7] Debbie would be diagnosed with ovarian cancer while Goad was dating[5] ANSWER Me! groupie Anne "Skye" Ryan.[1] Goad described Ryan as "Sweet Dracula girl" and as being "...fifteen years younger than me and a thousand times more fucked-up."[4]

Goad and Ryan would have a physically abusive relationship, often beating one another up. They fought in public and were arrested and released.[4] In November 1997, Debbie filed a restraining order against Goad, claiming he was beating her on a daily basis, eventually withdrawing it, stating she was "bullied into" filing it and was mad at Goad for having an affair with Ryan.[5] Ryan eventually threatened to kill Goad, and he took out a restraining order against her.[4] Goad and Debbie would divorce in 1997.[6] In May 1998[5] the two had another confrontation with a fight in Goad's car outside of Portland. Goad left Ryan by the side of the road, fled to Washington,[1] and was charged with assault and kidnapping, totaling 25 years in prison. While Goad served 7 1/2 months of pretrial prison time, Ryan befriended a dying Debbie. The two heavily publicized their relationships with Goad, who would eventually cop a plea. Ryan would go on to serve a couple of months in prison on her own unrelated assault charges. When asked if he had any remorse or guilt about beating Ryan, Goad said, "Absolutely not. I enjoyed it." Starting in May 1998 he would go on to spend a year in a minimum security prison, after serving in a county jail and eventually moving into a maximum security prison. Goad served 2 1/5 years, being released in 2002.[4]

While in prison, author Jim Hogshire started a "Free Jim Goad" website, claiming that Goad was innocent and should be released from prison. Goad disagreed with the concept of the website, admitting that he was not innocent regarding his actions.[1]

Upon his release from prison in 2002, Goad returned to Portland and was on parole for a time. He wrote for Exotic, a free guide to the sex industry of the Northwestern United States and DJing "hard country with a big bass" at a local bar.[1][4] In 2008 Goad became a father.[8] He currently maintains his website, JimGoad.net, and writes for Taki's Magazine. Goad currently resides in Stone Mountain, Georgia.[9]

As a writer, Jim Goad has been called the "poster boy for the transgressive school of writing."[1] Goad utilizes wit and a style of prose described as "machine gun delivery," which reads in a fast paced manner, like "it was written by an angry auctioneer on XTC."[10] Palahniuk describes Goad's writing style as being "brutally honest without worrying about being correct,".[1]

Goad's work examines American culture, often popular and political culture. His early work reads anti-politically correct and as shock value, while his later work, like the Redneck Manifesto, and journalism contributions have marked Goad as a political and societal commentator. His political and social views have been called "Proto-Marxist," by book reviewer Matt Parrott, who also described Goad as being "anti-elite".[10] His views have also been described as moderate politically, and that his writing style only makes his beliefs appear extreme. In his political commentary he has described conservatives and liberals in the United States as "two asscheeks surrounding the same hairy bunghole," and that politicians know how to take advantage of lower- and middle-class people because of a human's innate tribalism.[11] In 2018 he explained that he considers the main political divide to be over the question of whether disparities in various measures of success in life are "due to unfairness or to disparities in ability," and that he believes it is the latter.[12]

Goad has repeatedly stated that he is interested in what is true or false, not what is considered good or evil.[13] He describes himself as "possibly...somewhere on the autism spectrum" in that he values "logic over social approval."[12] He describes guilt as "one of the main themes" in his writing and criticizes it as a weapon used to disempower people.[14][13] Another of the main themes in his writing is "the problems of religious thinking...rationality doesn't make a dent in it."[15]

From 1991 to 1994[8] Goad self-published four yearly issues of the zine ANSWER Me!, with then wife Debbie Goad. It featured illustrations by Nick Bougas. With a circulation of 13,000 the magazine sought to upset politically correct thinkers by covering subjects about race and feminism. The publication was banned and seized by customs officials in several countries, and the final Rape Issue, was rejected by some bookstore owners. The zine, called "massively influential" by Bizarre, would also be credited as an inspiration by Francisco Martin Duran, who took 29 shots at the White House,[7] influencing the suicides of three British Neo-Nazis, and a possible influence on Kurt Cobain's suicide.[4]

Goad signed a two-book deal with Simon & Schuster for $100,000.[5] In 1997 The Redneck Manifesto: How Hillbillies Hicks and White Trash Became America's Scapegoats was published. The book explores the idea of poor whites celebrating their heritage similar to poor African Americans and that discrimination in the United States is focused around social class not race. His thesis is that the rich elite blind the poor, and cause them to fight one another, instead of working together for their mutual benefit.[16]

Shit Magnet: One Man's Miraculous Ability to Absorb the World's Guilt, is Goad's second book. Major New York publishing houses declined to publish Shit Magnet,[17] and it was published in 2002 by Feral House. The book, written while Goad was in prison, is an autobiography. It examines Goad's childhood, teenage years, his relationships with former wife Debbie Goad and ex-girlfriend Anne Ryan, and reflections about his time in prison and his experience with the judicial system. The book includes great detail about Oregon prison life, including detailed descriptions about fellow prisoners, of whom he writes "forced sterilization maybe wasn't such a bad idea."[1] Writer John Strausbaugh described Shit Magnet as "extremely painful" in detail and comparative in drama to the autobiography of Klaus Kinski.[4] Humor is Dead calls Shit Magnet a "sordid and often shocking personal allegory of guilt and violence."[11] In 2008, a play titled "Torn Between Two Bitches," was produced in Los Angeles by Michael Sargent, based on Shit Magnet.[18] Shit Magnet was translated on Russian and published by Kislorod publishing house, now defunct in terms of physical publishing.

He wrote a comic called Trucker Fags in Denial, which was originally published as a comic strip in the Portland-based publication Exotic and was published as a comic book by Fantagraphics in 2004.[11][19][20] The comic, written by Goad and illustrated by Jim Blanchard, is about two truckers named Butch and Petey. The two characters are homophobic and beat up gays between trucking. The characters contradict their behavior by having a homosexual relationship with each other. The comic serves as a satirical examination of cultural scapegoating, often seen in Goad's writing. Goad came up with the idea for the comic while in prison, where he frequently observed male prisoners insulting each other as being "fags," and as "fagging off,' despite engaging in homosexual acts themselves while incarcerated.[19][20] Willamette Week's gay columnist Byron Beck described Trucker Fags in Denial as "twisted, vile, unrepentant...and absolutely hilarious."[19]

In 2007 Jim Goad's Gigantic Book of Sex was published.[8] The book consists of over 100 articles, op-eds and facts about sex, all written by Goad.[21]

In 2017 Goad released The New Church Ladies: The Extremely Uptight World of "Social Justice", which criticizes social justice advocates for their victim mentality and abusive behavior towards those who disagree with them, as well as their lack of humor. The title was taken from an interview by a third party with author Jack Donovan, who used the same phrase to describe the people in question,[22] and Goad has explained it as a reference to The Church Lady, a Dana Carvey character intended to satirize strict Christians.[23]

In 2018 Goad released Whiteness: The Original Sin, a collection of essays dealing with the public demonization of white people via concepts such as racism and white privilege. The title is taken from a 2016 Goad article previously published at Taki's Magazine discussing the same issues.[24]

In 2020 Goad released Gender Psychosis, a collection of essays on gender issues including feminism, rape, homosexuality and transgenderism.[25]

Currently, Goad is a writer/producer for Thought Catalog[26] and as of 13 October 2020 he writes a twice-weekly column for self-described white nationalist site Counter-Currents[27]. Goad has also contributed to Vice,[9] New York Press,[28] the San Francisco Bay Guardian[28] and Hustler.[11] In 2013 Jim wrote a foreword to a compilation of issues of the 1990s zine Gun Fag Manifesto. He thanked the editor, Hollister Kopp, in his book The Redneck Manifesto. 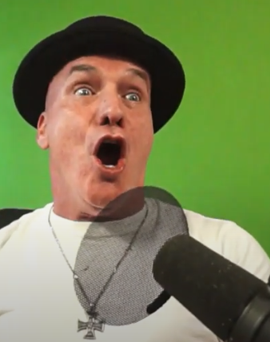 Jim Goad is a singer and has released music and performed as Big Red Goad. In 2007 he toured with Hank III.[29] He also performs karaoke requests on his YouTube channel.[30] Goad cites trucker music as an influence on his own music.[20]

In 2002 Goad acted in The Suzy Evans Story, a film about a lieutenant-detective who protects a battered woman named Suzy and proceeds to abuse her himself. Goad acknowledges that it was typecasting.[4] The film was never released.[2]