From Infogalactic: the planetary knowledge core
Jump to: navigation, search
This article is about jazz guitarist Jim Hall. For the other guitarist, a retired professor from the University of South Carolina School of Music, see James A. Hall.

HIDDEN ERROR: Usage of "Notable Guitars" is not recognized

Born in Buffalo, New York, before moving to Cleveland, Ohio, Hall was from a musical family, his mother played the piano, his grandfather violin, and his uncle guitar.[3] He began playing the guitar at age ten when his mother gave him an instrument as a Christmas present. As a teenager in Cleveland, he performed professionally, and also took up the double bass. Hall's major influences since childhood were tenor saxophonists Coleman Hawkins, Lester Young, Paul Gonsalves, and Lucky Thompson.[4] While he copied out solos by guitarist Charlie Christian (and later Barney Kessel), it was horn players from which he took a lead.

In 1955, Hall attended the Cleveland Institute of Music where he majored in composition, studied piano and bass, in addition to theory. About a year later, he moved to Los Angeles, where cool jazz was prominent at the time. He studied classical guitar with Vincente Gomez, and, from 1955 to 1956, played in Chico Hamilton's quintet. It was at this time that he began to gain attention.[5]

In the Jimmy Giuffre Three, Hall developed some of his own personal musical preferences, including "challenging arrangements and interactive improvisation in duos and trios."[6] He taught at the Lenox School of Jazz in 1959; toured with Jazz at the Philharmonic; and worked with Ben Webster (1959), Bill Evans (1959), Paul Desmond (1959–65), Ella Fitzgerald in Europe (1960), Lee Konitz (1960–61), Sonny Rollins (1961-2, 1964), and Art Farmer (1962-1964). Working with all of these prominent and established artists furthered Hall's career and aided in producing his own bands and own styles.[6]

By 1960, Hall was living in New York. In 1962, he led a trio with Tommy Flanagan and Ron Carter—with the addition of Red Mitchell in 1965. Furthermore, he landed a gig playing with Bill Berry, Bob Brookmeyer, Benny Powell, Art Davis and Jake Hanna as a house band for The Merv Griffin Show on television. Most notably, he arranged and recorded duos with Evans and Carter, which allowed his complex arrangements and improvisations to shine.[6] 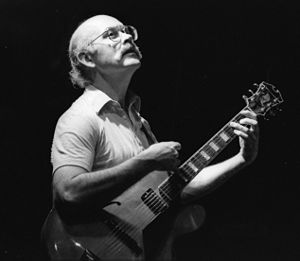 Hall was an arranger and composer as much as an artist, known for developing motives and using blues inflections. These characteristics are showcased in his 1975 album Jim Hall Live!, with Don Thompson and Terry Clarke. Around this time he also recorded with pianist George Shearing and classical violinist Itzhak Perlman. He further continued creating music with Mitchell and Ron Carter until 1985.[6]

In the 1990s, Hall continued to tour and record all over the world. His sidemen included drummers Bill Stewart and Andy Watson; and Joey Baron, bass players Scott Colley and Steve LaSpina; pianists Gil Goldstein and Larry Goldings. At times, Hall included Chris Potter and Greg Osby on the tenor saxophone. These players are featured on Hall's video Master Sessions with Jim Hall from 1993. Hall appeared as a guest soloist in Michel Petrucciani's trio with Wayne Shorter in 1986 and performed at the Village Vanguard with Bill Frisell. In 1990, he hosted the JVC Jazz Festival New York, which also featured Pat Metheny and John Scofield. After this, he played a number of duo concerts with Metheny. In 1994, Hall recorded a solo album. Furthermore, in 1996, he returned to Europe to lead a quartet with Joe Lovano.[6]

In 1997, Hall received the New York Jazz Critics Award for Best Jazz Composer/Arranger, which was a very important milestone in his career. His pieces for string, brass, and vocal ensembles can be heard on his Textures and By Arrangement recordings. His original composition, "Quartet Plus Four", a piece for jazz quartet featuring the Zapolski string quartet, was debuted in Denmark, where he was awarded the Jazzpar Prize.[3]

His last orchestral composition was a concerto for guitar and orchestra, commissioned by Towson University in Maryland for The First World Guitar Congress, which was debuted in June 2004 with the Baltimore Symphony. He was awarded an NEA Jazz Masters Fellowship award in January 2004. Hall was one of the first artists to join the fan-funded label ArtistShare and released Magic Meeting in 2005. In 2006, on behalf of the French Minister of Culture, Kareen Rispal, Cultural Counselor of the Embassy of France, bestowed Hall with the honor of Chevalier dans l’ordre des Arts et des Lettres, saying, in part, “We honor you, Jim Hall, for expanding the musical universe, for your innovations and contributions to musical expression. We salute your ongoing experimentation which has been known countless times to bring people around the world together."[7] In November 2008 the double album Hemispheres was released through ArtistShare, featuring fellow guitarist and former student Bill Frisell[8] with Scott Colley (bass), Joey Baron (drums) and produced by Brian Camelio.

Hall married Jane Herbert who took his name on September 9, 1965, a song writer and psychoanalyst.

Hall performed in a project titled The Live Project, where he shared his music making process through ArtistShare as well as interviews with other musicians about his lasting influence. In 2010, Hall and Baron recorded a duo album entitled Conversations.[9] In 2012 at the age of 81, Hall had gigs at the Blue Note in New York City and at a number of jazz festivals in the US as well as in Europe.

"With each new concert tour and recording Jim reveals yet another facet of himself."[3]

Hall's musical style develops with every new album and collaboration he engages in. His approach to music is unique - he views music as a way to break all barriers, not limited to music, as well as to share his discoveries with others.[3] Music is a vehicle of peace for Hall and he therefore makes it a goal to reach out to others and communicate his music, teaching seminars all over the world. He is innovative and always interested in new modes of musical expression to further his ability.[3]

Hall's tone has been described as mellow, warm, gentle, subtle, rich, and lightly amplified.[3] Unlike other musicians, Hall's work is not necessarily recognized by a signature riff but rather his expressive capabilities.[3] As an arranger, his solos are aptly constructed, taking into account harmonic, melodic and rhythmic elements.[3] They are composed with both feeling and technique with clarity as the ultimate goal.[3]

Hall was especially innovative with instrumentation, mixing classical with jazz by adding violinist Itzhak Perlman into the mix. Furthermore, in 1957, he played in a trio with saxophonist Jimmy Giuffre and trombonist Bob Brookmeyer, without any rhythm section. Without piano, bass, or drums, the three musicians improvise at the same time, keeping rhythm themselves.[3] Similar to Duke Ellington, the other artists on the record influence the composition and he creates music to showcase their talents as well.[12] Furthermore, he is always open to what is new and what others are playing, including the guitar synthesizer.[13]

I'm not sure I have what's called a style, but I have an approach to music, an attitude to consciously allow myself to grow. I don't like to be boxed in or labeled as having to do with any certain period of jazz music or music in general.[14]

Silence is as much a part of Hall's music as is sound. Intimate settings, such as smaller clubs, showcase this strength.[15] Hall "carefully [chooses] a few notes instead, one after another, and placed them with the care of someone setting an elegant table."[16] Although Hall is generally a leader, his excellent listening skills allow him to aid other musicians harmonically when required and staying silent when needed.[15] Everyone is equal in Hall's groups, he explains, "each one of these guys is a creative, growing musician, and I treat them that way."[15]

Exemplifying Hall's musical style is his collaboration with guitarist Pat Metheny (1990). The duo had met thirty years previously, when guitarist Attila Zoller brought 15-year-old Metheny to The Guitar, a club where Hall and bassist Carter had a standing position.[17]

"Jim is father of modern jazz guitar to me, he’s the guy who invented a conception that has allowed guitar to function in a lot of musical situations that just weren't thought of as a possibility prior to his emergence as a player. He reinvented what the guitar could be as a jazz instrument... Jim transcends the instrument... the meaning behind the notes is what speaks to people." - Pat Metheny[14]

Because of his desire for spontaneity and emphasis on communication with other musicians and others, Hall preferred live venues.[14] However, Metheny is the opposite, so the album contains pieces recorded live and in the studio. Reflecting Hall's broad musical tendencies, this album contains originals by him, Metheny, mutual friends Steve Swallow and Zoller, and two standards.[14] Hall and Metheny's expertise and virtuosity allowed for much improvisation, usually spurred by mood, which led to different compositions,"at times acoustic, soft, reverential, melodic, cacophonous, outlandish, humorous, and upbeat."[14]

Hall changed the way jazz guitar sounded, with his innovation, composition, and improvisation. Apart from Metheny, he influenced other contemporary artists such as Bill Frisell, Mick Goodrick, John Scofield, and John Abercrombie.[14]

Hall always used an extremely simple approach regarding his instruments. In the early stages of his career, playing with Chico Hamilton, he used a Gibson Les Paul Custom. From that period on, he has been associated with the Gibson ES-175 guitar. This guitar, originally with a single P90 pickup, was used with a Gibson GA50 amplifier. He then switched to a humbucking pickup before acquiring a custom made D'Aquisto guitar. After the GA50 he started using solid-state amplifiers, mostly Polytones (although he also used Walter Woods Amp and Harry Kolbe GP-1 Pre-Amp and Cab). He also used his signature Sadowsky guitar, based on his original D'Aquisto.[18][19]

When asked if he ever tried playing solid-body guitars again, he said "solid bodies are strange to me, I need to feel the body resonating".[citation needed]

With the Kronos Quartet

With the Modest Jazz Trio