He began his playing career at Brentford in 1949, and moved to Fulham three years later. As president of the Professional Footballers' Association, he successfully campaigned for an end to The Football League's maximum wage in 1961. After retiring as a player, he took over as manager of Coventry City, modernising the team's image and guiding them from the Third to the First Division. In 1967, he began a career in football broadcasting, and from 1973 to 1988 was host of the BBC's Match of the Day.

Hill was born in Balham, London, the son of William Thomas Hill, a World War I veteran, milkman, and bread delivery worker and Alice Beatrice Hill née Wyatt.[1] He was a pupil at Henry Thornton Grammar School, Clapham (1939–45), and later became President of the Old Boys' Association.[2] He did national service as a clerk in the Royal Army Service Corps in which he attained the rank of Corporal and was considered a potential candidate for officer training.[3]

Hill first came into football as a fan, regularly watching football at local club Crystal Palace, but, despite this, he started playing in 1949 with Brentford, making 87 appearances before moving to Fulham in March 1952, for whom he played nearly 300 games, scoring 52 goals. He set up a club record by scoring five goals for Fulham in an away match against Doncaster Rovers in 1958 and was part of the team that gained promotion to the First Division.

In 1957, he became chairman of the Professional Footballers' Association (PFA) and campaigned to have the Football League's £20 maximum wage scrapped, which he achieved in January 1961,[4] when Fulham teammate Johnny Haynes became the first £100 a week player.[2]

In November 1961, after retiring as a player aged 33, Hill became manager of Coventry City. His time at Coventry was marked by great changes to the club, nicknamed "The Sky Blue Revolution". He changed the home kit's colours to sky blue, coining the nickname "The Sky Blues". He also penned the club song "The Sky Blue Song", sung to the tune of the Eton Boating Song.[5] Among his other innovations were the first full-fledged match programme in English football, and organised pre-match entertainment to encourage fans to arrive early. His partnership with the chairman D H Robbins also led to a redevelopment of the stadium, Highfield Road, with two new stands being built.[6]

After winning the Division Three championship in 1963–64, and the Division Two title in 1966–67, Hill quit the club shortly before the start of the 1967–68 season as the club entered the top flight for the first time.[5]

After leaving Coventry in 1967, Hill moved into broadcasting, acting as technical adviser to the BBC's football-based drama series United! before becoming Head of Sport at London Weekend Television from 1968 to 1972. He also fronted their World Cup 1970 coverage which, at his suggestion, used the first panel of football pundits.[7]

He was briefly LWT's Deputy Controller of Programmes, before joining the BBC to present Match of the Day. Hill racked up 600 appearances on the show, and became a television icon, instantly recognisable and often caricatured for his long chin and distinctive beard. As a presenter or analyst, he worked on every major international championship from 1966 to 1998. As a broadcaster with the BBC he was present at the Hillsborough disaster in 1989, whilst covering the game for Match of the Day.[2]

In 1999, Hill moved from the BBC to Sky Sports, where he featured on Jimmy Hill's Sunday Supplement, a weekly discussion show between Hill and three football journalists conducted over a Sunday breakfast.[2] In 2007, he was replaced by his co presenter Brian Woolnough and the programme was renamed Sunday Supplement.[8]

In 2004, Hill defended fellow pundit Ron Atkinson over racist comments he had made which were broadcast in the Middle East. Hill was asked whether he thought Atkinson should resign over the comments, to which he said it was the "language of the football field". Hill went on to say: "In that context, you wouldn't think that words like nigger were particularly insulting: it would be funny. Without meaning to insult any black men, it's us having fun ... I mean, nigger is black - so we have jokes where we call them niggers because they're black. Why should that be any more of an offence than someone calling me chinny?". His comments were described as "mind-boggling" by the then director of Kick it Out, football's anti-racism group. He went on to say: "Jimmy Hill's comments are as offensive as Ron Atkinson's".[9]

Despite his departure as manager in 1967, Hill returned to Coventry City as managing director in April 1975 before becoming the chairman.

When Coventry played their last ever match at Highfield Road in 2005, Hill received a post-match hero's welcome from the capacity crowd, and led them in a rousing chorus of "The Sky Blue Song". In 2007, fans voted for a bar at the new Ricoh Arena to be named "Jimmy's" in his honour.

Following a spell as chairman of Charlton Athletic, Hill made a return to Fulham in 1987 to become chairman, helping his old club survive near-bankruptcy, and blocking an attempted merger with Queens Park Rangers

Hill was a trustee of the Stable Lads' Association, and a patron of Labrador Rescue South East and Central.[10]

As chairman, at a crucial relegation match at home to Bristol City at the end of the 1976–77 season, Hill was advised to delay the kick off by 10 minutes for fans still outside caught in the heavy traffic. Relegation rivals Sunderland, playing at Everton kicked off on time. Sunderland eventually lost the game 2–0. The Sunderland result was flashed up on the scoreboard. Hill was accused by Sunderland fans of making his players pass the ball around in their own half for the last 10 minutes of the game, thereby saving Coventry from relegation at the expense of Sunderland (Coventry's game with Bristol City stood at 2-2, and a goal for one or the other of the teams would have led to Sunderland staying up and either Coventry or Bristol City being relegated). A subsequent Football League inquiry was held but Hill, who at the time was in a senior position at the Football League, did not stand to one side while the inquiry was held. Coventry were asked not to interfere again but the result stood.[11]

Hill married three times, having three children by his first wife, Gloria, and two by his second, Heather. Hill published his autobiography, The Jimmy Hill Story, in 1998.[12] Hill also wrote Striking for Soccer in 1963 and Tips from the Top, a football coaching book, in 1970.[13][14] In September 2013 it was revealed that he had been diagnosed with Alzheimer's disease in 2008. His children by his second wife expressed concern that they had no role in determining his care, as Hill had assigned power of attorney in 2005 to his third wife, Bryony, and a solicitor.[15] Bryony Hill published a memoir in 2015, My Gentleman Jim, detailing her husband's illness.[16] Hill died on 19 December 2015, aged 87.[17] A celebration of Hill's life took place at Coventry Cathedral on 12 February 2016.[18]

Hill was the president of non-league team Corinthian Casuals. He resided in Hurstpierpoint, West Sussex.[19] 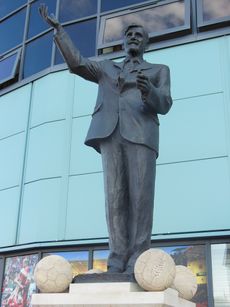 The statue of Hill outside Coventry's Ricoh Arena

Sculptor Nicholas Dimbleby was commissioned to build a statue of Hill at a cost of £150,000. The statue is located at Coventry's Ricoh Arena ground and was unveiled by Hill in person on 28 July 2011.[20] The money to build the statue was raised from public donations. Other former Coventry City players from Hill's six-year term as manager were there for the unveiling ceremony, including Bobby Gould, John Sillett and George Curtis, all of whom went on to manage the club in the 1980s.

He had a reputation as an all-round innovator in football: as well as helping to get rid of the maximum wage, he commissioned the first English all-seater stadium, lifted a ban on media interviews, introduced the first electronic scoreboard in 1964, the first colour matchday programme and in 1965 the first to show a live match via CCTV on four giant screens at Coventry.[21] He has been credited with the introduction of the three points for a win system, pioneered by The Football Association in 1981.[22] He was also credited with the idea of using the first panel of football pundits for the 1970 World Cup.[22]

A memorial garden was opened back in 2006 in honour of Jimmy Hill outside Coventry City's arena Ricoh Arena. A new memorial garden that will be twice the size of the old was revealed on April 30 2016 before the game against Sheffield United. [23]

In 1972, Arsenal were hosting Liverpool at Highbury on 16 September, when linesman Dennis Drewitt pulled a muscle and was unable to continue. FA rules state that the match could not be completed without a referee and two linesmen, so the game was in danger of being abandoned. The matchday announcer put a message over the loudspeaker asking if anyone was a qualified referee and would volunteer to run the line. Hill was a qualified referee and had been at Highbury that day as a spectator. He quickly donned a tracksuit before stepping in for the injured Drewitt.[24]

All competitive league games (league and domestic cup) and international matches (including friendlies) are included.[25]