Jimmy Spencer (born February 15, 1957) is a former American television commentator and NASCAR driver. He hosted the NASCAR-inspired talk show, “What’s the Deal?”, on Speed,[1] and was co-host, with John Roberts and Kenny Wallace, of the Speed's pre-race and post-race NASCAR shows NASCAR RaceDay and NASCAR Victory Lane. Before retiring, Spencer had segment on Speed's NASCAR Race Hub offering commentary and answering viewer questions (Tuesdays and Thursdays). During his days racing modifieds, he was nicknamed "Mr. Excitement"[2] for his aggressive racing style. Spencer is one of the few drivers to have won a race in all three of NASCAR's top series: Sprint Cup, Xfinity, and Camping World Truck Series

Jimmy Spencer followed his father, Ed Spencer, Sr. (Fast Eddie), in racing. Spencer started in Late Models in Pennsylvania. He captured his first racing win in the Late Model division at Port Royal Speedway in 1976. He moved to NASCAR Modifieds at Shangri-La Speedway (Owego, New York), then branched out to bigger events throughout the Northeast.

In 1984, Spencer was one of the top contenders for NASCAR's National Modified Championship, at a time when all sanctioned races counted toward that title; after running over sixty races, he was second to Richie Evans in the final standings. When NASCAR changed the National Modified Championship into the smaller-schedule Winston Modified Tour (now Whelen Modified Tour) in 1985, Spencer continued to run, and won the title in 1986 and 1987.

Spencer debuted in the Busch Series in 1985, finishing 19th at North Carolina Motor Speedway in the No. 67 Pontiac for Frank Cicci Racing, which was also his Modified team. The team ran twice in 1987 with a best finish 36th, then ran the full season in 1988, finishing seventh in the point standings in the No. 34. In 1989, Spencer won his first career Busch race at Hickory Motor Speedway, then won two more races over the course of the season, finishing fifteenth in the final standings. 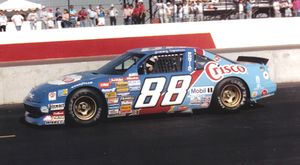 In 1989, he moved to the Winston Cup Series, driving the No. 88 Crisco Pontiac for Buddy Baker's team in 17 of the 29 races. He posted three top-tens and finished 34th in points. He then ran full-time in 1990, finishing in the top-ten twice for Rod Osterlund Racing. During the season, he posted two top-tens in the No. 57 Heinz Pontiac and finished 24th in points. In 1991, Spencer moved to the No. 98 Banquet Frozen Foods Chevrolet for Travis Carter Motorsports. Despite six top-ten finishes, Spencer dropped one position in the standings due to twelve DNFs. He began 1992 with Carter, but moved down to the Busch Series to drive the No. 20 Daily's 1st Ade Oldsmobile for Dick Moroso after Carter's team folded early in the season. He responded with wins at Myrtle Beach Speedway and Orange County Speedway. 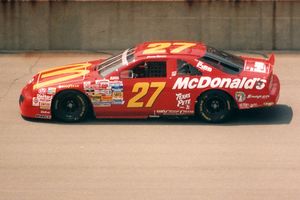 Late in the 1992 season, Spencer joined Bobby Allison Motorsports' Cup team and posted three top-fives in the last four races of the season. He signed to drive Allison's No. 12 Meineke Ford Thunderbird full-time in 1993, and finished in the top-five five times, resulting in a career-best fifteenth-place in the final standings. In 1994, he drove the No. 27 McDonald's Ford for Junior Johnson and won his first two and so far only career Cup races, at Daytona and Talladega. In the 1994 Pepsi 400, Spencer won his first career Cup race despite leading only one lap.[3] He also won his first career pole at North Wilkesboro Speedway. 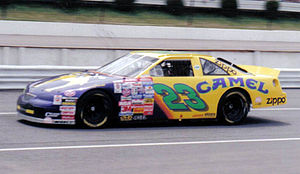 After finishing 29th in the standings in 1994, Spencer left to reunite with Travis Carter, who was now fielding the No. 23 Smokin' Joe's Ford. He finished in the top-ten four times in 1995 and in 1996, Spencer had two top-fives en route to a fifteenth-place finish in points. He fell to twentieth in 1997.

In 1998, Winston/No Bull became his team's new primary sponsor and he was eleventh in points when he suffered injuries at the Brickyard 400, forcing him to sit out the next two races to recover and fall to fourteenth in points. During the season, Spencer formed his own NASCAR team, Spencer Motor Ventures, which fielded the No. 12 Zippo Chevrolet Monte Carlo in the Busch Series for himself and several other drivers. The team expanded to two cars in 1999, fielding the No. 12 and the No. 5 Schneider National Chevy for Dick Trickle. In 2000, he moved his team up to Cup to run the road course races with Boris Said in the No. 23 Federated Auto Parts Ford Taurus. The team ceased operations at the end of the season.

After a 20th-place finish in 1999, Winston left the team, and Kmart became the team's new sponsor, causing Spencer to switch to the No. 26 to accommodate the new sponsor, who was already backing the No. 66 car driven by Spencer's teammate, Darrell Waltrip. Spencer had two top-fives and in 2001 won the pole positions at Indianapolis Motor Speedway and Lowe's Motor Speedway and advanced to sixteenth in points. He departed the team at the end of the season.

For the 2002 season, Spencer would join Chip Ganassi Racing and drive the No. 41 Target Dodge Intrepid. He began the season by failing to qualify for the Daytona 500, then had a streak of four top-five qualifying efforts, including at Bristol Motor Speedway, where he started fourth and was leading the race when he was bumped by Kurt Busch to win, starting a long rivalry between the two. After another DNQ at Watkins Glen International, Spencer was released from the ride at the end of the season, causing him to file a lawsuit against the Ganassi organization, saying his dismissal was a violation of his contract. During the season, he also won his most recent Busch Series race to date at Bristol driving for James Finch.

Spencer joined Ultra Motorsports in 2003, piloting the No. 7 Sirius Satellite Radio Dodge. After some on-track incidents with Kurt Busch, Spencer confronted Busch after the GFS Marketplace 400 while Busch was still in his car. He was suspended for the next week's race, the Sharpie 500 at Bristol Motor Speedway while Busch was placed on probation. Despite the events that took place at Michigan, he had four top-tens and ended the season 29th in points. He was also hired to drive three races for in the No. 2 Team ASE Racing Dodge Ram for Ultra's Truck Series team, winning the pole and the race in his second start at New Hampshire International Speedway. He became a part-owner of the Cicci organization that season, when he put Stuart Kirby in Cicci's No. 34 United States Air Force Chevy, but that partnership soon dissolved. He continued to remain involved as a part-owner, when he leased his shop to Bang! Racing in the Craftsman Truck Series in 2004.

He began 2004 with Ultra's Cup team at the Daytona 500, but when the team closed down due to a lack of sponsorship, he replaced Kevin Lepage at Morgan-McClure Motorsports, which had also been running unsponsored. Spencer's best finish that season had been 13th, when on October 25, he was arrested after trying to interfere with the police, who had a warrant to arrest his son for vandalism. The incident cost Spencer his job at Morgan-McClure, and he sat out the rest of 2004.[2]

Spencer returned to the No. 2 Ultra truck in 2005. While he failed to win a race, he had nine top-ten finishes and finished twelfth in points. He did come close to a victory, however, in the season opener at Daytona. He held the lead late in the race and held off 2004 series champion Bobby Hamilton until just before the caution came out on the last lap. Assuming he was in the lead when NASCAR froze the field, he completed the caution lap then pulled into victory lane, only to be told by an official that, in fact, he had finished second. He also ran part-time in Cup, running nine races in the No. 50 Arnold Motorsports Dodge, and one race apiece for Peak Fitness Racing and R&J Racing.

When Arnold was unable to locate a sponsor and Ultra closed its doors following a fallout with the Ford Motor Company, Spencer began working full-time on SPEED. He had run both Cup races at Pocono Raceway for Furniture Row Racing in 2006, finishing 32nd and 36th, respectively. Spencer then worked full-time as an analyst for SPEED TV and was the host of his own show What's The Deal?, along with Ray Dunlap in 2010. The show was cancelled the same year. His segments on the Tuesday and Thursday editions of NASCAR Race Hub are done from the studio of that show.

In 2010, 2011, 2012, and present, Spencer talks about the NASCAR highlights while he often feigns sobs with his gag called "The Crying Towel" for which driver gets the crying towel and the fake cigar if they complain about something that cannot be punishable. In 2012 Spencer named his "Crying Towel" segment as (Driver) Radio Sweetheart."

On November 21, 2013 on NASCAR Race Hub, Spencer said he was still not ready to announce his retirement yet, even though he hasn't raced in years.