From Infogalactic: the planetary knowledge core
Jump to: navigation, search
This is a Korean name; the family name is Jo. 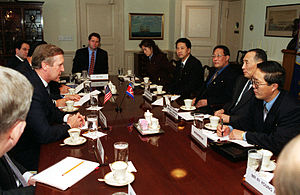 Jo Myong-rok (12 July 1928 – 6 November 2010[1]) was a North Korean military officer who held the military rank Chasu (Vice Marshal). In 2009, he was appointed First Vice-Chairman of the National Defence Commission of North Korea,[2] Director of the Korean People's Army General Political Bureau. Previously, he was the commander of the air defence forces.

Jo was born in Yonsa County, North Hamgyong province, on 12 July 1928 and he joined the Korean People's Army in December 1950.[3] He was a graduate of the Manchuria Aviation School and Soviet Air Academy.[3] 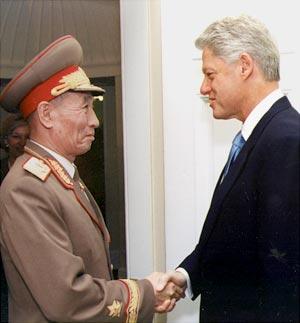 At the 6th Party Congress in 1980, Jo Myong-rok was elected both member of the Central Committee of the Workers' Party of Korea (of which he had been an alternate member since 1975) and its Military Commission. In the 1990s, he saw a huge increase of his importance: in 1992 he was promoted to general; in 1994 he was part of Kim Il-sung's funeral committee; in 1995 he was promoted to Vice Marshal and director of the KPA General Political Bureau.

He made a key speech commemorating the third anniversary of Kim Il Sung's death in special ceremonies on 8 July 1997.[4] By 1998, when he was also appointed to the position of First Vice Chairman of the National Defence Commission, he was the second most powerful person in the country, ranking immediately beneath Kim Jong-il himself.

On 6 November 2010, Jo died of a heart attack at the age of 82,[1] one month after he was elected as member of the Presidium of the Political Bureau.[6] His funeral committee was chaired by Kim Jong-il and Kim Jong-un. He was lying in state in the Central Workers' Hall (home of the General Federation of Trade Unions of Korea) in Pyongyang before buried in the Patriotic Martyrs' Cemetery.

Against expectations, his successor was not elected at the 4th Session of the 12th Supreme People's Assembly in April 2011. There was speculation that Kim Jong-il was deliberately leaving the post vacant in order to promote his son, Kim Jong-un, when he was ready.[citation needed]