Marshal of France and Grand Admiral or Admiral of France, Joachim-Napoléon Murat (French pronunciation: ​[ʒoakim napoleɔ̃ myʁa] (born Joachim Murat; Italian: Gioacchino Napoleone Murat; German: Joachim-Napoleon Murat; 25 March 1767 – 13 October 1815) 1st Prince Murat, was Grand Duke of Berg from 1806 to 1808 and King of Naples from 1808 to 1815. He received his titles in part by being the brother-in-law of Napoleon I of France through marriage to his youngest sister, Caroline Bonaparte, as well as personal merit. He was noted as a daring, brave, and charismatic cavalry officer as well as a flamboyant dresser and was known as "the Dandy King".

Joachim Murat was born on 25 March 1767 in La Bastide-Fortunière,[1] (renamed Labastide-Murat after its renowned citizen), in the Lot department of France, in the former province of Guyenne, to Pierre Murat-Jordy, (d. 27 July 1799), an affluent farmer and an innkeeper,[2] and his wife Jeanne Loubières (La Bastide Fortunière, b. 1722 – La Bastide Fortunière, d. 11 March 1806), daughter of Pierre Loubières and of his wife Jeanne Viellescazes. Pierre Murat-Jordy was the son of Guillaume Murat (1692 – 1754) and his wife Marguerite Herbeil (d. 1755); paternal grandson of Pierre Murat, born in 1634, and wife Catherine Badourès, who died in 1697; and maternal grandson of Bertrand Herbeil and wife Anne Roques.

Joachim Murat's parents intended he pursue a career in the church, and he was taught by the parish priest, after which he won a place at the College of Saint-Michel at Cahors when he was ten years old. He then entered seminary of the Lazarists at Toulouse, but when a regiment of cavalry passed through the city in 1787, he ran away from seminary and enlisted on 23 February 1787 in the Chasseurs des Ardennes, which the following year became known as the Chasseurs de Champagne, also known as the 12th Chasseurs. In 1789, an affair forced him to resign, and he returned to his family, becoming a clerk to a haberdasher at Saint-Ceré.[3] 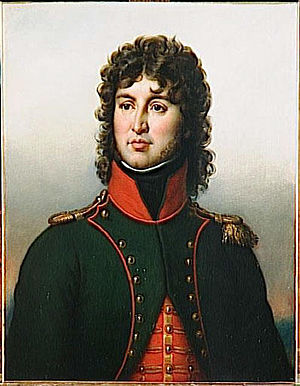 Joachim Murat as a sous-lieutenant of the 12th Chasseur-à-cheval; portrait by Jean-Baptiste Paulin Guérin

By 1790, he had joined the National Guard, and when the Fête of the Nation was organized on 14 July 1790, the Canton of Montaucon sent Murat as its representative. Then, he became reinstated into his old regiment. Part of the 12th Chasseurs had been sent to Montmédy to protect the royal family on its flight to Varennes, meaning regiment had to defend its honor and loyalty to the Republic; Murat and the regiment's adjutant made a speech to the assembly at Toul to that effect.[4] In 1792, he joined the Constitutional Guard, but left it that same year; his departure was attributed to various causes, including his constant quarreling and dueling, although he claimed he left to avoid punishment for being absent without leave.[5]

An ardent Republican, Murat wrote to his brother in 1791 stating he was preoccupied with revolutionary affairs and would sooner die than cease to be a patriot. Upon his departure from the Constitutional Guard, he reported to the Committee of Surveillance of the Constitutional Assembly that the Guard was guilty of treason and that his Lieutenant Colonel, a man named Descours, had encouraged him to serve in the émigré army of Louis Joseph, Prince of Condé, then stationed in Koblenz.[6] This garnered for him the support of the Republicans, for he rejoined his former regiment and was promoted to Corporal in April of that year, and to Sergeant in May.[7] By 19 November 1792, he was 25 years old and elated at his latest promotion. As a sous-lieutenant, he thought, his family must recognize that he had no great tendency for the priesthood, and he was hoping to prove that he had not been wrong in wishing to be a soldier. One of the Ministers had accused him of being an aristocrat, confusing him with the noble family of Murat d'Auvergne, an accusation that continued to haunt him for the next several years.[8]

In the autumn of 1795, three years after King Louis XVI of France was deposed, royalist and counter-revolutionaries organised an armed uprising. On 3 October, General Napoleon Bonaparte, who was stationed in Paris, was named commander of the French National Convention's defending forces. This constitutional convention, after a long period of emergency rule, was striving to establish a more stable and permanent government in the uncertain period after the Reign of Terror. Bonaparte tasked Murat with the gathering of artillery from a suburb outside the control of the government's forces. Murat managed to take the cannons of the Camp des Sablons and transport them to the centre of Paris while avoiding the rioters. The use of these cannons – the famous "whiff of grapeshot" – on 5 October allowed Bonaparte to save the members of the National Convention.[9] For this success, Joachim Murat was made chef de brigade (colonel) and thereafter remained one of Napoleon's best officers.

Further information: Italian campaigns of the French Revolutionary Wars and French campaign in Egypt and Syria 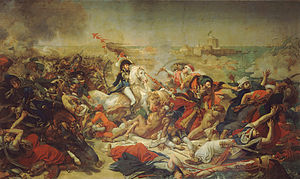 General Murat at the battle of Abukir, where 11,000 Ottoman soldiers drowned in the Nile

In 1796, with the situation in the capital and government apparently stabilised and the war going poorly (See also: French Revolutionary Wars), Napoleon lobbied to join the armies attempting to secure the revolution against the invading monarchist forces. Murat then went with Bonaparte to northern Italy, initially as his aide-de-camp, and was later named commander of the cavalry during the many campaigns against the Austrians and their allies. These forces were waging war on France and seeking to restore a monarchy in revolutionary France. His valour and his daring cavalry charges later earned him the rank of général in these important campaigns, the battles of which became famous as Bonaparte constantly used speed of maneuver to fend off and eventually defeat individually superior opposing armies closing in on the French forces from several directions. Thus, Murat's skills in no small part helped establish Bonaparte's legendary fame and enhance his popularity with the French people.

Murat commanded the cavalry of the French Egyptian expedition of 1798, again under Bonaparte. The expedition's strategic goal was to threaten Britain's rich holdings in India. (Some had been taken from France during the Seven Years' War). However, the overall effort ended prematurely because of lack of logistical support with the defeat of the French fleet due to British sea power (See: Battle of the Nile). After the sea battle, Napoleon led his troops on land toward Europe (via Palestine and thence Ottoman Turkey).

The remaining non-military expedition staff officers, including Murat, and Bonaparte returned to France, eluding various British fleets in five frigates. A short while later, Murat played an important, even pivotal, role in Bonaparte's "coup within a coup" of 18 Brumaire (9 November 1799), when Napoleon first assumed national power. Along with two others (including Director Abbé Sieyès), Napoleon Bonaparte set aside the five-man directory government, establishing the three-man French Consulate government.

Murat married Caroline Bonaparte in a civil ceremony on 20 January 1800 at Mortefontaine and religiously on 4 January 1802 in Paris, thus becoming a son-in-law of Letizia Ramolino as well as brother-in-law to Joseph Bonaparte, Napoleon I of France, Lucien Bonaparte, Elisa Bonaparte, Louis Bonaparte, Pauline Bonaparte and Jérôme Bonaparte. 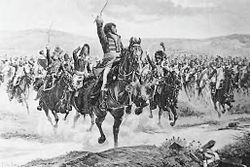 Napoleon made Murat a Marshal of France on 18 May 1804, and also granted him the title of "First Horseman of Europe". He was created Prince of the Empire in 1805, appointed Grand Duke of Berg and Cleves on 15 March 1806 and held this title until 1 August 1808, when he was named King of Naples and Sicily. He was in charge of the French Army in Madrid when the popular 2 May uprising that started the Peninsular War happened.

Murat was equally useful in Russian Campaign of 1812 and during the German Campaign of 1813 in the Battle of Leipzig. However, after France's defeat at Leipzig, Murat reached an agreement with the Austrian Empire in order to save his own throne.

During the Hundred Days, he realized that the European powers, meeting as the Congress of Vienna, had the intention to remove him and return the Kingdoms of Naples and Sicily to their pre-Napoleonic rulers. Murat deserted his new allies before the War of the Seventh Coalition and, after issuing a proclamation to the Italian patriots in Rimini, moved north to fight against the Austrians in the Neapolitan War to strengthen his rule in Italy by military means. He was defeated by Frederick Bianchi, a general of Francis I of Austria, in the Battle of Tolentino (2–3 May 1815). 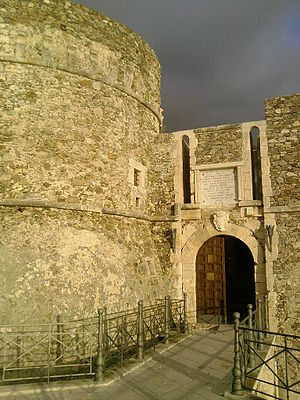 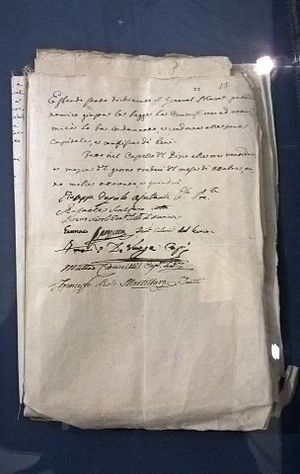 Murat fled to Corsica after Napoleon's fall. Joined by around a thousand followers, he hoped to regain control of Naples by fomenting an insurrection in Calabria. Arriving at the Calabrian port of Pizzo, Murat attempted to rally support in the town square, but things went very wrong. The crowd was hostile and he was attacked by an old woman blaming him for the loss of her son. Calabria had been badly hit by Murat's repression of local piracy and brigandage during his reign.

Forces of the king, Ferdinand IV of Naples, arrested him, and he was put on trial for treason. He was eventually sentenced to death by firing squad at the Castello di Pizzo, Calabria. 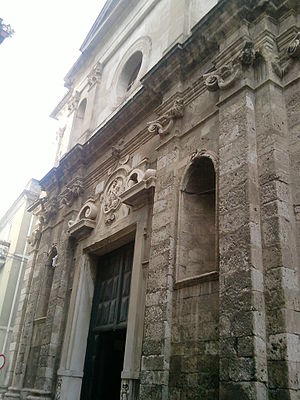 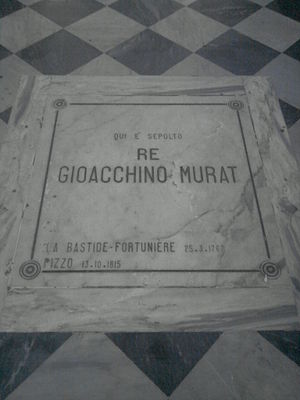 The gravestone in the centre of the nave in St.George's Church in Pizzo Calabro honouring Joachim Murat's burial place.

When the fatal moment arrived, Murat walked with a firm step to the place of execution, as calm, as unmoved, as if he had been going to an ordinary review. He would not accept a chair, nor suffer his eyes to be bound. "I have braved death (said he) too often to fear it." He stood upright, proudly and undauntedly, with his countenance towards the soldiers; and when all was ready, he kissed a cameo on which the head of his wife was engraved, and gave the word — thus,

"Soldiers! Do your duty! Straight to the heart but spare the face. Fire!"[10]

Murat is honoured in a chenotaph in Père Lachaise Cemetery in Paris, but of course he is not actually buried there. Even though someone says his body was lost or destroyed after his execution[citation needed] or others[who?] that he was buried in a church in Pizzo, making the removal of his body possible later on. His body was actually buried not far from his execution place, in a common grave placed beneath the floor of St.George's Church in Pizzo Calabro. There, in the centre of the nave a gravestone still honours him saying here is buried King Joachim Murat.

Murat and Caroline had four children:

In the 1941 Errol Flynn movie They Died With Their Boots On, a fictional account of the life of George Armstrong Custer, Murat is credited with being Custer's role model.

Murat is included as a minor character in Tolstoy's War and Peace, introduced in the prelude to the battle of Borodino.

William R. Forstchen's novel, The Forgotten War, establishes that Murat has a descendant, Commodore Lucien Murat, who lived in the 22nd and 23rd centuries of the Star Trek universe. Commodore Murat was the commanding officer of the starship USS Verdun.