Joan, Lady of Wales and Lady of Snowdon, also known by her Welsh name of Siwan, (c. 1191 – 2 February 1237) was the wife of Llywelyn the Great, Prince of Wales and Gwynedd, effective ruler of most of Wales.

Joan was a natural daughter of King John of England. She should not be confused with her half-sister, Joan, Queen consort of Scotland.

Little is known about her early life. Her mother's name is known only from Joan's obituary in the Tewkesbury Annals, where she is called "Regina Clementina" (Queen Clemence); there is no evidence that her mother was in fact of royal blood. Joan may have been born in France, and probably spent part of her childhood there, as King John had her brought to the Kingdom of England from Normandy in December 1203 in preparation for her wedding to prince Llywelyn ab Iorwerth.

Thomas Pennant, in "Tours in Wales", Volume 2, published London, 1810, writes : "It is said that Llewelyn the Great had near this place [Trefriw] a palace; ... The church of Trefriw was originally built by Llewelyn, for the ease of his princess, who before was obliged to go on foot to Llanrhychwyn, a long walk among the mountains."

Joan married Llywelyn the Great between December 1203 and October 1204. The wedding was celebrated at St Werburgh's Abbey in Chester. She and Llywelyn had at least two children together:

Some of Llywelyn's other recorded children may also have been Joan's:

In April 1226 Joan obtained a papal decree from Pope Honorius III, declaring her legitimate on the basis that her parents had not been married to others at the time of her birth, but without giving her a claim to the English throne.[2]

At Easter 1230, William de Braose, who was Llywelyn's prisoner at the time, was discovered with Joan in Llywelyn's bedchamber. William de Braose was hanged on 2 May 1230, according to local folklore at Abergwyngregyn; the place was known as 'Gwern y Grog'. A letter from Nicholas, Abbot of Vaudy, suggests that the execution took at Crogen near Bala (crogi = to hang).[3]

Joan was placed under house arrest for twelve months after the incident. She was then, according to the Chronicle of Chester, forgiven by Llywelyn, and restored to favour. She may have given birth to a daughter early in 1231.

Joan was never called Princess of Wales, but, in Welsh, "Lady of Wales". She died at the royal home at Abergwyngregyn, on the north coast of Gwynedd, in 1237. Llywelyn's great grief at her death is recorded; he founded a Franciscan friary on the seashore at Llanfaes, opposite the royal home, in her honour. The friary was consecrated in 1240, shortly before Llywelyn died. It was destroyed in 1537 by Henry VIII of England during the Dissolution of the Monasteries. Joan's stone coffin can be seen in Beaumaris parish church, Anglesey. Above the empty coffin is a slate panel inscribed: "This plain sarcophagus, (once dignified as having contained the remains of Joan, daughter of King John, and consort of Llewelyn ap Iowerth, Prince of North Wales, who died in the year 1237), having been conveyed from the Friary of Llanfaes, and alas, used for many years as a horsewatering trough, was rescued from such an indignity and placed here for preservation as well as to excite serious meditation on the transitory nature of all sublunary distinctions. By Thomas James Warren Bulkeley, Viscount Bulkeley, Oct 1808" 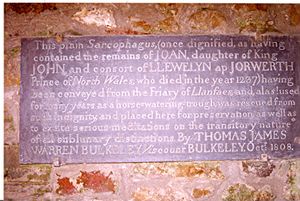 The slate panel at Beaumaris