Joan Beaufort, Countess of Westmorland (c. 1379 – 13 November 1440), was the fourth of the four children (and only daughter) of John of Gaunt, 1st Duke of Lancaster, and his mistress, later wife, Katherine Swynford. In her widowhood, she was a powerful landowner in the North of England.

She was probably born at the Swynford manor of Kettlethorpe in Lincolnshire. Her surname probably reflects her father's lordship of Beaufort in Champagne, France, where she might also have been born.[2] In 1391, at the age of twelve, Joan married Robert Ferrers, 5th Baron Boteler of Wem, at Beaufort-en-Vallée, Anjou. They had two daughters before he died in about 1395.

Along with her three brothers, Joan had been privately declared legitimate by their cousin Richard II of England in 1390. Her parents were married in Lincoln Cathedral in February 1396.[3] Joan was already an adult when she was legitimized by the marriage of her mother and father with papal approval. The Beauforts were later barred from inheriting the throne by a clause inserted into the legitimation act by their half-brother, Henry IV of England, although it is not clear that Henry IV possessed sufficient authority to alter an existing parliamentary statute by himself, without the further approval of Parliament. Soon after the legitimation, on 3 February 1397, when she was eighteen, Joan married Ralph de Neville, 1st Earl of Westmorland, who had also been married once before.

When Ralph de Neville died in 1425, his lands and titles should, by law of rights, have passed on to his grandson through his first marriage, another Ralph Neville. Instead, the bulk of his rich estate went to his wife, Joan Beaufort, even though the title Earl of Westmorland and several manors were passed to the grandson. This may have been done to ensure that his widow was well provided for, but by doing so, Ralph essentially split his family into two, and the result was years of bitter conflict between Joan and her stepchildren, who fiercely contested her acquisition of their father's lands. Joan, with her royal blood and connections, was far too powerful to be called to account, and the senior branch of the Nevilles received little redress for their grievances. Inevitably, when Joan died, the lands would be inherited by her own children.

Joan died on 13 November 1440 at Howden in Yorkshire.[3] Rather than be buried with her husband Ralph (who was not buried with his first wife, though his monument has effigies of himself and his two wives), she was entombed next to her mother in the magnificent sanctuary of Lincoln Cathedral. Joan's is the smaller of the two tombs; both were decorated with brass plates – full-length representations of them on the tops and small shields bearing coats of arms around the sides — but those were damaged or destroyed in 1644 by Roundheads during the English Civil War. A 1640 drawing of them survives, showing what the tombs looked like when they were intact, and side-by-side instead of end-to-end, as they are now.

Joan Beaufort was mother to Cecily, Duchess of York, and thus grandmother of Edward IV of England and Richard III of England, the latter defeated in battle by Henry VII in order to take the throne for himself. Henry then married Elizabeth of York, daughter of Edward IV, and their son became Henry VIII of England. Henry VIII's sixth wife, Catherine Parr, was also a descendant of Joan through Joan and Ralph's eldest son, Richard Neville, 5th Earl of Salisbury, and thus Henry's third cousin. The Earl of Salisbury was father to Richard Neville, 16th Earl of Warwick, "the Kingmaker" (father of Queen consort Anne Neville).

In 1391, at the age of twelve, Joan married Robert Ferrers, 5th Baron Boteler of Wem, at Beaufort-en-Vallée, Anjou. They had 2 children: 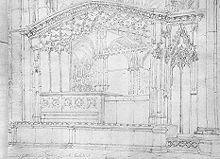