Joan II, Countess of Burgundy (French: Jeanne; 15 January 1292 – 21 January 1330), was the eldest daughter and heiress of Otto IV, Count of Burgundy, and Mahaut, Countess of Artois, and was Queen of France as the wife of Philip V of France.

Coat of arms of Joan II.

In the beginning of 1314, Joan's sister Blanche and her sister-in-law Margaret were convicted of adultery with two knights, upon the testimony of their sister-in-law, Isabella in the Tour de Nesle Affair. Joan was thought to have known of the affairs, and was placed under house arrest at Dourdan as punishment. She continued to protest her innocence, as did her husband, who had refused to repudiate her, and by 1315 – through the influence of her mother and husband – her name had been cleared by the Paris Parlement, and she was allowed to return to court.

With the death of King John I of France, her husband became King Philip V of France; Joan became queen consort. She was crowned with her husband at Reims on 9 January 1317.

After her husband's death, Joan lived in her own domains. It dealt her a devastating blow from which she never recovered, sinking into a deep depression for the rest of her life. After her beloved sister died in 1324, she was said to be "so sorrowful as never before she had been." She died at Roye-en-Artois, on 21 January 1330, and was buried in Saint-Denis beside her husband. Her titles were inherited by her eldest daughter, Joan III, who had married Odo IV, Duke of Burgundy, in 1318. With Joan II's death, the County and Duchy of Burgundy became united through this marriage. The Counties of Burgundy and Artois were eventually inherited by her younger daughter Margaret in 1361.

Joan left provision in her will for the founding of a college in Paris; it was named Université de Bourgogne, "Burgundy University." 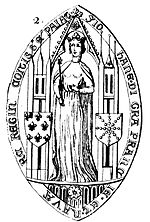 The seal of Joan II

With Philip V of France:

Joan (as Jeanne) is a character in Les Rois maudits (The Accursed Kings), a series of French historical novels by Maurice Druon. She was portrayed by fr (Catherine Rich (actress); Catherine Rich) in the 1972 French miniseries adaptation of the series, and by Julie Depardieu in the 2005 adaptation.[1][2]