Joan of Bar, Countess of Surrey

Joan of Bar (died in 1361, London) was a daughter of Henry III, Count of Bar and Princess Eleanor of England,[1] and niece of Edward II of England. She was unhappily married to John de Warenne, 7th Earl of Surrey. In 1345, Joan became the regent of Bar for her great-nephew Robert.

Joan was close in age to her older brother, Edward I, Count of Bar.[2] 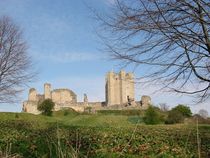 Joan lived in Conisbrough Castle for some time because her husband abandoned her.

On 25 May 1306, at ten or eleven years old, Joan was married to one of the leading nobles of England, John de Warenne, 7th Earl of Surrey,[3] a "nasty, brutal man with scarcely one redeeming quality."[4] She lived at the Warenne family estates, Conisbrough Castle and Sandal Castle, abandoned by her husband, who hated her and since 1313 had been trying to divorce her.[5] In England, she was close to Isabella of France, her aunt by marriage (Isabella’s husband Edward II was Joan’s maternal uncle) who was about her same age, and spent time with her at court. She was probably close to her cousin Elizabeth de Clare, who left Joan an image of John the Baptist in her will.

After four unhappy years of marriage, Surrey alleged in 1314 that the union was unlawful because Joan was related to him in the third and fourth degree, and because he had been "precontracted" to Maud of Nerford, his longtime mistress and the mother of his children, before marrying Joan. Despite his claims, a divorce was never granted.[6]

In 1345, Joan was invited by Philip VI of France to act as regent of the County of Bar.

In 1353, she returned to England. When John II of France was captured and imprisoned in London, she was allowed to visit him and is said, however unlikely the notion, to have become his mistress, at 56 years old.

In conspiracy theories, such as the one promoted in The Holy Blood and the Holy Grail, Joan of Bar has been alleged to be the fifth Grand Master of the Priory of Sion.